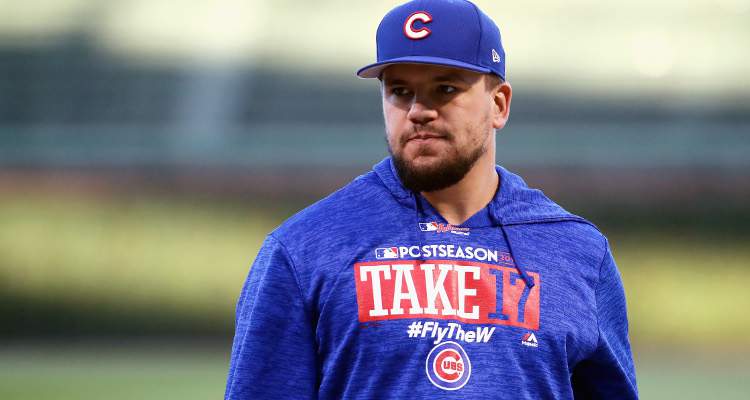 The Chicago Cubs put Kyle Schwarber in the spotlight with his new physique. But with all the attention on him, Kyle Schwarber’s girlfriend might have to fend off some fans for her man! Who is Kyle Schwarber dating? Paige Hartman is the lucky lady to be called his girlfriend and we’ve got the scoop on her here!

Kyle Schwarber is ripped! The Chicago Cubs slugger is preparing to step in the batter’s box looking better than ever!

The Cubs released a workout montage of Schwarber lifting weights and hitting off a batting tee that would fit perfectly in a Rocky movie. The outfielder’s jaw-dropping physical transformation has made Cubs fans go wild! Schwarber’s girlfriend, Paige Hartman, is the object of envy as she’s the lucky lady who gets to call the MLB player her beau! Find out all about the lucky WAG, right here.

Kyle Schwarber is from Middletown, Ohio, where he attended Middletown High School. He’s known Paige Hartman since they both attended the same high school growing up and have been dating since 2010.

Schwarber went to Indiana University while Hartman pursued a degree in early childhood education from the University of Cincinnati. She also went to Paul Mitchell School (a beauty school in Cincinnati) and graduated in 2015.

The high school sweethearts made their long-distance relationship work and are still going strong today. Hartman’s both a fan of the Chicago Cubs (for obvious reasons) and the Cincinnati Reds. Fortunately, a little team rivalry didn’t come in the way of their love!

Hartman was the one who stayed by his side when he was recovering from a serious knee injury in 2016.

Curious how @kschwarb12 transformed his body this offseason?

Rise and shine with him at 9 a.m. tomorrow. pic.twitter.com/XcI0OgMn1e

There’s not much information on Hartman, and neither of them are very active on social media, either. Their Instagram and Twitter accounts have been inactive for more than a year. They probably prefer to keep their relationship out of the public eye.

Internet denizens have found a handful of pictures of the young MLB player and his girlfriend from a school dance. The only time Hartman posted pictures was way back in 2015. In one, the couple appears to be at an event for the Motte Foundation, and in another, she’s holding a leopard cub at the Cubs’ home in Wrigley’s Stadium.

So crazy I got to hold this little guy! Such a fun day with my love @kschwarb12 and our cubs family! pic.twitter.com/KEFH6Me5jz

She’s All about Her Man

Although she is inactive, Hartman used social media to proclaim her love for her man. On Paige Hartman’s Twitter account, she once posted that the 24-year-old is “the love of my life.” And if that doesn’t show how much she loves him, she described her man on Facebook:

“Find a guy who calls u beautiful instead of hot, who calls u back when u hang up on him, will stay up just to watch u sleep,” she writes as her favorite quote. She added, “Wait for the boy who kisses ur forehead, who wants to show u off to the world, who holds ur hand infront of his friends, who thinks ur just as pretty w/out makeup on. One who is constantly reminding u of how much he cares&how lucky he is to have u. One who turns to his friends&says, thats her ♥ I HAVE THIS GUY!!!!! 😀 ♥ [sic]”

This couple is too cute for words and it’s nice to see this MLB star has a world of support behind him in Hartman!

Such a fun event! So happy @kschwarb12 and I could be apart of it! @MotteFoundation pic.twitter.com/uWazdOg6Lk