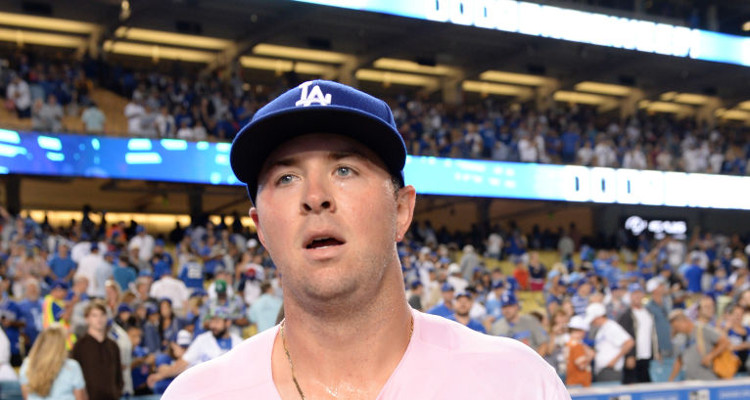 It looks like professional baseball catcher, Kyle Farmer of the Los Angeles Dodgers was the star of Sunday’s game! Farmer’s two-run double in the 11th inning helped his team win the game against the San Francisco Giants, and the walk-off win has certainly earned Farmer some great attention. We’ve got all the details you need to know about him, right here.

It’s celebration time for Kyle Farmer and the Los Angeles Dodgers! After beating the Giants with a score of 3-2, Dodgers manager Dave Roberts said, “For his family to be here, to have the field stormed by his teammates, coaches, manager, it was something so special,” adding, “I think our players felt his excitement.”

Farmer was more than thrilled about the win saying, “I was just hoping get a good pitch to hit.” He added, “Watching these guys hit the past three games I’ve learned a lot. It’s fun to watch them. I was just trying to put something in the air, hopefully down the line. I did, just got lucky with a good swing.” If you are wondering who Kyle Farmer is and want to learn a little more about him, continue reading our Kyle Farmer wiki.

James Kyle Farmer was born on August 17, 1990 in Atlanta, Georgia, making Kyle Farmer’s age 26. He graduated from Marist School in Atlanta, where he played football and baseball. While in school, Farmer made an appearance in The Blind Side. Though Kyle Farmer is engaged, no details about his fiancée are known at this time.

While studying at the University of Georgia, Farmer played shortstop, recording a .968 fielding percentage, which was a record for the school. Despite being drafted by the New York Yankees in the 35th round of the 2012 MLB draft, Farmer did not sign the contract.

He was signed by the Los Angeles Dodgers during the 8th round of the 2013 MLB Draft. After joining the team, he became a catcher. Farmer’s professional debut was in 2013, with the Ogden Raptors of the Pioneer League. The next year, he was promoted to the Great Lakes Loons of the Midwest League.

After playing 57 games with Great Lakes, he was promoted yet again to the Rancho Cucamonga Quakes of the California League. In 2015, Farmer was a part of the mid-season All-Star team. However, he could not play because he was being promoted to the Double-A Tulsa Drillers of the Texas League. Later that year, his career got a major boost as he got the opportunity to represent the Dodgers at the All-Star Futures Game. He played a total of 76 games for Tulsa and soon played in their midseason all-star game. In 2016, he played almost 74 games for the Drillers.

Earlier this year, Farmer was promoted to the Triple-A Oklahoma City Dodgers. His big break came recently, as he was promoted to the major leagues on July 28, 2017. His even bigger break may have come two days later during his first major-leauge at-bat, where he hit a two-run double! All eyes are on him now, and though Kyle Farmer’s net worth has not yet been calculated, it is sure to rise now that he’s making waves in the MLB.