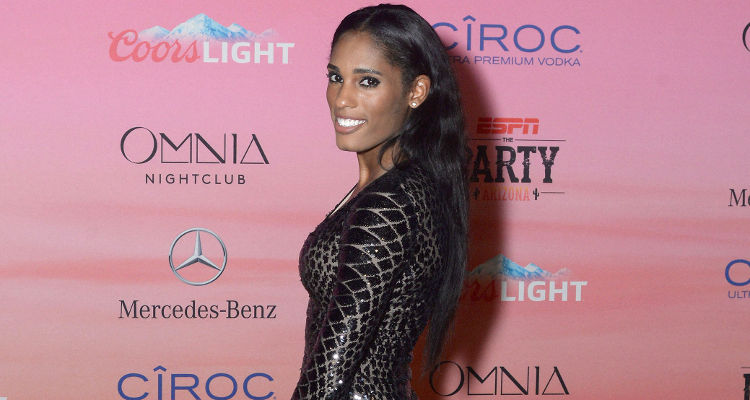 No country has ever swept the podium in the history of the Olympics, but as the American women Olympians have proved time and again, they are a force to be reckoned with. In the women’s 100m hurdles event, Team U.S.A effortlessly picked up all three medals; Briana Rollins won the Gold (12.48 seconds), Nia Ali secured the silver (12.59 seconds), and Kristi Castlin (12.61 seconds) bagged the bronze. It was definitely a race to remember, as the tremendously talented trio took home all the medals in this race. With her trademark Rhinestone Bindi perched on her forehead, Castlin clinched the bronze medal, with a perfectly-timed lean. You go, girls!

If you stay ready…. You won’t ever have to get ready! #gameface #rio2016 #teamhollywood #trackgirltuesday #track #hurdles #teamusa #fitness

#2 Castlin’s Father Was Murdered When She Was Only 12

Castlin’s childhood tragedy proves that she is no stranger to facing hurdles. A young pre-pubescent Kristi, lost her father to gun violence on December 7, 2000. Rodney Castlin was a 36-year-old hotel manager, who was shot and killed by two robbers that barged in, demanding money. One thief jumped over the counter and murdered Kristi’s father in cold blood for only $304.

However, the Castlin family got justice at last, albeit 14 years later, when the culprit James Lorenzo Randolph was convicted and sentenced to three life sentences, plus 35 years. Although Kristi’s parents were divorced at the time, the loss was devastating, and she lamented, “Sometimes as a kid, you really can’t process it. As you get older, you need your dad. I experienced sadness because…I would like my father to be here, or I would like for him to see these races and these experiences.”

#3 She Witnessed the Virginia Tech Massacre in 2007

Kristi faced gun violence for the second time in her life when she was a student at Virginia Tech. She won a track scholarship to Virginia Tech. Barely a week after her track team won an ACC Championship, a gunman stormed onto the Virginia Tech campus, opened fire and killed 32 students. Naturally, the tragic incident left a deep and profound impact on the young girl, and she dedicated her win at the Olympic Trials to all the victims of gun violence everywhere.

Castlin announced “I really just want to dedicate this race to every single family, every person who has to go on after losing someone they love to gun violence… It really was heavy on my heart, so I really wanted to dedicate that to everyone in the world who’s had to deal with that,”

#2 She Began Running Track and Field at 14 Years Old

Castlin started running track and field at a comparatively older age, as she initially focused all her efforts on becoming a cheerleader in high school. According to her mother Kim Castlin, the Douglasville native began her Olympic dream in the ninth grade, revealing, “We went to the state meet and Kristi didn’t win, and she said, ‘I’m never losing again. I’m going to focus in on this.’ And she just went straight like tunnel vision.”

#1 She is an All-Rounder

Besides being a two-time state champion, Castlin didn’t let her athletics interfere with her academics. She graduated from high school with a 4.0 GPA and won a track scholarship to many prestigious institutions. The dynamo graduated from Virginia Tech in 2010, with a Bachelor of Science degree in Political Science and Government Legal Studies.

Castlin confessed, “I had a lot of other offers from some really strong track and field institutions, but the fact that Virginia Tech wasn’t really on the map for track and field really influenced my decision to come here. It was interesting to think that I could really contribute to the growth of track and field here.” Castlin even worked as an Ambassador of Sport in Guyana in 2014, to inspire young athletes by training and conducting workshops. She described qualifying for the Olympics as feeling “like a movie.”

#tbt ….. I was the queen of sunglasses. Maybe I should run it back? ???? ???? #roadtorio #tracknation #hurldes #run #hokies #oakleytraining