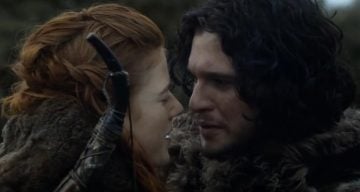 If you thought that Jon Snow and his wildling lover Ygritte were never going to be together again, then you had it all wrong! Although we know the two had the worst possible ending on  Game of Thrones, Kit Harington and Rose Leslie’s love story is reportedly taking the next step! Read on for all the details.

Kit Harington and Rose Leslie are reportedly engaged. Yes, you read that right! They made our Game of Thrones dreams come true after all. Reports are flooding in about Harington popping the question to his girlfriend of five years earlier this summer. We can only imagine how she responded! The wedding is reported to be next summer, and what an event that will be. Scroll down for the juicy details about Kit Harington and Rose Leslie’s love life.

What Is Your Name, Wildling?

It was all the way back in 2011 when Kit Harington and Rose Leslie met on the set of GoT in Iceland during the winter. The two were instantly close, and constantly spotted together once filming wrapped up.

It was in 2012 that sources confirmed their on-screen chemistry was taken off-screen after they were seen holding hands in restaurants. By this time, the love story between their characters Jon Snow and Ygritte had reached new heights. And with such a bold romance on-screen, it seemed almost too good to be true that they fell in love in real life, too.

Although the couple kept their relationship a huge secret, fans were going wild with every leaked picture and piece of news they could find. Harington later revealed that he fell in love with Leslie while filming their steamy scenes!

Well, fans hoped this would happen way before it did. And, unlike many GoT theories, George R.R. Martin can’t prove this one wrong!

You Know Nothing, Jon Snow!

Harington was head-over-heels for Leslie, but the only thing fans had to go on was speculation and hope. Both he and Leslie have been notoriously private about their relationship, and though some might say they could have hid it better, others were starting to doubt the pictures floating online.

People really began wondering about the couple’s relationship status after Harington said in an interview, “Me and Rose are very, very close and very good friends, and continue to be, actually. She’s wonderful. But no, no love affair.”

It was around that time when fans saw Ygritte die in Jon’s arms on GoT, making them think that it really was over between Harington and Leslie as well.

But in July 2014, Harington and Leslie were spotted at the airport together on their way to the San Diego Comic-Con. Their chemistry was undeniable, and rumors about their secret romance resurfaced.

They Should Have Stayed in That Cave

Or maybe not, considering the couple are now living in a multi-million-dollar home. It is reported that Kit Harington bought a $2.3-million mansion so he could settle down with Leslie before getting married. Sources say that he always knew he wanted to marry Leslie, but also wished to live together before popping the question.

The couple moved into their new home in East Anglia in January. Harington wanted his fiancé to feel at home, “I said to her, cause she’s moved into my house, ‘Look darling, it’s important that this is our space. That it feels like our space. That you haven’t just moved into mine. Move anything you want around, change anything, chuck anything out.”

Rumors of the two getting engaged surfaced earlier this summer, but the couple were quick to deny them. Now it is being reported that they told their friends and family of their engagement last week.

When asked about their relationship at the GoT season 7 premiere, Harington said, “I think that’s the really special thing about it is that we met on this show and here we are seven years down the line back here promoting season seven, I mean it’s mad. It’s such a special thing. I’m so privileged.”

Although reps for both stars have denied the rumors, fans don’t want to believe their denials.

But sources added that The Good Fight actress wants a proper wedding in true Scottish style, complete “with kilts and bagpipes!” Although neither actor has publicly spoken out about the latest engagement rumor, fans are excited that their favorite GoT couple are still going strong off-screen!