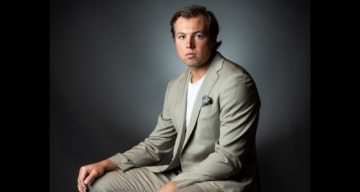 Charlie McAvoy poses for a portrait for the NHL Player Media Tour on September 17, 2021 in Chicago, Illinois. (Photo by Chase Agnello-Dean/NHLI via Getty Images)

Boston Bruins’ Charlie McAvoy is dating the daughter of a Bruins legend. Kiley Sullivan’s connection to the Bruins goes way beyond dating their defenseman. Now her father is known as the head coach of the Pittsburgh Penguins. And the Twitterati have questions. They want to know which team Kiley Sullivan cheers for. And perhaps if Chucky Bright Lights would ever be on the same team as Kiley’s dad now that his contract is up for negotiation. The burning questions are: Who is Kiley Sullivan, and what does she do? We reveal all about her background and her relationship with Charlie McAvoy in this Kiley Sullivan wiki.

Kiley Sullivan was born on April 9, 1997. She is one of three children born to Mike and Kate Sullivan.

Mike was playing with the Boston Bruins when Kiley was born. When he retired and turned to coaching, he was appointed as head coach of the Bruins.

Mike and his wife Kate, a nurse by profession, raised their children Kaitlin, Matthew, and Kiley in Duxbury, Massachusetts. Kiley currently lives in Boston while her father is head coach of the Pittsburgh Penguins.

After graduating from Duxbury High School, Kiley chose to attend Boston University where her father is an alum.

She earned a BS in health professions and related clinical sciences and a minor in communications in 2019.

Kiley had experience interning in pediatrics. She was also involved in promotional work for businesses like Wheels Up.

Since 2019, Kiley has been a key leader with Lululemon. She and her sister Kaitlin also promote New Balance.

Kiley’s mother Kate had taken a step back from nursing when Mike took up the job with the Penguins. During the pandemic, however, she considered volunteering in vaccine administration but resisted, fearing that she might spread the COVID-19 virus to the Penguins locker room.

Nonetheless, Kiley is drawn to her mother and grandmother’s profession in healthcare. Mike is mighty proud that his youngest child is working towards a nursing license at the Massachusetts General Hospital in Boston.

New York native and Rangers fan Charlie McAvoy signed with the Providence Bruins, Boston’s AHL development team, in 2017. By then, he had already made his relationship with Kiley social media official on her birthday in 2016.

McAvoy made his NHL regular season debut in 2017.

Kiley and McAvoy attended Boston University together before he joined the NHL. Not only is he dating the daughter of a Bruins legend, but Mike’s longtime association with the Boston University Terriers meant he’d had his eye on McAvoy since he was a rookie.

“He’s one of the bright young defensemen in the league,” Coach Sullivan said about rookie Charlie McAvoy. “He’s a good, solid two-way defenseman, and for a guy that’s as young as he is (20), to make the impact that he has on this team speaks volumes for how good a player he is.”

The burning question for NHL fans, though, is who does Kiley Sullivan cheer for—the Bruins or Penguins?

Unfortunately for us, she doesn’t display it on social media.