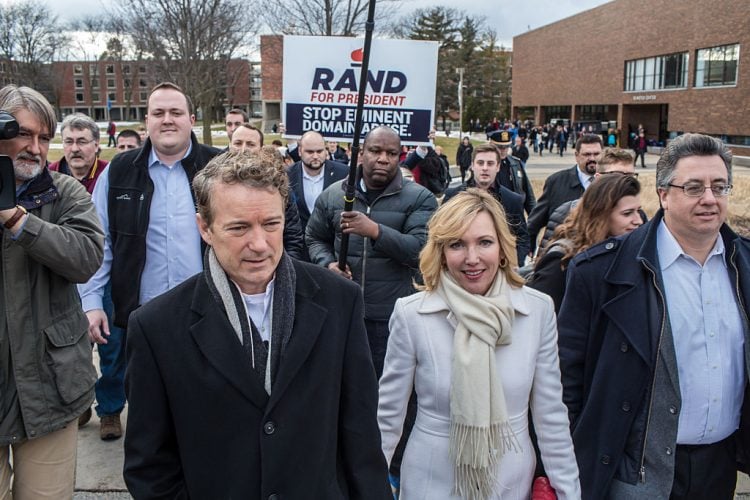 Rand Paul’s wife, Kelley Paul, just had to deal with one of the worst situations ever. Her husband was attacked the other day, sending him to the hospital with five broken ribs! Rand Paul and Kelley Paul have been married since 1990, but what do we know about Kelley Paul? We’ve decided to dig a little deeper and find out everything that we can about her from Kelley Paul’s kids to her age. Read all about Kelley Paul and her life with the junior senator from Kentucky.

Born Kelley Ashby on September 3, 1963, in Russellville, Kentucky, Kelley Paul’s age is 54. Being the daughter in a military family meant that she grew up all over the place, as the family was constantly moving.

Paul ended up graduating from Russellville High School. From there, she went on to Rhodes College in Memphis, Tennessee, where she studied English and communications. She ended up taking English due to her love of reading, especially the Little House on the Prairie series by Laura Ingalls Wilder.

In 1988, Paul attended a backyard BBQ in Atlanta that changed her life. It was there that she met Rand Paul, who she had mistaken as a teenager at first, due to his young looks.

At the time, Rand Paul was 26 and a doctor. He asked for her telephone number and never even wrote it down, he just kept it in his memory as she recalls. Little did she know that this would turn into a relationship.

The couple dated for two years before marrying on October 20, 1990. They settled in Bowling Green, Kentucky, where they have made their main residence ever since.

Together, the Pauls have three children. They are all boys named William, Duncan, and Robert.

A Life in Politics

Rand Paul had been involved in politics long before he ever met his future wife. His father, Ron Paul, had been in politics for many years as part of The Libertarian party and then as a Republican in Congress. He also made a few attempts at running for the office of President.

Paul helped his father on those many campaigns and managed the campaign that brought his father back to office in 1996. So, it came as no surprise when Paul ran for the U.S. Senate in 2010, with his wife at his side.

Kelley Paul is on the campaign trail! Don't miss your chance to meet her and Senator Paul: randpaulforpresident.eventbrite.com

Rand Paul eventually made a short-lived bid for presidency during the 2016 elections. It was during this time that Kelley Paul would rediscover her love of writing.

Great turnout at the #EKU Students for Rand Rally! Exciting to see so many young liberty lovers #StandwithRand

Kelley Paul has been working with her husband on the sidelines of his political endeavors over the years. She has written pamphlets, newsletters, and pieces for his mailing lists. There were also times where she served as his bookkeeper.

In 2015, Kelly Paul wrote her first book, True and Constant Friends: Love and Inspiration from Our Grandmothers, Mothers, and Friends. It’s a nonfiction book where she discusses the influence that her long-time friends had on her, as well as their role models and influences.

Kelley stood by her husband during his 2016 presidential campaign. But this time, she got involved with his speeches, exercising a different writing muscle than she had previously used.

Join me in the fight for liberty and a government that leaves you alone: randpaul.com/volunteer

So, what does Kelley Paul do to unwind on her days off from politics and being a mom? She has cited bird watching as one of her favorite hobbies, as well as cooking.

Despite the very public nature of their lives, Rand and Kelley Paul keep much of it personal. After a quick search, we haven’t found any public Kelley Paul Instagram accounts or other social media.

On the other hand, Rand Paul does maintain an Instagram account, but it’s rarely updated. So, you can find some Kelley Paul pics there, instead.

I'm taking the night off to celebrate 26 years of marriage to my amazing wife, Kelley Paul. Happy Anniversary, Kelley. I love you ?