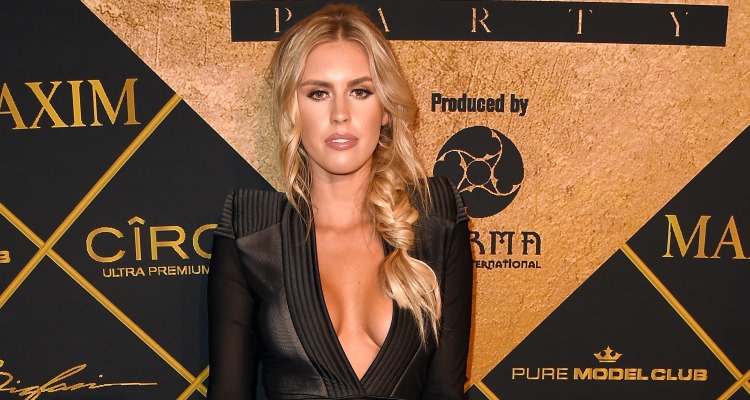 Ryan Lochte’s wife (soon-to-be), Kayla Rae Reid, is pregnant and she took to social media to make the grand announcement! The adorable photo shows Kayla Rae Reid and Ryan Lochte underwater in a swimming pool, as he kisses his wife’s baby bump. Here are some fun facts about his fiancée!

In the photo, Reid (@kaylaraereid) happily wrote, “Just when you think you think you have it all figured out, life always surprises you with blessings when least expect it. So excited to share this news with all of you! #weareprego #omg #2017.” The photo already has 11.2 thousand likes, and over 200 comments from fans wishing them success, sharing their excitement, and asking questions about their due date. If you want to learn more about the Olympic swimmer’s beautiful fiancée, keep reading our Kayla Reid wiki.

She is Engaged to an Olympic Swimmer

Ryan Lochte is not only a competitive American swimmer, he is also a 12-time Olympic medalist with six gold, three silver, and three bronze medals. He is ranked in second in swimming behind Michael Phelps. Lochte was born in Rochester, New York on August 3, 1984. During the 2016 Summer Olympics, the swimmer announced his relationship with model Reid and they were officially engaged in October 2016.

According to People, Lochte was dutifully prepared for his proposal saying, “I practiced it so many times in my bathroom,” he said. “But when it actually happened, I couldn’t get the ring out of my pocket and then I was stumbling on all the words and clammy. I finally got the courage to say, ‘Will you marry me?’ And she said yes and then I was, like, ‘Yes! My life is complete.’” Check out Kayla Rae Reid’s engagement ring! It’s Beautiful!

Speechless. Absolutely beautiful. So in love with YOU. ❤️

She is Having Her First Child

On December 14, 2016, the couple took to social media to announce that they are expecting their first child. Lochte (@ryanlochte) wrote “My Christmas gift came early this year, can’t wait for next year! Best news I’ve ever received #CLOUD9 #excited #family #love #2017.” His photo received 96.8 thousand likes and over 2,000 people commented on the photo, sharing their excitement. Reid told Us that her fiancée “wants kids really badly” and that the subject of kids has been a part of “early conversation” between them. “We want to create a family of our own,” Lochte told US. “I think that’s something that’s really important to us, as well.”

She is a Model

Born July 5, 1991 in Fairfax, Virginia, Reid is a model and was the Playboy “Playmate of the Month” for July 2015. The 25-year-old stands at 5 ft. 7 in and weighs 125 lbs, and often shares beautiful selfies on Instagram. Kayla Rae Reid’s net worth is estimated to be $800 thousand.

Shortly after their engagement, Us Weekly reported that she has been a solid support through some challenges Lochte faced in 2016, especially the Rio robbery scandal following the 2016 Olympics. He told the site, “She’s stuck behind me this whole entire time when I was at my darkest point and she was my rock. That’s when I knew, I’m not letting this one go!” Fans are excited to see how this couple moves forward—their love is openly expressed via their social media profiles. With a baby on the way, their wedding plans may have to be sped up or delayed. Lochte told US backstage at Dancing With the Stars, “We’re not going to hurry up and get married really quick. We want to plan out everything . . . because I want to be a part of it!”

The couple is very fond of each other and it looks like they will make two loving parents. “She’s beautiful inside and out,” Lochte wrote on one of his Instagram photos. They are very open about their feelings for each other, sharing kissing photos, shots of them cuddling at home, couple selfies on date nights, and more. There are simply adorable!

Let’s hope Reid has a happy and healthy pregnancy and that the couple enjoys the months and years ahead! Fan can keep up to date on the couple’s adventures by checking out Ryan Lochte and Kayla Rae Reid’s photos on Instagram! We wish the two the best in the upcoming year, it looks like it’ll be an exciting one!

Just when you think you think you have it all figured out, life always surprises you with blessings when least expect it. So excited to share this news with all of you! ❤️??? #weareprego #omg #2017