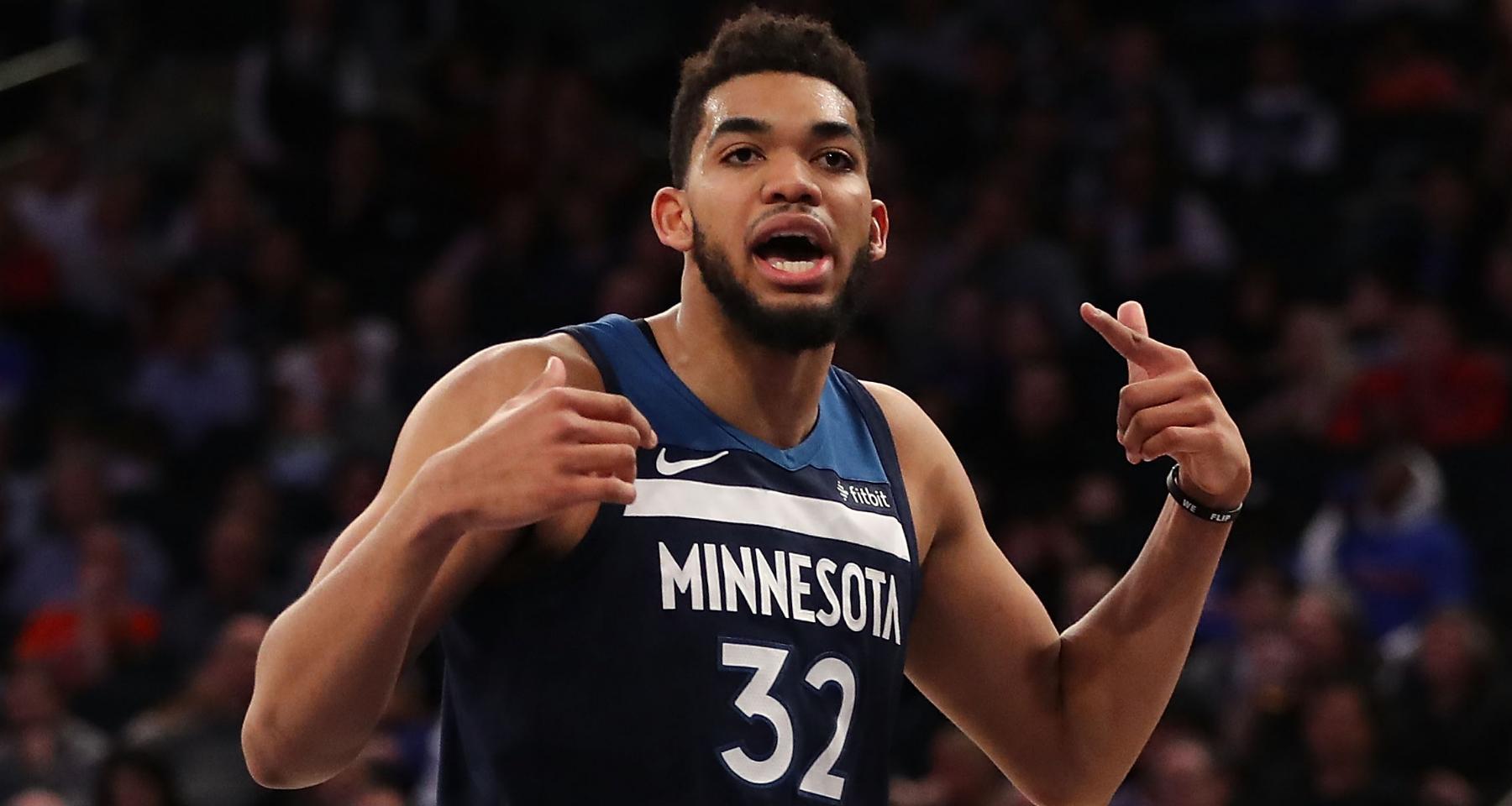 Karl-Anthony Towns #32 of the Minnesota Timberwolves reacts to a call in the second half against the New York Knicks (Photo: Abbie Parr/Getty Images)

The hostility between NBA pros Karl-Anthony Towns and Jimmy Butler got uglier with Towns’ ex-girlfriend, Kawahine Andrade, being dragged into the mess. Andrade was put on the map when she dated Towns a few months after he was named 2015-2016 NBA Rookie of the Year. But it appears that Kawahine Andrade and Karl-Anthony Towns have broken up, and it’s supposedly because of his rival, Jimmy Butler.

Jimmy Butler is reportedly not considering a contract extension with the Minnesota Timberwolves. And it’s alleged that it’s all thanks to a bitter feud with his teammate, Karl-Anthony Towns!

Now, some NBA fans are saying that Butler is asking to be traded out of the team because of Karl-Anthony Towns’ ex-girlfriend, Kawahine Andrade. But Towns and Andrade have shut down those rumors.

Nonetheless, Towns’ fans can’t help but speculate about his relationship status with Andrade. And we’ve got the scoop, right here!

Towns Slid Into Her DMs

Instagram model Kawahine “Kawa” Andrade, age 23, was born in Kailua-Kona, Hawaii on February 9, 1995. She grew up living an active lifestyle in the “Aloha State.”

Kawahine Andrade’s parents are Joni and Jason Loando, and they live in Kealakekua, Hawaii.

She caught the eye of NBA fans everywhere when she began dating Minnesota Timberwolves’ young player, Karl-Anthony Towns, in late 2016.

Towns once posted the entire process of getting Andrade’s attention on his Instagram story. As the story goes, Towns commented on one of Andrade’s Halloween posts and wrote that she is “one of the hottest fitness models in the world.” He then slid into her DMs and the rest is history!

They were often featured in each other’s Instagram feeds in the past. But now, their followers have noticed that this couple has scrubbed all traces of each other off their respective accounts.

Andrade has an Instagram account for her beloved dog, Bentley. Towns was last featured in a photo with Andrade and her fur baby on Bentley’s account in June.

She made her YouTube vlogging debut in January, where Karl was seen tagging along for her hair removal appointment. But since then, Andrade hasn’t posted any videos with Towns, or any more videos for that matter.

Andrade still has a couple of old posts on her account with Towns, but there’s no indication about their current relationship status.

Did She Cheat on Towns with Butler?

According to some reports, Butler and Towns don’t get along. It’s allegedly one of the factors why Butler has asked to be traded off to another team.

But fans seem to have another theory as to why Butler wants to leave the Timberwolves and stay away from Towns. Fans believe Andrade cheated on Towns with Butler, which may have led to their breakup!

The theory originated when the Timberwolves posted birthday wishes for Butler on Instagram on September 14.

An Instagram user allegedly commented, “Maybe he’ll celebrate with Towns’ girlfriend again.” The comment was deleted by the Timberwolves, along with a few other unsavory responses.

But the same user allegedly said that Butler and Andrade hooked up some time in May 2018. And around that time, there were fewer sightings of Andrade and Towns together.

However, this theory is nothing but speculation. Towns himself called it a hoax by subtweeting the article with “#FakeNews.”

Meanwhile, Andrade tweeted, “Ya’ll are silly,” supposedly in reference to this wild theory.

While it’s unclear if Andrade and Towns are still together, there wasn’t any cheating going on. And it’s pretty obvious Andrade is not a factor in Butler leaving the Timberwolves!

There’s a reason KAT called her the hottest fitness model. Signed with Nous Models LA, she’s been flaunting her toned physique on Instagram where she has over 77.5k followers and counting.

She is focused on her modeling career while taking up residence in California. Andrade has modeled for Fenty Beauty by Rihanna, Nike, Ofra Cosmetics, Proactive Sports, Ethika, Jen’s Pirate Booty, and Detox Organics.

She Plays Basketball Too

Andrade loves the beach and played water polo and volleyball at Konawaena High School, where she lettered in both sports. She led her high school team to the Big Island championship for four straight years and is a three-time state champion.

Andrade attended Orange Coast College in California, where she majored in fitness. She played basketball at Orange Coast before transferring to the Academy of Art University in San Francisco.

According to her college bio, Andrade had plans to work with children when her playing career ended. She specifically wanted to work in behavioral studies to help children with disorders.

Her Love of Horses Led Her to the Rodeo

Andrade also enjoys horseback riding and has ridden them in the rodeo since she was a child. Her family owns a ranch in Hawaii, and her dad trains horses.

She began riding horses at the age of two and competed in rodeos with her horse, Rope, when she turned five.

When she visits home in Hawaii, Andrade helps out her dad at the ranch.

I miss being a cowgirl everyday ? ??‍? Fun fact about me: I grew up riding horses since I was 2 years old, been competing in rodeos since I was 5 years old. My horse Rope has seriously been my childhood best friend and every chance I get to be back in Hawaii, I'm helping at my family's ranch, and helping my dad train horses and competing in rodeos. I live two complete different worlds lol

These days, the model is in the spotlight over rumors that she cheated on Karl-Anthony Towns with Jimmy Butler. Even though though they’ve denied the claims, only time will reveal what is really going on in their relationship.

Don’t you just love when sports and soap operas collide?