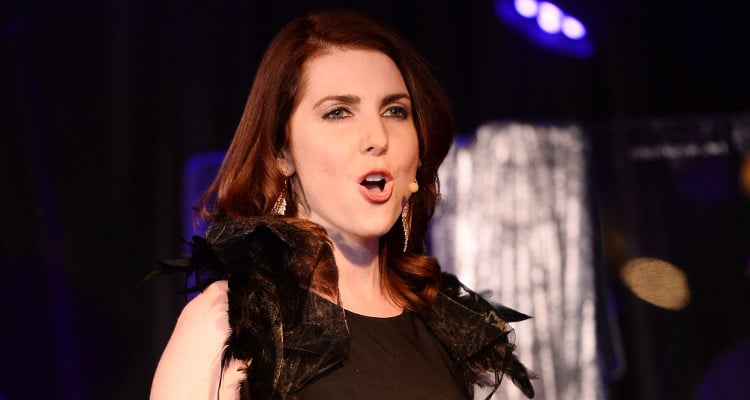 Kate McKinnon must have popped some champagne before heading over to the Emmys after-party! On Sunday night, the Saturday Night Live star won her second Emmy for her work on the popular sketch show. After getting on stage to accept the award, McKinnon started off her speech by saying, “Yikes, Being part of this season of Saturday Night Live is the most meaningful thing I will ever do. Congratulations to our incredible cast,” further adding, “Thank you to our amazing writers. It’s all about the writing guys. Especially Chris Kelly and Sarah Schneider, I love you guys so much.”

However, the music started to cut her off as she began thanking Hillary Clinton for her “grace and grit,” prompting McKinnon to thank her mother. A lot of viewers were disappointed that her speech was abruptly cut short, but are still happy that she won. McKinnon’s girlfriend, Marla Mindelle, has always been highly supportive of the actress’ career and success so they were shocked to see McKinnon there with another woman! Some are still wondering if Kate Mckinnon is gay, but by now it’s common knowledge that she is. And who is this lovely new woman on her arm? It’s not Marla Mindelle, prompting many to become curious about her. We’ve got all you need to know about Mindelle, right here.

Born on December 22, 1984, in Yardley, Pennsylvania, Marla Mindelle’s age is 32. She is a writer and Broadway star who, if her website is any indication, has a great sense of humor!

The good news is Shelley Long booked Cheers at 32 and Cybil Shepard booked Moonlighting at 35 so there's still time for me to star in my own 80s sitcom. ?????

In her “About Me” section, she writes:

“Hi. I’m rich. Marla is a loller, a baller and a shot caller. She was most recently seen as Phyllis Neffler in the Unauthorized Musical Parody of Troop Beverly Hills at Rockwell Table and Stage in LA. Before that, she starred in multiple Broadway shows including: Stepsister Gabrielle in the original Broadway cast of Cinderella, Sister Mary Robert in the original Broadway Cast of Sister Act and Ensign Cora Mcrae in South Pacific. Other credits include Kitty in the first national tour of The Drowsy Chaperone, Queenie in The Wild Party and Rona Lisa Peretti in The 25th Annual Putnam Spelling Bee. Marla is currently living in LA.”

According to sources, McKinnon and Mindelle started dating in 2013. But with no reports of a breakup, many fans were under the impression they were still an item. However, it seems the two have parted ways as McKinnon was seen at the Emmys last Sunday with a beautiful new woman!