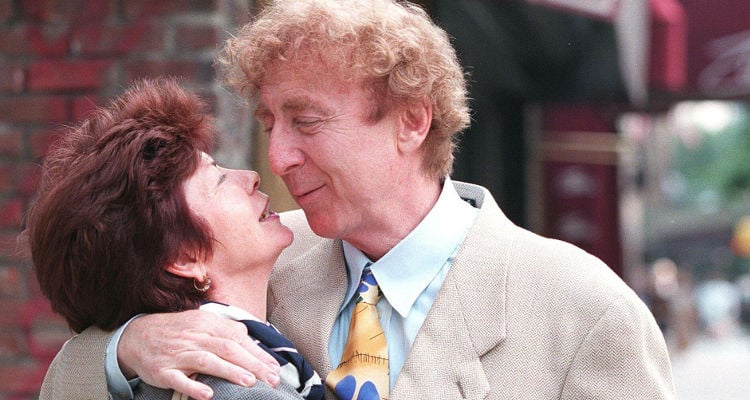 Gene Wilder’s death has left all of Hollywood and all his fans in a state of remorse. The actor, who starred in some of the most hilarious comedy movies ever made has passed on, and even though he brought us laughter and smiles for decades, the star’s passing at 83 years old still hit hard. Gene Wilder’s wife, Karen Boyer is undoubtedly feeling the most grief during this unfortunate time. Boyer is Wilder’s fourth wife and was with Wilder until his very end. People are now curious as to how many wives did Wilder have? For your information, there are three Gene Wilder’s ex-wives; Mary Mercier, Mary Joan Schutz and Gilda Radner. Gene Wilder’s ex-wife, Gilda Radner died of cancer in the year 1989.

People are asking, “Who was Gene Wilder married to?” At the time of his death, Wilder was married to Karen Boyer. The story about how they met is very interesting. Wilder met Boyer in 1988 when he was still married to his third wife, Gilda Radner. Wilder was heartbroken after the death of his third wife Radner due to cancer. In 1991, he met Boyer again and that changed everything. In the year 2002, Wilder revealed how he met Boyer on Larry King live. He said he was preparing for his role in the comedy film, See No Evil, Hear No Evil, where he played the role of a deaf man.

Wilder went to the New York League for the Hard of Hearing to do some research for his role, and for the film itself. There, he was introduced to Boyer, who taught him lip reading. Wilder was told to read lips by watching them on a monitor. Wilder says that he was attracted to Boyer straight away, but by the third meeting he was in love with her. In his own words, ‘It was like a flower blooming.” One day Wilder told Boyer to leave the tape-recorder and just meet him. That’s when Boyer knew that Wilder had fallen in love with her.

Wilder married Boyer on September 8, 1991. They stayed in Stamford, Connecticut in a 1734 Colonial home until his death. Wilder had earlier shared this home with Radner. Boyer and Wilder shared a close relationship. They spent their time painting watercolors, writing and participating in charity efforts. Boyer stood by Wilder’s side when he was diagnosed with lymphoma cancer in the year 1989. Wilder was healed from cancer and his wife gave him strong physical and moral support.

However, tragedy struck again years later when Wilder was diagnosed with Alzheimer’s disease. Again, Boyer took care of the actor. Wilder ultimately died of complications from the disease on August 29, 2016. Boyer also worked as a costume designer in Hollywood. She is a registered speech pathologist. Towards the end of his days, Wilder and Boyer mostly stayed indoors. On the rare occasions they left home, Boyer was always by his side.

‘Til Death Do Us Part

Wilder’s death at the age of 83 has left Boyer alone and heart broken. They did not have any children. Wilder’s adopted daughter, Katharine left Wilder a long time ago. So, it was Boyer who took care of Wilder until the very end. Only in death did they part.