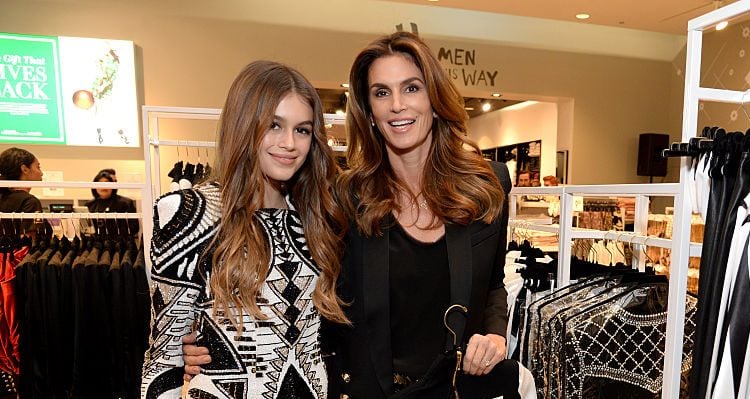 In case you missed it, Cindy Crawford’s daughter, Kaia Gerber, just landed her first solo Vogue cover! Modeling clearly runs in the family, but how much do we really know about the young modeling prodigy? For more information, have a look at our Kaia Jordan Gerber wiki.

Kaia Jordan Gerber, 16, was born to Cindy Crawford, 51, and Rande Gerber on September 3, 2001, in Los Angeles, California. Her father is a model-turned-entrepreneur, and her mother is famous for her supermodel days back in the ‘80s and ‘90s.

Gerber is represented by IMG Models. Her brother, Presley Walker Gerber, 18, is also a model.

Despite her hectic schedule, the young model is enrolled at Malibu High School and still makes time for her AP Calculus course.

In an interview with Vogue, Gerber talked about how she makes school a priority, despite her budding modeling career.

Gerber explained, “It’s really difficult, because you have a lot of different things going on. I go to school everyday, and that does come first. I use my free time for work, but because I love it so much, it doesn’t feel like work and I still have fun with it. I don’t really have days where I can sit and do nothing!”

Kaia Gerber was just 10 years old when she landed her first modeling job for Young Versace, Versace’s junior line. Six years later, she’s still in the family business, and she’s known as the girl to watch.

Her Mom Is Her Biggest Fan

Since Kaia Gerber has decided to follow in her mother (and father’s) footsteps, it only makes sense that Crawford is her biggest supporter.

“I just went with her on her first fashion season and I think the only advice I gave her was that you can only sleep five or six hours one night or two nights in a row,” Crawford told The Cut. “It’s cumulative — take the time to catch up on your sleep and have alone time.”

i just don’t see the resemblance

She Takes Her Brother’s Clothes

It looks like Gerber isn’t just modeling clothes for major fashion brands, as she doesn’t mind doing it for her brother as well—without his permission. We’re sure she has plenty of clothes of her own, in a closet that doesn’t close all the way, but there’s something about her big brother’s sweaters that just calls to her.

“Not like Yeezy sweatshirts or anything, but they’re just really good and worn in,” Gerber told Elle. “And since he’s bigger than me, they’re really oversized, which I love with skinny jeans. He’ll say, ‘Kaia, have you seen my stuff?’ And I’m like, ‘Nope, guess you just left it somewhere.’”

Isn’t that what little sisters are for?

If you’re looking for Kaia Jordan Gerber pics, then her Instagram is where you need to be. With over two million followers, the young model posts what she loves, her family, and of course, her Vogue Paris cover for February’s issue.

Cindy Crawford was 20 when she first graced the cover of Vogue. And now, Kaia Jordan Gerber beat her mother’s record by four years.

I MUST BE DREAMING. to @vogueparis and everyone who made this cover possible… THANK YOU! ? and to @emmanuellealt and @davidsimsofficial, you made me the happiest girl in the world. ? SO MUCH LOVE