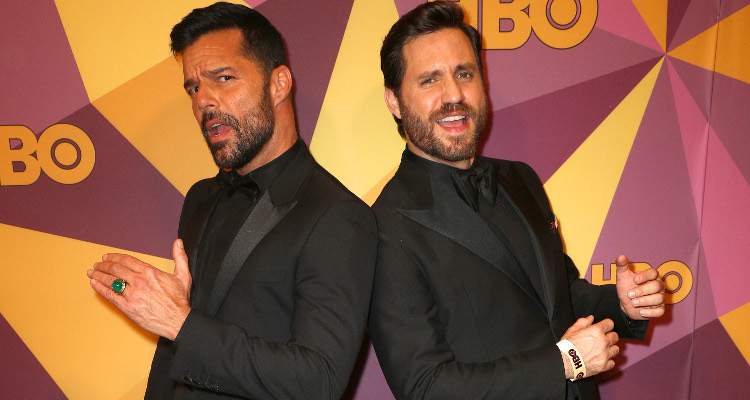 Ricky Martin hit the red carpet for The Assassination of Gianni Versace: American Crime Story and then stole the attention with his big revelation; Ricky Martin is a married man! While that sinks in, we’ve got all you need to about on Ricky Martin’s husband, Jwan Yosef!

Livin’ La Vida Loca, indeed! Ricky Martin had a big announcement on the red carpet for the American Crime Story premiere, looking so hot that it should be criminal! The sensational singer (who plays Gianni Versace’s boyfriend, Antonio D’Amico) revealed that he officially married his longtime boyfriend, Jwan Yosef. The funny thing is; they did it in secret! They plan to top their secret wedding ceremony with a grand three-day celebration soon and we can’t wait for the details! But just who is Jwan Yosef and how did the couple meet? We can’t pass this opportunity to gush about Ricky Martin and his new husband, so we put together a Jwan Yosef wiki just for you.

He’s an Artist of Plastic Arts

Yosef is a painter and artist of plastic arts. His work has been displayed in the exhibitions of other artists and he had two solo exhibitions in 2013 and 2015. In 2013, he won both the Threadneedle Prize and the BEERS Contemporary Award for Emerging Art. His choice of material has always been plastic and he’s rarely worked with paper.

Martin told Ellen DeGeneres on her show that even before the couple met, he long admired Yosef’s work. “He’s a conceptual artist, and I’m a collector. I started looking for art, and I saw his art, and I went crazy because I really love what he does, really original,” Martin explained to which DeGeneres quipped, “Then you collected him.” That he did and now the two are official! As for Jwan Yosef’s art, check out this interesting piece below!

He Has Multi-Ethnic Roots

Yosef was born in Syria, to a Kurdish family. His name means “gracious” in Hebrew. His family moved to Sweden where he studied painting in Stockholm’s Pernby School of Painting, between 2004 and 2006. In 2009, he completed his B.A. in Fine Arts from Konstfack University College of Arts, Crafts and Design in Stockholm. He later moved to London to acquire his Masters in Fine Arts from Central Saint Martins.

The 32-year-old is now based in London. He is one of the founding members and studio holders at The Bomb Factory Art Foundation in Archway, North London. The Foundation has 17 studios, two independent art groups, and over 30 resident artists.

About whether his ethnic background influenced his artwork, Yosef said, “It’s two very distinct and different cultures and I’ve never really felt I belong to any one more than the other. However, the mash-up or the in-between state of those two cultures is magical, almost schizophrenic.”

He is Inspired by Different Things

In an interview for his first solo exhibition, Yosef said that his motivation comes from the things he cannot get out of his mind. “Obsessions in general, I create the most when I’m genuinely consumed by something. It can be anything from neck to a feeling,” he said.

He loves going through Tumblr and looking for different images to use it as inspiration for his works. As major influences in Jwan Yosef’s art, he credits artists like Neo Rauch, Gerhard Richter, and Jaan Toomik.

Finding inspiration doesn’t seem to be too difficult for Yosef, who was always drawn to art. “I’ve always painted,” he explained adding, “It’s always come naturally to me. It was an obvious step for me from an early age. However, it is not just something you become overnight but more so evolve and work yourself into over time.”

The 33-year-old claimed that he’s fallen in love many times. But there’s another love he has—and that’s food! His favorite thing to do in London is venture out into the city and find new restaurants to try out.

Yosef prefers toast and eggs for breakfast and he likes his meat “super raw.” At least we know what Ricky will be making for breakfast in bed for his hubby!

What a stellar night with a stellar man ??‍♂️??‍♂️ @goldenglobes

A Love Story for the Books

Ricky Martin is a father to twin boys, Mateo Martin and Valentino Martin, born in 2008 by a surrogate mother. He was in an on-and-off relationship with Mexican TV host, Rebecca De Alba, but in 2010, he publicly announced that he’s gay. He dated Carlos Gonzalez Abella, an economist, for three years before ending their relationship in 2014.

Martin and Yosef began dating in 2016. They officially went public with their relationship in April that same year, when the couple hit the red carpet in Sao Paulo, Brazil at amfAR, the foundation for AIDS Research event. Martin said that Yosef and his sons get along really well.

Martin revealed on The Ellen DeGeneres Show that they were engaged. He confessed he was very nervous when he proposed to Yosef. “I got on my knees, and I took out the little velvet pouch and instead of saying, ‘Would you marry me?’ I said, ‘I got you something!’ Bad,” explained Martin. But Martin continued despite the embarrassment and Yosef said yes.

And now they are married! He dished about his new relationship status at the premiere of the new season of ACS. “We exchanged vows, and we’ve swear [sic] everything, and we’ve signed all the papers that we needed to sign, prenups and everything,” Martin said, adding that they plan to have a “heavy party” for three days in a couple of months to celebrate!

This is us in our home??‍♂️??‍♂️ @archdigest had a look inside our most personal abode. Woop woop ?? #architecturaldigest #covergirl