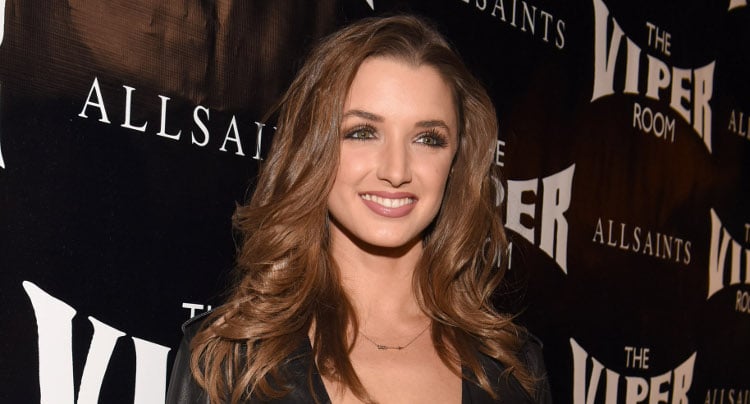 Alyssa Arce is a model that has been featured in magazines, and was also Playmate. But, she’s most famous for being photographed with Justin Bieber on his private yacht!

Alyssa Arce has no qualms showing off her gorgeous body. She was a Playmate back in 2013, and has bared everything in her portfolio. Her Instagram page is full of bold topless photographs. Arce’s latest post is a dark and sexy picture taken by photographer, Monica Baddar. In the picture, Arce sporting a black shimmery blouse and nothing else.

If you take a glance at the 24-year-old’s Instagram page, you will find it littered with numerous posts of Arce baring her body and pushing the envelope in pictorials. The woman definitely isn’t shy about showing off her tanned and toned body! The up-and-coming model even takes a stand against censorship. When people reported her posts and had them taken down from Instagram, she posted another picture captioned, “To all the haters out there that got not just 1 of my photos deleted but 2. Go do something better with yourself than report my photos. Thank you and go f&$k yourself!”

Arce is mostly famous for two reasons. One is being a Playmate, and the other is for being photographed making out with Justin Bieber on his private yacht. This was back in 2014, when Bieber was caught kissing and snuggling with a gorgeous woman on his yacht at Ibiza.

While speculations of whether or not Bieber was dating the model rose, the “Baby” crooner was seen hanging out with his close pal, Kendall Jenner soon after his yacht party. Bieber shared a picture on his Instagram (before deleting his account) of Jenner leaning in for a kiss, two days after he was seen with Arce.

At the time she was photographed with Bieber, Arce was seen with what was assumed to be an engagement ring! But reports confirmed that she didn’t have a fiancé, and was therefore was single when she posted the photo with Bieber. The relationship rumors between Arce and Bieber took a backseat as Bieber’s picture with Kendall Jenner sparked a whole other Justin Bieber and Selena Gomez drama.