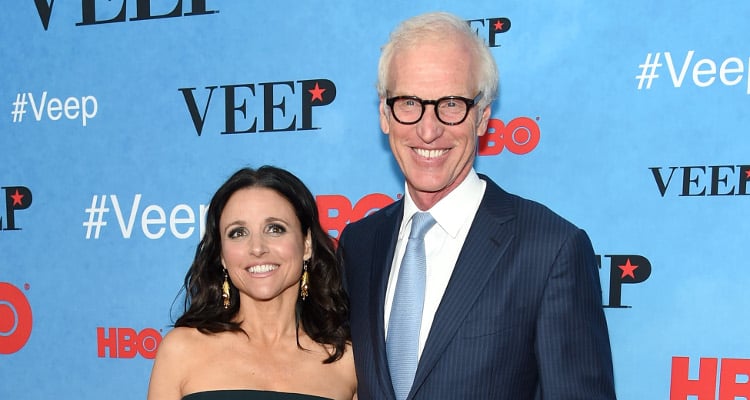 Julia Louis-Dreyfus took to social media to reveal that she was diagnosed with breast cancer. She is keeping her spirits up and fighting the disease with the support of her family and friends. Her husband is surely supporting her in her battle.

Julia Louis-Dreyfus and Brad Hall have a longstanding marriage. Keep reading to find out more about the Veep actress’ husband.

Who Is Brad Hall?

Like his multi-talented wife, William Brad Hall is an actor, writer, comedian, and director. Born in Santa Barbara, he was once an avid surfer. He even said he learned to surf as soon as he could walk.

He attended Northwestern University where he met a young woman with a wealthy background and knack for comedy. This woman, Julia Louis-Dreyfus, would become his wife in 1987. And they celebrated 30 years of marital bliss this June with throwback pictures on Instagram.

Her wedding photos, especially her puffy-sleeved wedding dress, and cute captions gave her Instagram followers a few chuckles. Louis-Dreyfus said the secret to her long and happy marriage was simple—she “found the right guy.”

The Couple Who Laughs Together Stays Together

Hall and Louis-Dreyfus met when she joined The Practical Theater Company, which Hall started. Together, they performed on Saturday Night Life from 1982 to 1984. They also guest-starred in two episodes of Curb Your Enthusiasm.

In SNL, Hall played various funny characters for almost 40 episodes. He wrote and starred in the movie, Bye Bye Love and worked in movies like The Guardian, Troll, Limit Up, and A Bug’s Life. His most recent acting credit was on an episode of  Brooklyn Nine-Nine.

Hall worked as writer, producer, and director on the TV show, Brooklyn Bridge. He also wrote an episode of  Frasier and American Dreamer. His biggest credit is creating, writing, and executive producing the Jonathan Silverman sitcom, The Single Guy. He has also directed an episode of his wife’s latest HBO comedy, Veep.

The 59-year-old has earned an estimated net worth of $10.0 million in his career. Not a small sum by any means but still a lot less than Louis-Dreyfus’ net worth of $200.0 million.

Louis-Dreyfus and Hall are parents to Henry and Charles, born in 1992 and 1997 respectively.

Henry chose not to follow his parents’ comedic footsteps and pursued a career in music instead. Introduced to music because of his parents’ love for it, he began playing the guitar and writing songs at the age of 10. When he was older, he moved to New York where he performed with his band, Grand Cousin. Last year, he released a new song “Frenemy (Just Be Nice),” which was inspired by the “frenemies” in his own life.

Their younger son, Charlie, attended Northwestern University where he played basketball with the Wildcats as a walk-on for the team. His parents popped up on arena screens when the Wildcats were playing in the NCAA tournament this year.

30 years ago today this happened. So far so good.