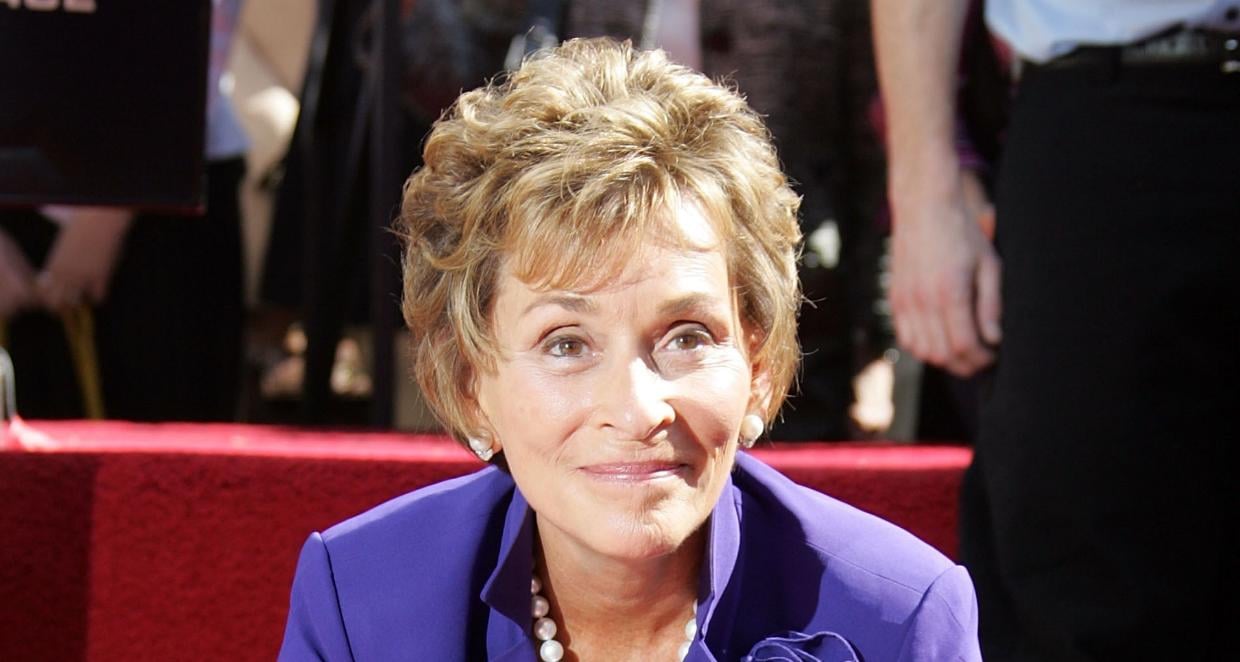 Judge Judy receives her star on the Hollywood Walk of Fame in 2006. Credits:GettyImages/FrazerHarrison

Judith Sheindlin, more famously known as Judge Judy, is an inspiration to many people. Because of her determination, hard work, and no-nonsense attitude, Judge Judy’s estimated net worth is $350.0 million. But how much does Judge Judy make a year? Here’s how she is minting money.

Judge Judy is an American family court judge and television star known for the show, Judge Judy. She was an attorney for almost 31 years and became a judge in 1982.

At first, Sheindlin presided as a judge in criminal court. Later on, she became a judge at Manhattan’s supervising family court in 1986.

Her hefty net worth is due to her long career in the law industry. Additionally, Sheindlin is a television personality known for her hit court show, Judge Judy. The show has been one of the most entertaining reality court shows for more than 15 years now.

Sheindlin is also one of the highest paid entertainers in the industry. She is known for her no-nonsense attitude and style of judging.

It’s infectious to watch her hand out settlements of disputes while she gets to the bottom of the story and dissects the problems. She often gives her own pieces of tough-love and advice to the parties involved, which has made her so popular on screen.

Phrases like “Baloney!” and “Do I have ‘stupid’ written on my forehead?” have made viewers tune in to catch all her courtroom drama. And there have been several times where she’s even threatened to throw people out of her courtroom! Quite frankly, there’s never been a judge like her!

She was born Judith Susan Blum on October 21, 1942, in the Brooklyn borough of New York City. After graduating from James Madison High School, she attended American University in 1963 and graduated with a Bachelor of Arts degree, majoring in government. Then, in 1965, she earned her Juris Doctor degree from New York Law School.

Currently, Judge Judy is married to Judge Jerry Sheindlin, who was an arbitrator on The People’s Court from 1999 to 2001. She has two kids named Jamie and Adam from her first marriage and three stepkids with Jerry Sheindlin named Gregory, Jonathan, and Nicole.

Judge Judy’s Earnings Over the Years

Taking advantage of her fame, Sheindlin started a game show called as iWitness in 2017, which aired on July 10 and went on for six weeks.

She has also made money by penning down her thoughts! She has written seven books:

Besides writing books, Sheindlin also handles her website, www.whatwouldjudysay.com. She touches upon various topics related to romance, prenups, stepchildren, and more. She also posts vlogs and advertises her books on there, too.

Along with her daughter, Nicole, Sheindlin is the director and creator of the program, “Her Honor Mentoring Program.” The main aim of the project is to help young women to reach their full potential and achieve their dreams in the workplace and everyday life.

They started the program in 2006 when the two of them partnered with the Westchester County Office for Women to provide administrative support for their program. They have since helped hundreds of women and expanded to high schools throughout the region. They now have over 50 mentors helping out.

The Judge Judy courtroom series has earned Sheindlin several awards and honors. Her name was inducted on a star on the Hollywood Walk of Fame in February 2006.

Sheindlin was announced as No.13 on Forbes’ Top 20 Richest Women in Entertainment list in 2007.

In October 2012, she was inducted into Broadcasting & Cable’s Hall of Fame.

Sheindlin was awarded a Vice Presidency of the UCD Law Society in April 2013. Her program has been nominated several times.

Sheindlin was even granted a place in the Guinness World Records on September 14, 2015.

In 2017, Sheindlin was included on Forbes’ list of America’s Richest Female Entertainers.

Sheindlin surely knows how to live a lavish lifestyle! She has put her money to good use and invested in different homes in different locations. 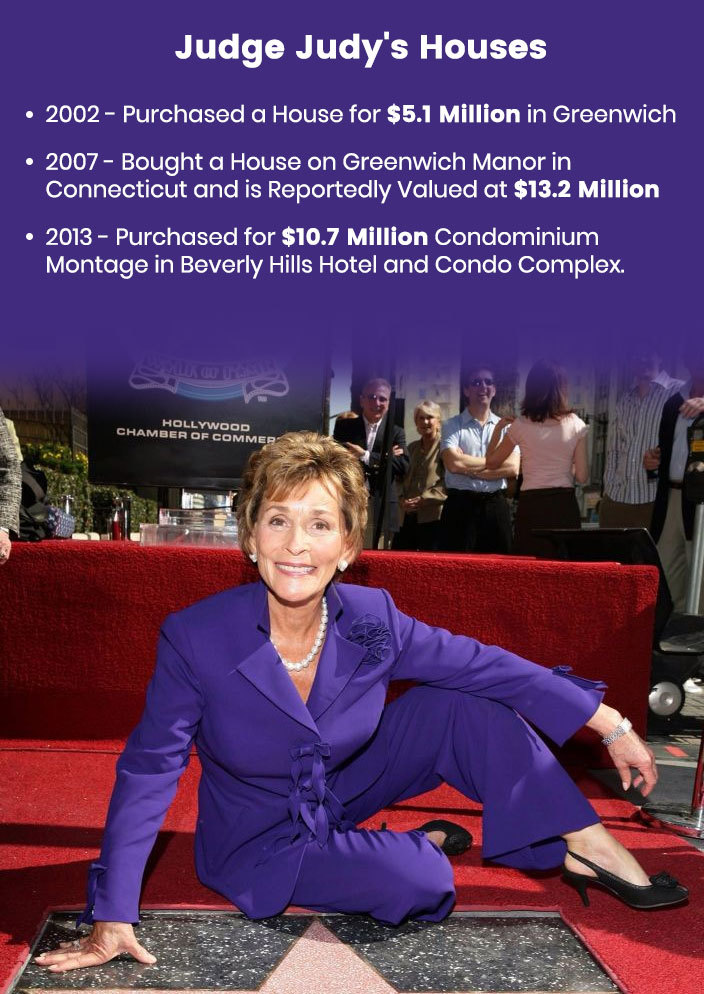 In May 2013, Sheindlin purchased a $10.7 million condominium Montage in a Beverly Hills hotel and condo complex. It is 4,680 square feet and has five bedrooms, three and a half bathrooms, four exposures, seven small balconies, and four parking spots in the underground garage.

Building amenities include a spa, a gym, a rooftop swimming pool, room and laundry service, a lobby, and a lounge area.

Sheindlin and her husband bought a house on Greenwich Manor in Connecticut in 2007. The huge house is reportedly valued at $13.2 million and sits on just over 12 acres. It has nine bedrooms and eight and a half bathrooms.

They also have a second home in Greenwich that was purchased for $5.1 million in mid-2002.

Her Condo in Naples, Florida

Sheindlin also had a condo in Naples, Florida, which was put up for sale in 2015. The price of the house was listed as $11.0 million.

It was 8,550 square feet and had four bedrooms, as well as four full and two half bathrooms. The Sheindlins reportedly bought the house in July 2005 for $6.9 million.

They also had a two-bedroom and two-and-a-half bathroom pied-a-terre on the 11th floor of the Sherry-Netherland on New York City’s Fifth Avenue. It was listed for $9.0 million but was sold for $8.5 million.

Judge Judy had a yacht that was called “Triumphant Lady.” It was reportedly 152 feet long, has five cabins, and could accommodate up to 14 guests. 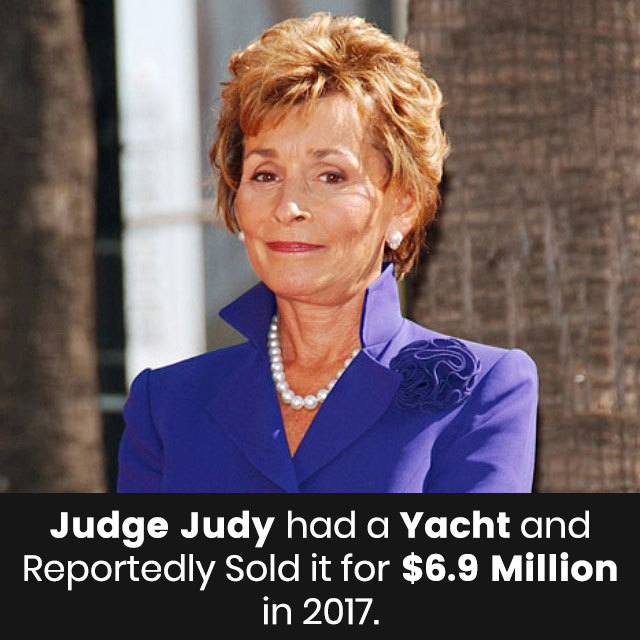 Judge Judy had a yacht and reportedly sold it for $6.9 million in 2017. Credit:Instagram/judy_sheindlin

Besides being the owner of several homes, Judge Judy also has her own private jet! She frequently flies to different places for shooting her TV show and to look after her houses, perhaps.

Currently, Sheindlin is busy shooting Jude Judy and has no plans to retire as of now. She claims that she will do the show until the time her audience doesn’t get bored.