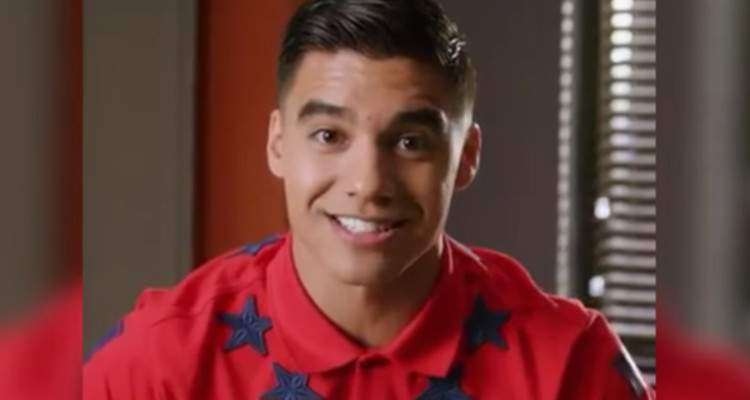 Grown-ish premiered last night and fans are already loving it! The show is a spin-off of the popular Black-ish sitcom, which centers around the Johnson family. Grown-ish follows their eldest daughter, Zoey and her adventures in college. If you’ve noticed one of Zoey’s good-looking classmates, Vivek Shah, you’re not alone! Keep reading to find out more about Vivek from Grown-ish.

Black-ish fans, get ready for some more laughs from the Johnson clan! Grown-ish revolves around Zoey Johnson’s college life and all the people she meets there.

One of her friends is Vivek Shah, played by the fresh-faced Jordan Buhat. Everyone is curious to know more about this young actor, and we have everything you need to know in our Jordan Buhat wiki.

He is from Alberta

Jordan Buhat is from Edmonton, Alberta. His dad was a bodybuilding champion, and his mom was a soccer player. Buhat pursued his education at the University of Alberta.

He auditioned for Big Brother Canada in 2013, where he revealed that he learned a lot as a summer camp counsellor for kids. Unfortunately, he did not make the cut.

The actor also revealed that he was 10 years old when he found out that he was not raised by his biological mother. He said that instead of feeling miserable, he decided to push forward. “I told myself to keep striving towards my goals and my dreams. And one day I’ll say, ‘Hey, I’m just fine. You’re missing out,’” he explained.

His Love for Fitness

Take one look at Jordan Buhat’s Instagram, and you’ll see that the actor is almost always at the gym! A lot of his posts center around his fitness routines that are sure to make gym junkies green with envy!

Takes a certain kind of person to work on things that you’re not good at every single day. Today was hard haha. And everyday is. But we do the things today that others won’t, so tomorrow we can do things others can’t. Bettering yourself every moment of everyday 🙂 Also got my Team Canada 2017 Crossfit Invitational shirt in the mail today ❤️ @reebokfitnes #chasingexcellence @benbergeron #canada #canadian

A caption on one of his photos reads, “What people don’t see is that behind every talented person who has become a massive success is a daily schedule of grind, hours of suck, and a whole string of difficult, lonely moments of working on tiny details that will get them where they want to go.”

“What people don’t see is that behind every talented person who has become a massive success is a daily schedule of grind, hours of suck, and a whole string of difficult, lonely moments of working on tiny details that will get them where they want to go.” – @benbergeron #chasingexcellence

His Instagram account currently has a little under 7K followers, but we’re sure this number will rise as more people see Jordan Buhat on Grown-ish! He’s already becoming a fan favorite!

His Role on Grown-ish

On the show, he plays Vivek, a first-generation Indian-American freshman at Southern California University. He is the classmate of Zoey Johnson, played by Yara Shahidi. She meets a good majority of her new friends, including Vivek, during a midnight class. Vivek was described as someone with an “endearing lack of self-awareness.”

Last night’s episode showed that Buhat is truly a star in the making. He may only have a supporting role on the show for now, but he is winning fans all across America!

Jordan Buhat may not have made it on Big Brother Canada, but life clearly had bigger plans for him. His charming good looks and personality on Grown-ish are sure to make him a star in the industry and we can’t wait to see what’s in store for him next!