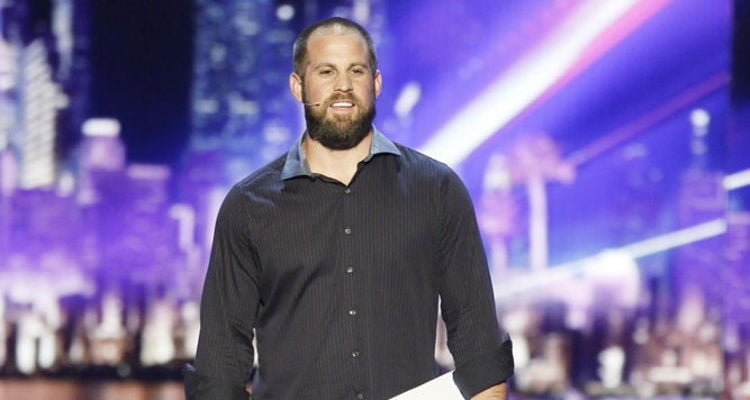 America’s Got Talent is nearing the end as the semi-finals round finished on Tuesday, and if you forgot to watch, then you missed out on some brilliant performances! One of the contestants who performed in the semi-finals is ex-NFLer, Jon Dorenbos. The 36-year-old surprised the judges and viewers with another jaw-dropping magic act.

Jon Dorenbos’ act on America’s Got Talent enthralled everybody with card tricks, but, with time his tricks got more complex and intricate. On Tuesday night, Jon came up with another intricate magic trick. This time, he asked all the judges to throw velcro footballs onto a giant map. Then the trick was followed by a locked wooden chest, quarters and a lot of moving parts. It was all very interesting and amazing when he ended his trick, leaving all four judges (especially Simon Cowell) in shock. After reading about his amazing magic tricks, we are sure you would want to know more about Jon Dorenbos, so let’s take a look at his facts.

He was born as Jonathan Paul Dorenbos on July 21, 1980 in Woodinville, Washington. Jon had a very difficult childhood. In the year 1992, when Jon was 12-years-old, his mother, Kathy was killed by his father, Alan, who was a software specialist. Following the incident, his father was arrested and charged with second degree murder. He was sentenced to 13 years and 8 months in prison.

After his mother’s death, Jon was sent to a foster home and following a long legal battle, he was finally adopted by his aunt and uncle, Susan and Steve Hindman. Jon started doing magic tricks to overcome all of this.

Jon went to Pacifica High School in Garden Grove, California and he was a letterman in football, hockey, basketball, and baseball. Due to his hard work and efforts, he got an all-league honors in football and baseball. He even made it to the Dean’s list and was an honor roll student. He attended the Golden West College in Huntington Beach in California.

He is an American football long snapper for the Philadelphia Eagles of the National Football League. He signed a contract with the Buffalo Bills as an undrafted free agent in the year 2003. Apart from Philadelphia Eagles, he has also played for the Tennessee Titans.

Apart from being a footballer, he is also a professional magician and has performed in several cities like Las Vegas and Hollywood. He is one of the contestants in season 11 of America’s Got Talent. In the judge-cut round he got the golden buzzer from Ne-Yo and immediately qualified for the next round. He gave an amazing card performance during the semi-finals and will be performing in the finals on September 1, 2016.

I couldn’t be happier than to spend my life with this smile. This smile starts my day. I love you @missannalisedale #happy #love #eagles #philly

Jon Dorenbos’s net worth is estimated to be $2,473,500, and like all the other players, he also gets paid for endorsements, ads, and sponsorships. He also earns a good amount of money from performing live shows for celebrities. Stay tuned for his next performance in the finals of America’s Got Talent on September 1st!