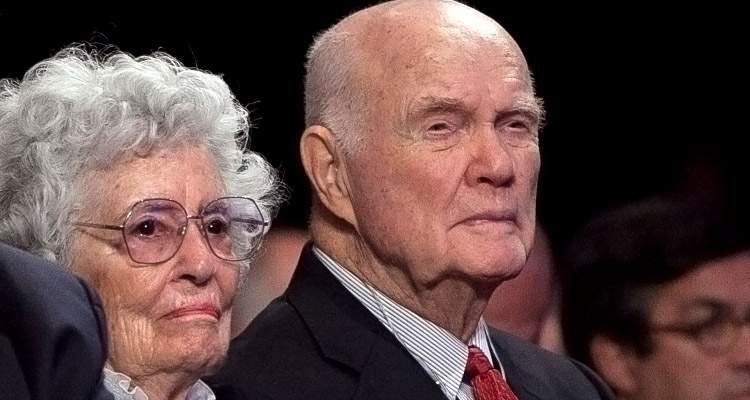 Tomorrow will mark the anniversary of the death of former astronaut John Glenn, and his wife, Annie Glenn, will be back in the spotlight. She is a strong woman who was married to the former senator for more than 73 years before he died in 2016. Although she is now 97 years old, it seems there is nothing that can stop her! Keep reading to know more about this inspirational woman, right here in our Annie Glenn wiki.

John Glenn’s wife had a stuttering problem throughout her life until she was 53. She overcame the speech impairment, and today, she can talk like any other person. John Glenn had cried when he heard her talk for the first time, and Annie Glenn considered the experience “unreal.” Check out these amazing and interesting facts about her.

Born as Anna Margaret Castor on February 17, 1920, in Columbus, Ohio, Annie Glenn’s age is 97. Her father was a dentist, and the family moved to New Concord in the same state, when she was three. That was when she met the love of her life, John Glenn, and the two became childhood friends.

The duo grew up together and were high school sweethearts, too. Annie Glenn attended Muskingum College after high school. She studied music and education, graduating from the college in 1942.

Glenn declined a pipe organ scholarship that was offered to her by the Julliard School of Music, as she chose to stay put in Ohio to be with her sweetheart. The next year, in 1943, the couple tied the knot, and have been married ever since.

John Glenn had an amazing life as a pilot, astronaut (including being the oldest human ever in orbit), and senator but he also had a lovely relationship with his wife of 73 years Annie, who he had known since junior high school. After their wedding, when he was shipping out to go to war in WWII, choked up and lost for farewell words that would convey his feelings, he told her he was 'just going round to the cornershop for a pack of gum'. He would go on to tell her this before every dangerous mission and her answer was always, 'don't be long'. #relationshipgoals #allthefeels #astronaut #ripjohnglenn #johnglenn #space #nasa #history #mercuryseven #therightstuff #mercuryproject #annieglenn #guinessbookofworldrecords

He Loved Her to the Moon and Back

John Glenn was the first American to orbit the Earth and return safely in 1962. He was a celebrated person all his life, and he loved the attention! But the same couldn’t be said about Annie though.

Annie Glenn was battling problems of her own down on Earth, while her husband was up in space. She had a speech impairment all her life, and she would stutter.

Glenn was diagnosed with 85% stutter, which meant that she couldn’t speak 85% of the words she wanted to, making it very hard for her lead a daily life. So, she chose to stay away from all the limelight that her husband was getting. But, he was more concerned about her comfort, and he never compromised her privacy.

John Glenn was also a Marine. Before rocketing off into orbit on the Friendship 7 shuttle, Glenn had flown 149 combat missions in World War II and the Korean War.

It was a hard time for his wife, but John Glenn would keep her hopeful before any of his flights by saying, “I’m just going down to the corner store to get a pack of gum.”

In response, Annie Glenn would say, “Don’t be long.”

She Overcame Her Disability

This strong bond is what kept the two of them coming back to each other, but Annie Glenn was still struggling with her speech. It was when she was in her 50s that Glenn decided she wanted to do something about her disability.

Glenn heard about a three-week intensive program on The Today Show back in 1973, and they spoke about Roanoke. So, she decided to take up the program but she wasn’t allowed to talk to or contact any family member during the course. And, what happened at the end of the program was a miracle.

“When I called John, he cried,” Annie said. “People just couldn’t believe that I could really talk.”

#johnglenn and #annieglenn sitting at the end of the #canal in #timbercove just a few houses down from ours.

Glenn overcame her disability. She could call a taxi, go shopping, ask for the correct things, and was even be able to communicate smoothly!

The first thing she told John Glenn when she saw him back home was, “John, I’ve wanted to tell you this for years. Pick up your socks.”

It was a happy time for the couple, and things were looking positive. By this time, Annie Glenn’s kids were already grown up and had their own lives. Her son, John David Glenn was 28, and her daughter, Carolyn Ann Glenn, was 26.

At the age of 53, Annie Glenn found herself liberated. She began giving speeches while her husband ran for senatorship in Ohio. Glenn began to see the world differently and was no longer ignored or made fun of for her disability.

In his book about the Mercury Seven astronauts, “The Right Stuff,” Tom Wolfe wrote: Astronaut John Glenn had just sat for five hours in the Friendship 7 capsule, but the mission was eventually scrapped due to the weather. Meanwhile, his wife Annie sat in their home with Vice President Lyndon Johnson sitting outside and, in Wolfe’s words, hoping to “pour ten minutes of hideous Texas soul all over her on nationwide TV.” Annie stuttered this to John over the phone, as he prepared to climb out of his spacesuit. She didn’t want the media attention, not with her stutter. "Look, if you don’t want the vice president or the TV networks or anybody else to come into the house, then that’s it as far as I’m concerned,” John told her. “They are not coming in and I will back you up all the way and you tell them that! I don’t want Johnson or any of the rest of them to put so much as one toe inside our house!” Annie said, "As the wife of a famous astronaut, I had to deal with being constantly in the public eye. I had to deal with the press. And if this wasn’t hard enough, I had to do it all with a severe handicap,” Annie told The Post. "Those were difficult times for me. In times of difficulty or defeat, it’s easy to think that we really have no choices. That we are trapped. I know I felt that way. Having tried, having failed so many times.” #johnglenn #annieglenn #hero #heroine #astronaut #nasa #paint #image #photographer #photograph #photoshoot #photooftheday #portrait #photo #love #igpoetry #poetry #poems #poetrycommunity #poetsofinstagram #poet #art #woman #time #fiction #writer #writers #writersofinstagram #desire #artwork

The Death of a Great Inspiration

John Glenn was 95 years old when he passed away on December 8, 2016, and the couple had celebrated their 73rd wedding anniversary that year. Annie Glenn was all over the news, after all, she was the wife of a very well-respected man in America.

It was softly raining on December 8, 2016, during John Glenn’s funeral service. And as the Marines carried his plastic covered casket, Annie Glenn sat by and watched her husband for the last time. A Marine then later gave her the folded flag, and as a thanks, she gave him a kiss on the cheek.

It was a sad day in America, and John Glenn now rests in Arlington National Cemetery. It was a beautiful goodbye to a great Senator, a brave war hero, and an inspirational astronaut.

??? The flag-draped casket of John Glenn, the first American to orbit the Earth, was covered in plastic to protect it from a steady rain as it was carried on a horse-drawn caisson to his final resting place at Arlington National Cemetery. Later, his widow, Annie, gave a kiss on the cheek to the Marine who presented her with the folded-up flag. Glenn, who died Dec. 8 at age 95, was laid to rest Thursday in a private burial at Arlington attended by relatives and invited guests. His family scheduled the service for what would have been John and Annie Glenn's 74th wedding anniversary. ?: @AP.Images #JohnGlenn #AnnieGlenn #Arlington #ArlingtonNationalCemetary #Astronaut #Space #funeral #funeralservice #RIP

Annie Glenn is now working with the disabled and has received multiple accolades for her work. She has been involved with several organizations like the Columbus Speech & Hearing Center, the National Center for Survivors of Childhood Abuse, the National Deafness and Other Communication Disorders Advisory Council of the National Institutes of Health, and has even been on the board of the Muskingum College as a trustee.

The Annie Glenn Award is named after this inspiring woman. And, she had the honor of presenting the first one to James Earl Jones in 1987.

There have been many TV shows and movies made on the lives of Annie Glenn and other women like her. But the most famous one was a TV show named The Astronaut Wives Club.

✨?somewhere in a private place she packs her bags for outer space and now she's waiting for the right kind of pilot to come and she'll say to him i would fly you to the moon and back if you'll be if you'll be my baby✨? – has anyone else been watching the new abc series the astronaut wives club? i've seriously been hooked/addicted to this show since i saw the very first commercial that aired about it which is like a rare first for me! this show is seriously out of this world (stupid pun….i know) and i can't highly recommend it enough! i really hope the abc network doesn't cancel this show and continues it on for as many seasons as possible!??#savagegarden #savagegardenlyrics #tothemoonandback #tv #tvshows #abc #abcnetwork #theastronautwivesclub #astronautwivesclub #newtvseries #bettygrissom #renecarpenter #louiseshepard #trudycooper #margeslayton #annieglenn #joschirra #hooked #addicted #mynewestaddiction #iloveitiloveit