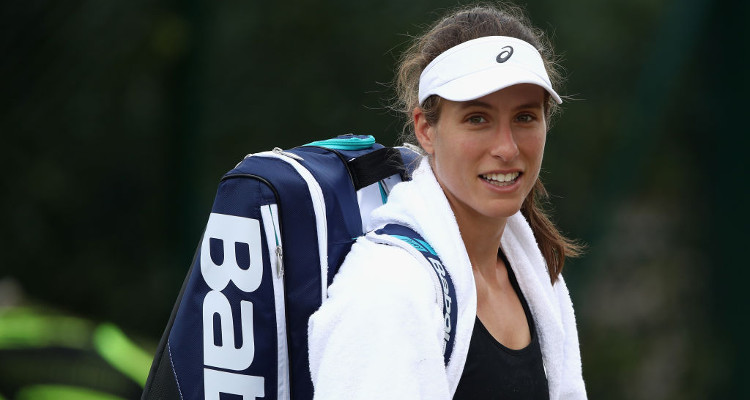 Johanna Konta was born in Australia, trained in Spain, plays for England, and is of Hungarian descent. This kind of multi-cultural background makes her a dangerous and interesting player. With a new coach and tons of confidence, Konta is carrying the expectations of a whole nation on her young shoulders.

She is the great British hope in women’s tennis. By reaching the Wimbledon 2017 semi-finals, Johanna Konta proved her supporters right and her detractors wrong about her ability to win in big tournaments. She now faces five-time Wimbledon champion, Venus Williams and has the whole country rooting for her. Konta is quite confident about her place in this tournament saying, “I’m much more process oriented, so I don’t give myself too much time to dream. I’m more focused on the work.” The Venus Williams vs. Johanna Konta face-off will be among the most watched matches at this year’s Wimbledon tournament. After all, every British person would love to read a headline naming Johanna Konta as the Wimbledon 2017 champion! Check out more details about her in our Johanna Konta wiki.

Born on May 17, 1991 in Sydney, Australia to Gabriella and Gabor Konta, Johanna Konta’s age is 26. Her parents are Hungarian and met in Australia. Konta was eight years old when she got her first tennis lesson in an after-school program. She went to a tennis academy in Barcelona, Spain to improve her game when she was in her early teens. During this time, her parents emigrated to England and settled down in Eastbourne, East Sussex. Konta became a British citizen in May 2012 and now represents England as a full-time professional tennis player.

Moving Up the Rankings

Konta started her career by winning small tournaments for little to moderate prize money. She continued to practice hard and hone her skills and soon started giving the top-seeded players a run for their money. She then started to perform better in Grand Slam tournaments, and her ranking improved. Johanna Konta’s ranking is currently No. 6 in the world, and it is also her highest ranking so far. It augurs very well for Konta as she carries the expectations of a whole country who have been starved of a champion woman’s player for the last few decades. Johanna Konta’s coach is currently Wim Fissette, a Belgian former professional tennis player who has already coached some of the top seeded female tennis players like Victoria Azarenka and Kim Clijsters.

All Eyes on Konta

Konta specializes in offensive baseline play but has an amazing all-round game, as well. Her serve is considered to be among the best, and is her biggest weapon. Her movement and footwork have improved in the last few years, and that explains the upsurge in her rankings. Venus Williams vs. Johanna Konta’s match is probably the most eagerly awaited women’s match in the tournament, so far. Fans are anxious and expectations are high, and the match has drawn the attention of former greats like Virginia Wade. “I think Jo should win that match. I don’t think Venus will choke, so I think that Konta will have to win the match, but I think it’s absolutely on the cards,” said Wade in an interview.

Hopes of a Nation

Fans looking for pics of Konta should check out her social media accounts. Johanna Konta’s Instagram account has pictures of her in pretty, colorful dresses, and on the court, with her trophies, friends, and fellow players. Though she had some troubles with coaching in the past, things seem steady with Fissette as her new coach. Carrying the hopes of a nation is enough to unnerve anyone, but Konta is up to the challenge. Wimbledon 2017 could be an iconic tournament for the player!