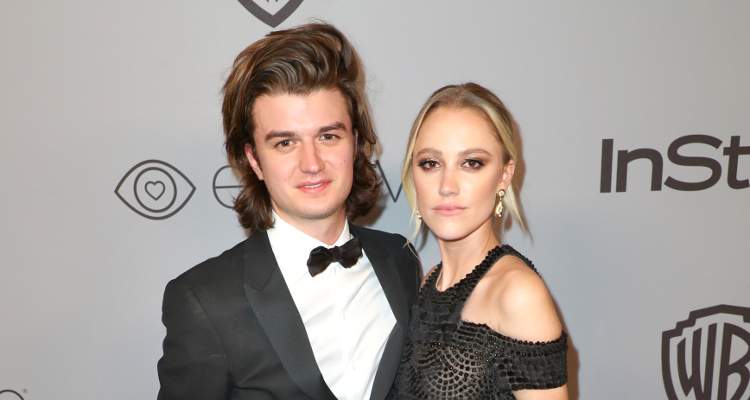 The 75th Golden Globes not only gave actors recognition for their work, but it also gave people new hope as the Time’s Up movement had both men and women in Hollywood wear black to end sexual harassment in the workplace. One couple who shined were Joe Keery and his girlfriend Maika Monroe.

Maika Monroe is not just your regular girlfriend—she’s a super girl! The 24-year-old is a professional kiteboarder who lived in the Dominican Republic.

We have some amazing facts about Joe Keery’s girlfriend in our Maika Monroe wiki, so keep reading to know more about her.

Born on May 29, 1993, Maika Monroe’s age is 24. She’s a true blue California girl and was raised in Santa Barbara. Her birth name is Dillon, but the actress changed it to Maika.

At the age of 13, she began kiteboarding, which she learned from her father who was a pro kiteboarder. Although he was against it for a while, as the sport is considered to be dangerous, he agreed to teach Monroe after she begged him.

Maika Monroe was 17 when she left home and moved to the Dominican Republic. Her passion for kiteboarding took her to the sunny country where she trained to surf and kite with some pros.

She became attached to the country and didn’t return to California to graduate high school. Instead, she completed her senior year of high school online.

Children in the Dominican Republic inspired Monroe while was kiteboarding, so she dabbled in fashion and launched her own clothing line in the picturesque city of Cabarete for a good cause. All the proceeds went to charity.

Monroe has been acting since she was 19, and her first project was Labor Day. She signed on to play Mandy, a farm girl who falls in love with a young man.

In 2013, she landed a role in the psychological thriller, The Guest. This was followed by the horror movie It Follows, which gave the actress her first hit and the title of a “scream queen.”

Maika Monroe’s movies include Independence Day: Resurgence, Bokeh, Hot Summer Nights, and I’m Not Here. She is currently filming The Widow, where she plays Erica.

According to sources, Maika Monroe’s net worth is estimated at $1.0 million. But that figure is sure to rise as she’s got a bright future ahead of her.

Maika Monroe and Stranger Things star Joe Keerey began dating in 2017, and the couple can’t keep their hands off each other! They were spotted in several locations, hand-in-hand and totally in love.

The couple are co-stars in the upcoming 2018 movie Shotgun, which is in post-production at the moment.

JOE KEERY AND MAIKA MONROE AT THE PREMIERE OF "THE TRIBES OF PALOS VERDES" MOVIE (17-11-2017) Joe Keery ( from TV series Stranger Things) went with actress Maika Monroe to the premiere of the movie " The Tribes of Palos Verdes" at The Theatre at Ace Hotel on November 17, 2017 in Los Angeles, California. Thanks to @gettyimages #joekeery #maikamonroe #noahschnapp #finnwolfhard #calebmclaughlin #gatenmatarazzo #milliebobbybrown #strangerthingsseason2 #strangerthings #theupsidedown #celebrity #model #fashion #tvshow #tvseries @uncle_jezzy @maikamonroe

Keery and Monroe are definitely giving us all couple goals. We can’t wait to see them take their love to the next level!

In 2015, Independence Day: Resurgence co-stars Liam Hemsworth and Maika Monroe were rumored to be seeing each other. Sources alleged that the couple showed some PDA off-screen.

Hemsworth was reportedly draped all over Monroe, with his hands on her backside. The couple even supposedly made out at a bar.

The rumors about Hemsworth and Monroe’s romance were never confirmed. He is now is happily engaged to Miley Cyrus. So, it’s a win-win for both!

The actress is quite active on social media. Check out these Maika Monroe hot pics from her Instagram:

Excited to be going to @sxsw with 'Hot Summer Nights'!! ??