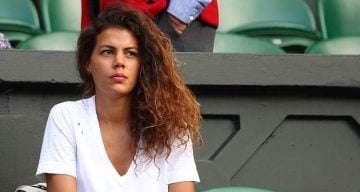 France’s Jo-Wilfried Tsonga is making waves at the Australian Open in Melbourne! The tennis star made a stunning comeback in the final set to win the match and reach the third round. No one was happier than Jo-Wilfried Tsonga’s girlfriend, Noura El Shwekh, who often accompanies Tsonga when he’s on tour. We have everything you need to know about her in our Noura El Shwekh wiki.

Jo-Wilfried Tsonga’s beautiful girlfriend, Noura El Shwekh, has been a huge part of the tennis star’s exciting journey. She has often been spotted cheering him on from the sidelines.

The couple became first-time parents in 2017. And with Tsonga’s great run in the Australian Open, things are looking up for the French tennis player, whose career has been plagued by recurring injuries.

So, who is Noura El Shwekh? Find out more about this lovely lady, right here!

Noura El Shwekh is from Switzerland and has been in a relationship with Jo-Wilfried Tsonga for over three years now.

Tsonga was previously in a relationship with Charlotte Deon, who was also often seen at his games. But when Deon did not attend Wimbledon in June 2014, rumors began to circulate that the two were no longer a couple.

In September that year, El Shwekh and Tsonga were first spotted together at the Davis Cup semi-finals in Paris. El Shwekh smiled for the cameras as she chatted with Tsonga, and the world was smitten by this beauty!

Since then, El Shwekh has accompanied her boyfriend whenever he’s on the road. At his matches, she is often seen sitting next to Jo-Wilfried Tsonga’s mother, Evelyn Tsonga.

Jo-Wilfried Tsonga is a private person and rarely shares much about his relationships on social media. He has posted only a few pictures of him and Noura El Shwekh on Instagram. But seriously, how adorable are they?!

Give Me Some Sugar!

In November 2016, Tsonga announced that the couple was expecting their first child together! Noura El Shwekh’s baby boy was born in March 2017.

Tsonga took a break from his tour schedule to be there with El Shwekh as she gave birth. He posted a delightful picture as he bonded with his newborn, and we love seeing the pictures of his journey as a new dad!

According to reports, Tsonga and El Shwekh named their son Sugar. The name seems to have been suggested by Tsonga’s dad, who is a fan of boxer Sugar Ray Leonard.

Well, can you think of a better name for a sweet little baby?

Fatherhood has been good for Tsonga and his performance improved in the latter half of 2017. After yesterday’s win, we hope to see more of Tsonga’s magic on the court!

Following his win against 18-year-old Denis Shapovalov, Tsonga said, “I’m tired but really happy. I did a big fight today, it’s not easy to play against these young guns — they go for everything.”

We know that El Shwekh will be cheering him on throughout the tournament.

Although 2017 was a great year for Jo-Wilfried Tsonga and Noura El Shwekh, we hope that 2018 will be even better for this lovely couple!