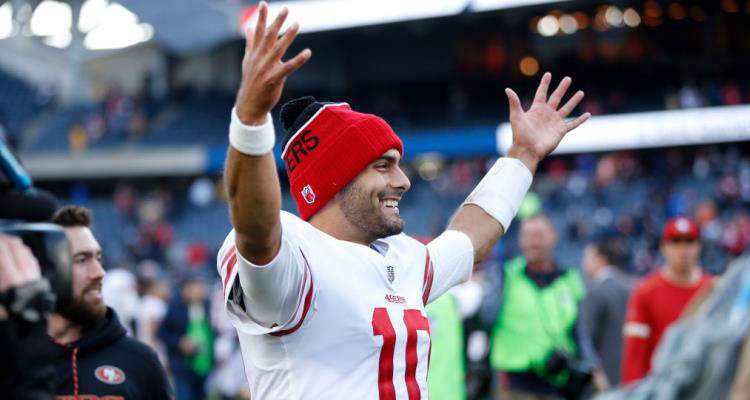 Football star Jimmy Garoppolo recently went public with his new girlfriend, after signing an incredible five-year deal with San Francisco. But just who is Jimmy Garoppolo’s girlfriend? Fans are growing more and more curious about the gorgeous brunette on the NFLer’s arm, especially since he’s about to be a hell of a lot richer!

The 49ers’ franchise quarterback recently celebrated his five-year $137.5 million deal with San Francisco, by taking his model girlfriend on a Valentine’s Day date! But who is the raven-haired beauty in the photo? According to reports, King is a Boston-based model and the couple has been together long before he was a member of the 49ers. Apparently, they have been dating since he was playing for the New England Patriots! (Way to stay under the radar!) A source also said the pair visited the Loews Hotel in Miami to enjoy their Valentine’s date. Want to know more about her? Keep reading our Alexandra King wiki to get the full scoop!

Since King’s Instagram profile is public, you can easily see plenty of her hot pics; it’s hard not to be lured in by her beautiful blue eyes and pouty lips! However, her online profile is not as dominant as more well-known models. But keep in mind, she already has over 20K followers on the platform and has only posted a few photos.

Facts about Her Boyfriend

Garoppolo is much more private than some of the other football players, keeping his personal life off social media. But his girlfriend posted a sweet photo of them, leading fans to believe their relationship is still going strong. However, the QB hasn’t written anything on the post, nor has he shared any posts of his model girlfriend on his own Instagram. A source claimed that Jimmy still has a “wandering eye,” adding that he likes to follow and message other ladies on Instagram, leading some to wonder if he’s keeping his options open. Or, perhaps he’s simply trying to be smart and keep the paparazzi at bay. Whatever the case is, the couple looked great on their Valentine’s date! Check out the two stunners together below!

History in the Making

His talent hit the roof when he upgraded from New England to the Bay Area, leading the Niners to five straight wins and earning his massive contract. He has now become the highest paid player in NFL history! At only 26, that’s a serious accomplishment to boast of.

His coach at Rolling Meadows High School had good things to say about him: “He hails from a great family. That’s what separates him from the wannabes and the average leaders. He’s had a stable and humbling family life.”

Garoppolo’s family still lives in Illinois. His father Tony is an electrician, and his mother Denise works as a cook. When he was first drafted for the NFL in 2014, his entire family made a trip to New York for the ceremony. (Girlfriends may come and go, so it’s great to know that he has the support of his family to back him!)

Since King isn’t a huge celebrity, she may remain a mysterious part of Garoppolo’s life for a while. Unless he posts something about her in the near future… only time will tell!