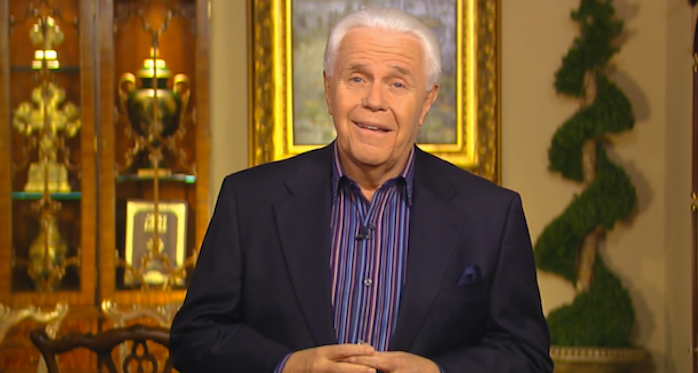 With an estimated net worth of $50.0 million, Televangelist and Minister Jesse Duplantis from New Orleans has asked his followers to fund a new Falcon 7X Jet because God told him he needed one! This now has many wondering, how much does Duplantis earn in a year?

Duplantis has over 34k followers on YouTube and millions otherwise. He has been preaching for over 40 years now, and has made a fortune by guiding people to the path of righteousness.

Duplantis, 68, is a multi-millionaire and has worked his way to the top from preaching sermons in the mid-70s.

The evangelist minister has made his fortune through books, TV, preaching, and his company called Jesse Duplantis Ministries.

Jesse Duplantis became a full-time evangelist in 1978. He has been preaching the way of the Lord since then, trying to reach out to as many people as possible.

Before becoming a minister, Duplantis, who was raised in New Orleans, Louisiana, was a rock and roll singer for a local band called Summer Wine.

He had long hair, took drugs of all kinds, drank more Whiskey than water, and said in an interview that he “took trips, and never left my house.”

When asked how he was saved, Duplantis said it was a “miracle.” His wife Cathy was a great deal of support for him, and he says it was through her, God made him realize the right path.

Here’s how much Jesse Duplantis is worth in estimation as compared to his contemporaries:

Duplantis has been writing books since the early ’90s, and has authored more than 50 books over the years. Some of his bestsellers like Wanting A God You Can Talk To, Living At The Top, and What in Hell Do You Want are also still selling on Amazon.

Through his books, it is reported that the evangelist earned an estimated $50,000 annually in online sales alone.

Duplantis’ books range from $3 to $70, and you can buy them online or off his official website. He has also released audiobooks and mini book sets, which are available online.

It can be estimated that Jesse Duplantis earns roughly $5,000 through his YouTube channel, Jesse Duplantis Ministries. He also has Christian Ministries and Christian Bible channels on the website, which have reportedly been earning him thousands every year.

Duplantis and his organization helped Hurricane Katrina victims through the Covenant Compassion Center, back in 2005. They provided hundreds of people with food, shelter, and clothing, and also provided financial aid to those were displaced.

Jesse Duplantis lives in a custom built 35,000 square ft. plantation-style mansion in Louisiana, which was constructed in 2009. The huge home cost an estimated $3.0 million to build and is worth roughly $6.0 million. The home is located on East Bank, and it is the largest home in the area.

According to the Herald-Guide, the home is plantation style, with more than 20,000 sq.ft. of living area, and an additional 12,000 sq.ft. of patio, garden, garage, yard etc.

This 25-room home comes complete with two double-door car garages, a games room, and a theater. The first floor itself has a two bedrooms, four and a half bathrooms, a breakfast room, a kitchen, a dining room and a music parlor.

The massive mansion was built by G&R Custom Homes.

Jesse Duplantis owns three private jets, and in recent news, he has asked his followers to donate $54.0 million to buy a brand new one; a Dassault Falcon 7X Jet. Why? So that he can do Lord’s work without stopping for fuel.

The other jets he owns need a pit stop to fill up, and Duplantis claims he “has been told by God” that he shouldn’t pay for it, but “bleed” for it, which means to ask the congregation to give the funds for the jet.

He then went ahead and urged his followers to raise the funds he needs to buy a shiny new plane which will help him preach in comfort.

Since then, people have questioned why pastors and evangelists need a private jet, when they can travel on a commercial plane like many others. Duplantis and fellow minister Kenneth Copeland believe that the commercial planes are “full of demons.”

The explanation given for only traveling by private jet is also because Duplantis had to “unbuckle his seat belt to speak to God.”

To which Copeland added, “You couldn’t have done that over an airline, stand up and say, ‘What did you say, Lord?”

Duplantis also explained his reasoning for the extravagant aircraft. “I really believe that if the Lord Jesus Christ was physically on the Earth today, he wouldn’t be riding a donkey,” he said, adding, “He’d be in an airplane flying all over the world.”

Televangelist Jesse Duplantis is hoping to take the word of Jesus to new heights with help of a $54 million private jet. @tonydokoupil has the story. https://t.co/V90d85CT1P pic.twitter.com/MW8WJM2VMD