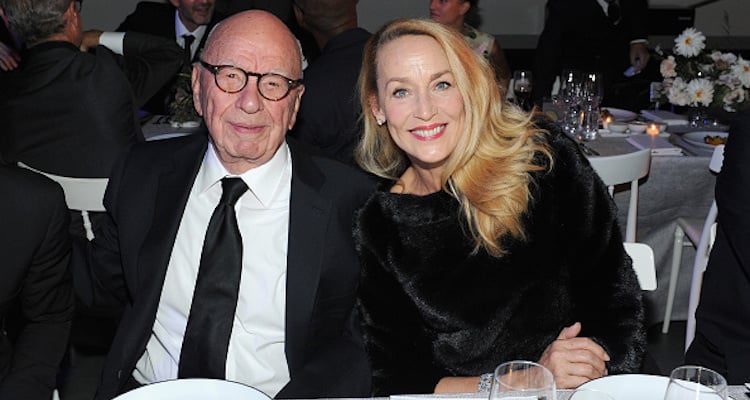 Depending on how old you are, the name Jerry Hall can mean different things. She’s a former model, an ex-rock and roll wife, and now, she’s married to one of the most powerful men in media! In this Jerry Hall wiki, we’ll examine the many roles she played, and how Jerry Hall made her net worth of approximately $15.0 million.

Before the Famous Suitors

Before she was Rupert Murdoch’s wife, and before she was Mick Jagger’s partner, Jerry Hall was the daughter of a truck driver named John and a medical librarian named Marjorie. She has three older sisters and a twin sister named Terry.

Born July 2, 1956, in Gonzales, Texas, Hall was born with what is considered by many as “all American” good looks. She is blonde, has blue-eyes, and is tall and leggy. It’s little wonder that she went into the world of modeling!

Using the money she made from a car accident settlement, Hall moved to France and was discovered on a beach by Claude Haddad, a noted fashion agent. Soon afterward, she ended up moving into an apartment with singer/actress, Grace Jones and future Oscar winner, Jessica Lange (who was also a model at the time).

Her modeling career took off not long after she began living with fashion illustrator, Antonio Lopez. Shortly after that, Hall’s connections to the world of rock and roll began when she appeared on the cover of Roxy Music’s Sirens. Within a few months, Lopez was out and Roxy Music singer, Bryan Ferry was in.

In 1977, Jerry Hall was young, beautiful, and on top of the world. She was collecting $1,000 per day for her modeling work and was dating the lead singer of Roxy Music. And then came Mick Jagger.

Jagger and Hall met at a dinner party and the two ended up making a connection, despite the fact that Jagger was still married to Bianca De Macias. Jagger and Hall began seeing one another and enjoying the New York nightlife. De Macias divorced Jagger in 1978 on the grounds of adultery.

The pair were never officially married despite having a private ceremony in Bali, Indonesia, in 1990. After the discovery that Jagger had an affair with model Luciana Morad, who was pregnant with his child, the singer finally called the relationship quits.

At first glance, Jerry Hall and Rupert Murdoch seem like an odd pairing. She’s a tall, former model from Texas that, even at the age of 61, is still stunning. He’s a media mogul who’s short, older, and has a reputation for using his influence and power to get what he wants.

The two were introduced by Murdoch’s niece in the summer of 2015, and were engaged the following year. By all reports, and despite the sheer amount of money involved with both parties, their relationship is rather old-fashioned. In fact, candid holiday photos show the couple playing Scrabble, which is apparently one of their favorite pastimes.

Jerry Hall today seems to be really happy and in a really good position in life. She’s married and every photo of her and Murdoch shows her smiling and laughing. Even without his money, Hall has an estimated net worth of $15.0 million, so she will always live comfortably. It’s good to be Jerry Hall!