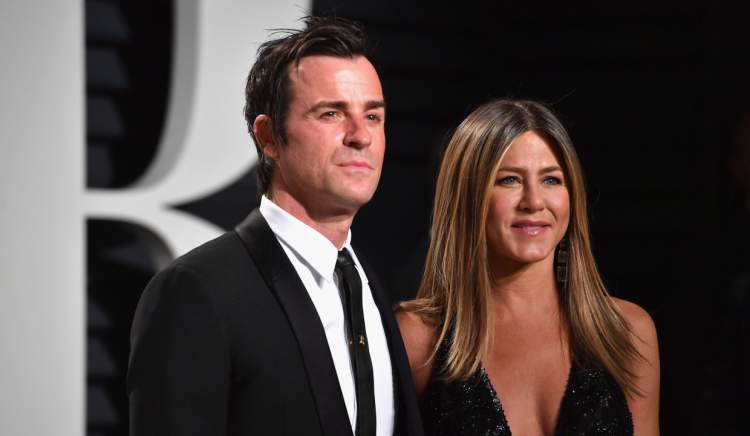 After just two years of marriage, Jennifer Aniston and Justin Theroux have decided to call it quits! The couple released a joint stating confirming their amicable breakup before the media had a field day, but there’s one question on everyone’s mind; Why did Jennifer Aniston and Justin Theroux split? Some believe the timing is perfect now that Brad Pitt and Angelina Jolie aren’t together, and are hopeful this original power couple will re-emerge. So, are Jennifer and Brad back together? Keep reading to find out!

Jennifer Aniston announced her divorce from Justin Theroux only moments ago, and fans are already speculating a Jennifer-Brad reconciliation! Her divorce comes at a time when both high-profile celebs are currently single.

There’s nothing fans love more than a good celebrity reconciliation! So, they can’t help but wonder if Aniston and Theroux’s divorce has anything to do with Pitt’s single status.

The rumors of “trouble in paradise” had been swirling for Justin Theroux and Jennifer Aniston for months now. They confirmed their split in a joint statement on Thursday, February 15.

“In an effort to reduce any further speculation, we have decided to announce our separation,” read the statement released by Aniston’s publicist, Stephen Huvane. “This decision was mutual and lovingly made at the end of last year. We are two best friends who have decided to part ways as a couple, but look forward to continuing our cherished friendship.”

The statement further referenced the gossip surrounding their split and said, “Whatever else is printed about us that is not directly from us, is someone else’s fictional narrative.”

The couple mutually separated at the end of 2017. But it doesn’t look like there’s any bad blood from either side. They even celebrated the New Year together at Cabo San Lucas in Mexico!

Theroux and Aniston met on the set of 2008’s Tropic Thunder. They began dating in 2011 after working together on Wanderlust. The couple were engaged in 2012 and married in 2015 in a surprise ceremony at the couple’s home.

Neither star stated the reason for their sudden split, but it’s believed that their busy schedules got in the way. They reportedly spent a lot of time apart in recent months.

Aniston recently celebrated her 49th birthday on February 11 —sans Theroux. She’s been spending time in Atlanta with Reese Witherspoon working on the new Apple TV series, Dumplin’. Theroux was filming The Spy Who Dumped Me in Budapest. He was also spotted in New York City, away from their Los Angeles residence.

Jennifer Aniston is really close to joining Ross on the 3 divorce team… pic.twitter.com/EMMj7IoLaR

Jennifer Aniston’s divorce announcement has caused quite a stir on the Internet. It didn’t take long for people to start rumors about a reconciliation between Aniston and Pitt.

Brad Pitt and Jennifer Aniston were once considered the golden couple in Hollywood. That is, until Angelina Jolie entered the picture. They went through a dramatic split in 2005, and fans dealt with the pain, too.

So Brad and Jen are totally getting back together, right? #exofmyexismyex pic.twitter.com/zRXo7HlFLc

Eager fans couldn’t help but notice that Pitt spent Valentine’s Day solo, and Aniston’s divorce news broke the next day. And now, everyone believes it is more than just a happy coincidence that the exes are single at the same time since their split almost 13 years ago.

Gossip outlets have concocted several stories about Aniston and Pitt apparently meeting over the weeks and exchanging presents. But those stories have been debunked by sources close to the beautiful actress and the reigning movie hunk. Sorry, hopeful gossipers!

I can't even decide if I want Brad sending Jen a "u up?" text

The Twitterverse has gone into a spin since Aniston’s divorce news. The jokes are hilarious, but hope for the golden couple to get back together is real. Even The Hills star, Spencer Pratt threw his single tweet into the mix!

Jen and Brad getting back together

Of course, it’s too soon to say anything. Going by her statement, Aniston would rather focus on her friendship with Theroux and her work.

We don’t suppose she will jump into another relationship fresh out of her divorce, and with an ex no less. But, we can still keep our fingers crossed for a Brad Pitt and Jennifer Aniston reunion, right?

Brad Pitt and Jennifer Aniston are getting back together. I called it first. #JenniferAniston pic.twitter.com/2BPeomEwbi