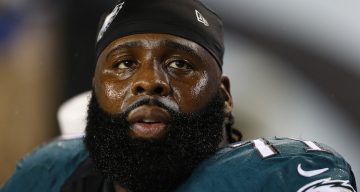 If you are a Philadelphia Eagles fan, you were dealt a harsh blow when Jason Peters was carted off the field in a stretcher the other night. But if you aren’t following the Eagles, you may be curious as to what the big deal is. In our Jason Peters wiki, we’ll take a brief look at offensive tackle. From his early years, to his contract with the Eagles, and even Jason Peters’ injury, we’ll cover all of the bases.

Jason Raynard Peters was born on January 22, 1982, in Queen City, Texas. He played for Queen City High School in not only football but basketball as well. Peters went on to the University of Arkansas to play for the Arkansas Razorbacks, starting off as a defensive tackle, moving to reserve defensive lineman, and then to the tight end spot.

A Slow Start to the NFL

Peters headed to the NFL with the 2004 draft where were decent expectations for him. Sports Illustrated predicted that he would be an early fourth round draft pick. Despite Jason Peters’ stats from his college career, he ended up going undrafted, eventually being picked up by the Buffalo Bills as a undrafted rookie free agent. On November 12, 2004, he signed on to the Bills’ active roster. From 2004 to 2008, he had some great seasons with the Bills, including doing well enough that the team signed Peters to a five-year, $15.0 million contract extension in 2006. By 2008, however, Peters was dissatisfied with the Bills organization and ended up being traded to the Eagles.

The Franchise Has Landed

The Eagles signed him to a six-year contract for $60.0 million. Jason Peters’ Eagles career (so far) has seen some high spots like being selected to the 2010 Pro Bowl and 2011 Pro Bowl as a starter. He was also selected for the 2010 second-team All-Pro.

The football player’s personal life is fairly quiet and he keeps things so tightly knit, there is no evidence that he is dating or that Jason Peters’ wife exists. His circle of friends and family is small, but mean the world to him. When he gets time off, he heads back to Queen City where he owns a home not too far from his mother’s. Depending on the weather, he’ll ride his bike from his home to his mother’s for a visit. He’s an amateur DJ, has a collection of cars that he restored, as well as a love for fishing. Taking his contract into account, Jason Peters’ salary and a few other things, Peters has a net worth of approximately $53.0 million.

Within the first part of the thrid quarter against the Washington Redskins, Washington defensive lineman Ziggy Hood collided into Peters’ leg, toppling the Eagles’ offensive tackle to the ground. Peters was then carted off the field on a stretcher, unable to leave under the power of his own two feet, holding the inside of his right knee. This could mean a number of things and  currently, the extent of the injury is unknown. But it is rumored that it is at least an MCL tear, if not both an MCL and ACL injury. Regardless, there is a very solid chance that Peters is out for the rest of the season. Given his age and possible rehab abilities, it’s not out of the question for him to return to the field, but it also could be a serious injury and Peters may call it a day.