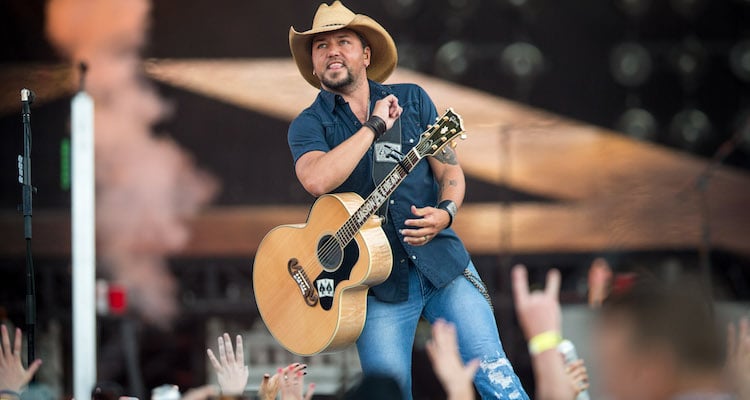 Jason Aldean has been enjoying a successful career as a country singer but unfortunately, the mass-shooting in Las Vegas during his concert has brought him to the forefront of a devastating tragedy. From Jason Aldean’s wife to his age, and the recent Jason Aldean concert shooting news, we’ll cover all the information you need in our Jason Aldean wiki.

Who Is Jason Aldean?

Born Jason Aldine Williams in Macon, Georgia in 1977, Jason Aldean’s age is 40. His parents divorced when he was three, and  Aldean lived with his mother, Debbie, for most of the year in Macon, and spent summers with his father, Barry, in Homestead, Florida. He took the stage name “Aldean” due to a suggestion from music consultant Monte C. Willis, who said there was already a Jason D. Williams performing in Nashville, and the similar names could cause confusion.

While Aldean moved to Nashville in November 1998, he wouldn’t get his big break until 2005 with the release of the Jason Aldean album and its first single, “Hicktown.” That first single would go on to reach No. 10 on the Billboard Hot Country Songs charts. That was followed by the No. 1 hit “Why?” and the No. 4 hit “Amarillo Sky.” This album was just the first of many successful ones for Aldean, including five No. 1 albums, and multiple awards, most recently being Entertainer of the Year by the Academy of Country Music two years in a row.

Jason Aldean’s life has not been without a little bit of controversy. He was first married to Jessica Ann Ussery on August 4, 2001. The two would go on to have two daughters: Keely (born February 14, 2003) and Kendyl (born August 20, 2007). In September 2012, Aldean would admit to behaving inappropriately with American Idol contestant, Brittany Kerr. The marriage would end on April 26, 2013, when Aldean filed for divorce. He and Kerr would officially come out as a couple at the 2014 CMT Awards and eventually marry on March 21, 2015. The couple announced that they are expecting their first child, a son, on May 8, 2017. Jason’s Aldean’s Instagram is filled with pictures of himself with his kids, and even shared the sonogram of his unborn son.

The Route 91 Harvest festival took place over three days, with Jason Aldean headlining on Sunday, October 1. He and his band took the stage after 9:40 p.m. At approximately 10:08 p.m., shots began to ring out from the 32nd floor of the Mandalay Bay Hotel and Casino. Aldean and his band were safely rushed off stage. Unfortunately, at the time of this writing, approximately 58 people were killed with over another 500 injuries being reported. The suspected gunman, Stephen Paddock, reportedly killed himself at the scene.

With solid selling albums, despite a world filled with streaming and illegal downloads, as well as Jason Aldean’s constant tours, the country music star has done quite well for himself financially. It is estimated that, during his last tour, each of Jason Aldean’s concerts made approximately $1.0 million per city. He’s also become part owner in Buck Commander, a company specializing in deer hunting gear. Forbes estimates that Jason Aldean’s net worth for 2017 is approximately $32.5 million.