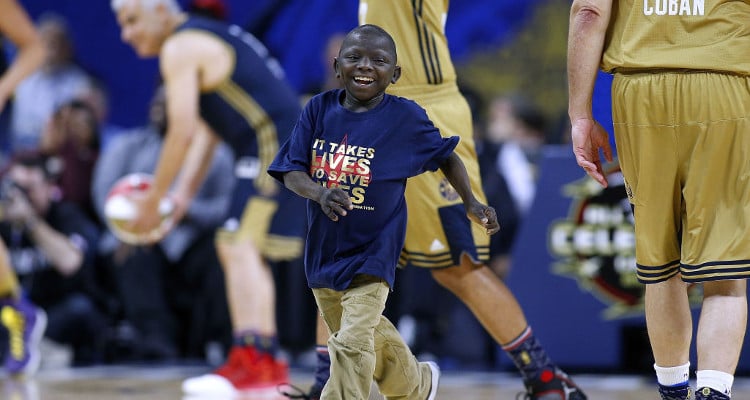 Don’t judge him by his size. Jarrius Robertson has a larger than life personality that steals the show everywhere he goes. And last night (July 12), he stole the 2017 ESPY Awards with his speech.

Jarrius Robertson has an inspiring story. The tiny teen became a viral sensation when he met his favorite NFL team, the New Orleans Saints. Since then, he has graced events like the pint-sized celebrity he is and stole the show with his sheer awesomeness. He did all this while battling a chronic disease. This inspiring kid was honored at the 2017 ESPY Awards last night. If you don’t know about this brave and awesome Saints fan, you need to crawl out of that rock and check out Jarrius Robertson’s wiki.

When he was just a few weeks old, Jarrius Robertson was diagnosed with a chronic liver disease called biliary atresia. It’s a condition where one or more bile ducts are abnormally narrow, blocked, or absent. The disease is also the reason why Robertson is much shorter than the average 15-year-old.

His Meeting with the Saints Went Viral

The then 13-year-old brave kid was a big fan of the New Orleans Saints. It was a dream come true for him when the Saints visited the Ochsner Hospital for Children where Jarrius was admitted in 2015. From that day onward, the Saints became a fan of his infectious liveliness. A staff at the hospital introduced his namesake, Jairus Byrd, to the young man.

A video of Jarrius giving the Saints a pregame speech on defensive tactics went viral. If you haven’t seen it, you need to check out the Saints’ tiny defense coordinator charm the team. The phrase “pretty much” won’t sound the same anymore!

The team couldn’t get enough of this mini energy pill. So they invited Jarrius, his parents, and his brother, Tiy Quan to their practice facility. Saints coach, Sean Peyton surprised him during his interview on Good Morning America. Peyton offered him a contract as an honorary Saint. Jarrius’ response was “you don’t have to tell me twice!”

Peyton has named Jarius social media coordinator. He not only appears in videos hilariously giving constructive criticism to the Saints, he goes to their games and reports about the same on social media. Basically, he’s big player in the Saints circle.

He Stole the NBA All-Star Game

As if he’s not a show-stealer in football, he even stole the thunder of NBA All-Stars at the game in February. The greatest moment of the NBA All-Star Celebrity game in New Orleans was when Jarrius walked on to the court late in the fourth quarter and scored a basket.

And because we know he’s the man with the playbook, he volunteered as LeBron James’ playmaker. “Yeah man me and LeBron gonna be like Jordan and Scottie Pippen.” Sure thing! But until a couple of years ago, being a child star was a foreign concept to Jarrius. According to his father, his stunted growth didn’t allow him to play football, baseball, or even go on rides at an amusement park.

It Takes Lives to Save Lives

Saints owner, Tom Benson donated $25,000 to Jarrius Robertson’s treatment and NFL commissioner, Roger Goodell has promised to match Benson’s donation. After receiving a liver transplant in April, he was honored with the Jimmy V Perseverance Award at the ESPY last night.

Looking dapper in a black and white custom suit, Jarrius and his parents stepped on stage to not just receive the award from John Cena, but also echo Jimmy V’s words. He said, “Don’t give up, don’t ever give up. These words by Jimmy V I have been living my entire life.” As usual, his speech was packed with humor while both Jarrius and Jordy spoke about the importance of organ donations.

The Saints and many others in the NFL are super excited for their little defense coordinator. The team has also set up a GoFundMe page in his name for people who wish to contribute toward his medical expenses.