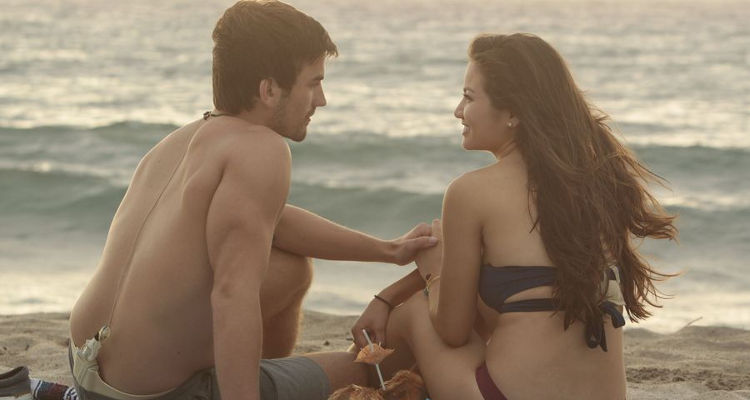 By now, it has been well-established that Ashley Iaconetti was truly, madly and deeply in love with Jared Haibon. Unfortunately, he didn’t know or care about her feelings for him, despite her all but screaming his name from rooftops. Their friendship continued nonetheless, with Iaconetti’s unrequited love for Haibon getting further fueled by his mixed signals. Iaconetti alleged that he sent her flowers and was constantly doing super sweet things for her, that only a boyfriend would normally do. Enter Caila Quinn. Jared was immediately drawn to the beauty, much to the dismay of Ashley. Quinn apparently felt the same way about him and picked him for a date. The two hid their relationship from Iaconetti for fear of a major blow-up, and rightly so. Finally, Haibon came clean to Iaconetti about moving on with Quinn, who surprisingly wasn’t too sure of her feelings for him. Ouch! After going back and forth for a while, the pair split up and decided to leave Bachelor in Paradise, while Iaconetti moved on with Wells Adams. Bet no one saw that coming!

Are Jared and Caila Still Together?

In an interview, Haibon claimed that his much-touted ‘friendship’ with Iaconetti remained intact, but made no mention of his former flame Caila Quinn. Perhaps he’s still nursing his wounds? We can’t blame him either; her uncertainty about her feelings for him and their shaky relationship, definitely had to have taken a toll on him.

Haibon has gone so far as to say that he does not want to appear on any more Bachelor franchise shows. It looks like his bruised and broken heart can’t take any more beatings. In an interview, he stated, “This is my last Bachelor show. Another reason I wanted to go on was because I knew if I went on, this is it. I’m very happy that I went on, and this is absolutely my last show with the Bachelor franchise. Unfortunately, I hate saying that because I love the people that work here. I love coming into this experience and the possibility of finding love on such a grand scale.” It’s safe to assume that the unhappy ending of Haibon’s relationship with Quinn definitely left a bad taste in his mouth.

Are Ashley and Jared Still Friends?

Once upon a time (AKA a year ago today), a girl who thinks she’s a princess met a prince with a killer jawline. They didn’t live happily ever after in the traditional sense, but they did become great friends. ???? (Sorry I posted a bad hair pic of you, @jaredhaibon.)

Congratulations to a great man, Ben H, and his fiancé Lauren B!! You deserve all the happiness in the world buddy

According to Jared’s Instagram feed, it seems like he and Ashley are still good friends and frequently post photos of their outings and activities together. As for Quinn and Iaconetti’s relationship, fans are still wondering whether whether they’re BFFS or sworn enemies, given their complicated history. Well, according to Quinn they’re neither. In an interview, Quinn explained, “Ashley and I had hung out a couple of times. I still to this day think she’s super sweet and super genuine, and hope one day we can get back to where we were. Before Paradise, we had hung out, and she said, ‘Caila, whatever you do, don’t come to Paradise, ‘cause I know Jared will like you.’ And I said, ‘Don’t worry, I’m not coming.’ At the time, I was dating somebody. I had no intention of coming…But, originally, I had mentioned to her I wouldn’t come. I had made that promise. And apparently, I should have called her…I should have called her, at the end of the day, [but] she was acting as if we were getting engaged, he’d gotten me a ring, and we were madly in love.”

In case you missed last week’s episode of Bachelor in Paradise click here to find out everything that happened with your favorite couples!