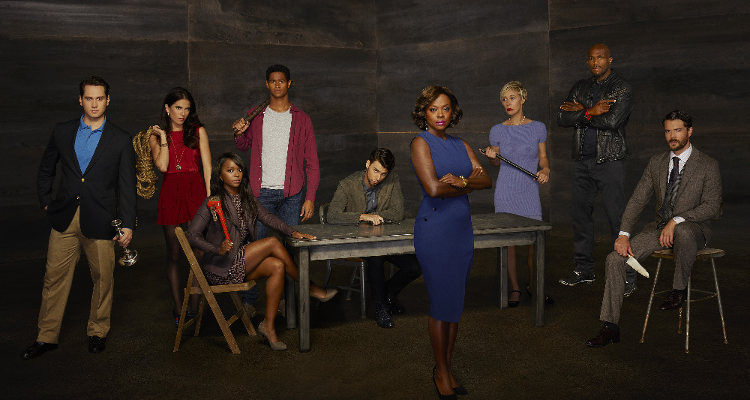 Eyes front and center. Professor Keating is back! #HTGAWM

Meet the How to Get Away with Murder season 3 cast right here:

#1 Annalise Keating (Viola Davis): Annalise is a strong and self-sufficient criminal defense attorney, based in Philadelphia. She is the widow of psychologist Sam (Tom Verica), who was cheating on her with a college student and was subsequently murdered. She is a Professor at the Middleton University, where she hires five students to intern at her firm. Portrayed by Emmy-award winning actress Viola Davis, Annalise is a brilliant lawyer who unwittingly gets involved in her students’ transgressions.

Get ready! #HTGAWM returns in 2 weeks!!!

#2 Connor Walsh (Jack Falahee): One of the series’ main characters, Connor is part of the Keating Five. He is openly gay and is portrayed as sly and sophisticated. Connor is narcissistic in nature, and manipulates his way through life using his good looks and charm, until he meets a computer technician named Oliver Hampton (Conrad Ricamora), and begins an on-off relationship. He is confident and is used to getting his way with people.

#3 Michaela Pratt (Aja Naomi King): An ambitious overachiever, Michaela aspires to become like Annalise some day. She has a stellar resume and is engaged to her wealthy fiance, Aidan Walker, who actually turns out to be gay. Michaela is smart as a whip, but is afraid to do anything that will ruin her career. She is a prominent member of the Keating Five, and participated in the murder of Annalise’s husband. In the season 2 finale, she had a drunken encounter with her friend Asher and immediately regretted it.

#4 Laurel Castillo (Karla Souza): Laurel is intelligent but is often underestimated by her classmates, because of her quiet nature. She is an idealist who graduated from Brown University, and wanted to help the less fortunate. Laurel stays under the radar and has a dark side that no one knows about. She maintains a distance from her family and considers them to be a bad influence. She gets involved with Annalise’s associate, Frank Delfino (Charlie Weber).

#5 Wesley Gibbons (Alfred Enoch): Wes seems to be one of Annalise’s favorite students, as she shares a special bond with him and looks out for his best interests. However, season 2 of HTGAWM revealed a complicated connection between the two, as Annalise had a significant role to play in Wes’ mother’s suicide a decade ago. Wes is a decent and honest fellow, always wanting to do the right thing, but is met with trouble. He gets involved with the mysterious Rebecca Sutter (Katie Findlay), who subsequently gets brutally murdered. At the end of the How to Get Away with Murder season 2 finale, Wes finally meets his biological father, who tragically gets shot by an unknown person right in front of him.

The cast of How to Get Away with Murder also includes Billy Brown (Det. Nate Lahey), Matt McGorry (Asher Millstone), Charlie Webber (Frank Delfino), Liza Weil (Bonnie Winterbottom), Conrad Ricamora (Oliver Hampton) and Katie Findlay (Rebecca Sutter). For fans wondering how to watch How to Get Away with Murder online, check out ABC’s official website for more information.