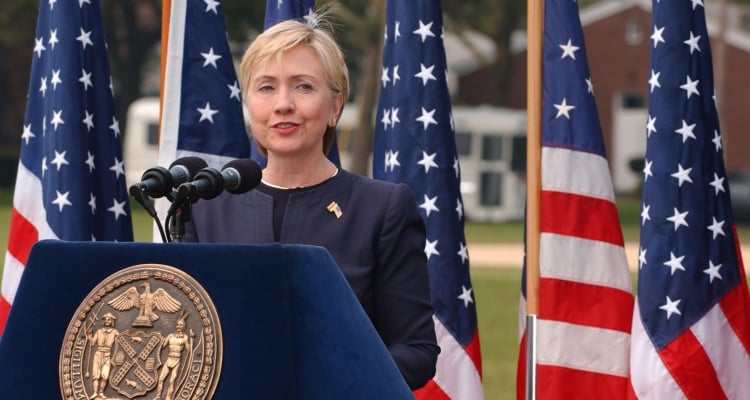 The Hillary Clinton collapse video took place as the Democratic candidate was leaving Ground Zero in Manhattan on Sunday, after attending the 9/11 ceremonies. The ceremony was the fifteenth anniversary of the September 11, 2001 terrorist attacks, with President Barack Obama, Clinton, and Donald Trump all in attendance.

The video is available on YouTube and all over social media, such as Twitter and Facebook. The online video (posted by an onlooker) shows Clinton leaning on a short steel pillar, while waiting outside of her van. Shortly after the doors open, Clinton is seen shaking and stumbling, struggling to stay still. She nearly falls to the ground but is caught just in time by her security staff. They didn’t seem very surprised (almost as if they know this sort of thing happens) and quickly escorted her into her van.

There are several videos uploaded, all of which have at least over 100,000 views, showing clearly what has taken place.

Though “Hillary Clinton Parkinson” might be trending online (thanks to conspiracy theorists and several assumptions) a rep from Clinton’s staff released a statement saying that she was not “over heated” but in fact has pneumonia. Now, the Hillary Clinton pneumonia video has been subject to many questions concerning the candidate’s health.

A law enforcement official told The Daily Beast that Clinton looked a little pale when she arrived at the 9/11 ceremony. The official went on to say that she appeared slump and stumbled, and might even have fainted.

We now know that Clinton was diagnosed with pneumonia Friday. According to sources, she is currently on antibiotics and is doing well in her recovery. In order to take better care of herself, the Democratic nominee has delayed a two-day trip to California, which was set to start on Monday.

Many are skeptical and think that Clinton has been hiding her diagnosis for some time now, trying to save face and seem healthier than she really is. It’s not uncommon for candidates to feel overworked on the campaign trail and feel exhausted or experience fatigue. This can often lead to more serious health issues if they don’t take time to rest.