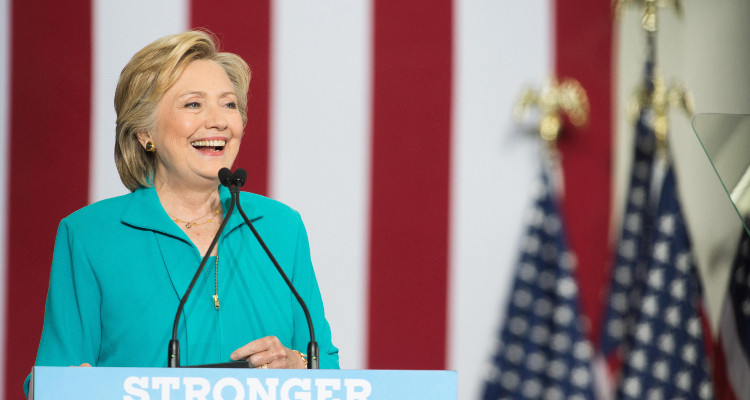 Hours after Hillary Clinton collapsed and left a 9/11 commemoration event early, the Democratic nominee was diagnosed with pneumonia. A video posted on Twitter showed the Presidential candidate being helped into a van by a one of her staff outside the memorial event. This incident has once again raised serious concerns about Clinton’s health over the past few weeks. A few weeks ago, her health became a topic of discussion when she had a case of seasonal allergies and a coughing bout. There’s also speculation whether she can continue in the race to the White House. If Clinton does have to drop out, who would be the new Democratic candidate?

According to news reports, Clinton arrived at the 9/11 memorial service around 9:30 a.m. and left the event about 90 minutes later. The throng of reporters present didn’t notice she left until later. The law enforcement officials present said that she had a “medical episode”.

It was revealed later by Clinton’s doctor, Dr. Lisa Bardack, that Clinton is suffering from pneumonia and has been put on antibiotics. Dr. Bardack also said that the 68-year-old presidential nominee was overheated and dehydrated. The temperature in Manhattan on Sunday morning was around 80 degrees and Clinton looked “pale” when she arrived, according to an official present at the event. “I have just examined her and she is now re-hydrated and recovering nicely,” Bardack said. Clinton had been taken to her daughter’s apartment which was nearby, and was attended to by Dr. Bardack there.

With Clinton’s health now a major concern, her campaign stops and schedule have been halted following doctor’s orders. With the election day nearing, the Democratic Party is now considering replacing Clinton as the presidential candidate. Top Party officials are meeting to decide the next step. They may most likely request Clinton to step down from the race and field a new candidate.

Republican candidate, Donald Trump was also present at the same event but incidentally hasn’t commented on this episode. The Republican campaign have fanned theories that Clinton does not have the stamina to be be President at 68 years of age. Dr. Bardack has repeatedly reported that Clinton is in the pink of health. Neither Trump, who’s 70 years old, nor Clinton have released their full medical records. President Obama’s former physician, David L. Scheiner said to the Washington Post that the candidates should reveal their medical histories, as they are quite advanced in age.

Trump’s theories about Clinton’s health has not only brought sharp focus on the Democrat nominee, but also on Trump himself. The Republican candidate said that he will reveal his “personal health regimen” on Dr. Oz this week.

While the Democrat Party is deliberating Clinton’s candidature, they’ve also said that it’s up to her to step down or not. Later, after Clinton left the event abruptly, she emerged out of her daughter’s house and posed for pictures with a little girl. She told the reporters present that she was “feeling great”.

Clinton’s future events have been canceled for the time being as she recovers. It remains to be seen what the Democratic Party decides about her candidature.