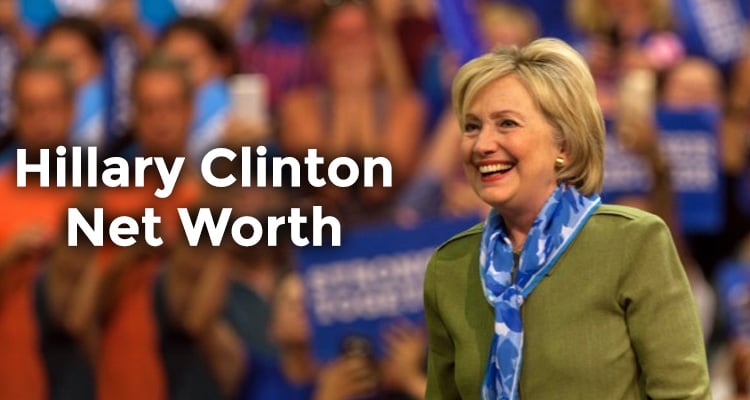 Instead of searching the web, feel free to get all the information you need on Hillary Clinton’s net worth here.

In 1975, Hillary married former president, Bill Clinton and together they had their daughter, Chelsea in 1980, when they lived in Arkansas. Despite the very public cheating scandal when Bill served as president, the Clinton’s marriage survived and continues to remain in the public eye. Hillary is also now a grandmother to Chelsea’s two children, Charlotte and Aidan.

Hillary’s lucrative book deals have also been helpful to her net worth. She received $8.0 million for her memoir as First Lady, Living History. It was later followed by her book, Hard Choices, which covered her work during the Obama administration, which reportedly came with a $14.0 million advance!

Despite being broke when she and Bill left the White House, they managed to build themselves up again, while getting out of debt. In an ABC interview with Diane Sawyer, Hillary said:

“We came out of the White House not only dead broke, but in debt,” Clinton told Sawyer, referring to the hefty legal fees that incurred during their White House years. “We had no money when we got there, and we struggled to, you know, piece together the resources for mortgages, for houses, for Chelsea’s education. You know, it was not easy.”

Despite the e-mail leaks controversy that was closed (without criminal charges) Hillary has made a noticeable amount of progress in her presidential campaign, hoping to make history as the first female president of the United States of America. During last week’s DNC, Hillary had several A-list celebrities support her campaign and is currently leading in the polls against Donald Trump.

For more information on Hillary Clinton, take a look at some of our previous posts, here.