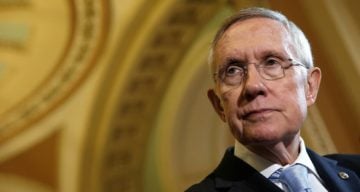 United States Senator from Nevada, Harry Reid may not be very memorable due to his low-key persona, but that didn’t stop the Senate Minority Leader to express his opinions about Republican Presidential Nominee, Donald Trump. The Democratic Party member took to the Senate floor to call Donald trump a “spoiled brat”, a “con artist” and a “human leech who will bleed the country.” With his open remarks in the senate about Trump, Reid definitely caught some attention and now many people want to know more about this politician, like his net worth, his family and his age.

Reid didn’t mince his words in the Senate on September 15. He said that Trump is only concerned about himself, and he expressed concerns about the integrity and the security of democracy in America. Reid also brought up Trump University, which is notorious for being embroiled in lawsuits from former students, who claim they were cheated out of money. He said that Trump would turn “America into a big scam just like Trump University,”. The 76-year-old Senator, who retires in 2017, will be remembered for these strong words, “”Trump is a human leech who will bleed the country and sit at his golf resort laughing at the money he has made, even though working people have been hurt and ruined,”. Public service was very lucrative to this lawyer and democrat.

Harry Reid’s net worth is estimated to be around $10 million.

Here’s some facts about the man who’ll go down in history for calling Trump a “leech.”

Reid’s family background was a far cry from his current financial status. The third of four sons, Ried’s family reportedly lived in a “tiny wood shack with a tin roof.” His father was a miner with a penchant for drinking and his mother did the laundry for brothels in Nevada where they lived. His grandmother was an English Immigrant. His father commited suicide in 1972 with a gunshot to the head, when Reid was 32 years old.

The place where Reid lived had no high school, so he lived with relatives in Henderson and attended Basic High School where he took up boxing and football. There, he met Mike O’Callaghan, who would become the future Governor of Nevada. O’Callaghan was a teacher and served Reid as his boxing coach. After graduating high school, Reid studied political science and history at Utah State University. Following Utah, he went to George Washington University Law School to study law, while working for United States Capitol Police.

After law school, he served as Henderson’s city attorney and was later elected to the Nevada Assembly. In 1970, Reid was O’Callaghan’s running mate for the elections and after winning, O’Callaghan appointed Reid as Lieutenant Governor of Nevada. Reid became a member of the Democratic Party in the 1980s and subsequently entered the Senate. In 2011, he called for Nevada’s brothel industry to be outlawed based off the sad stories of brothel conditions he heard from his mother. Reid and his wife, Landra Gould have five children together. His son, Rory is following in his footsteps.

When Reid was serving as the chairman of the Nevada Gaming Commission, he was approached by Jack Gordon, the one who’d marry LaToya Jackson in the future. Gordon offered Reid a bribe to get approval for new games in a number of casinos. A furious Reid called the FBI to catch Gordon red-handed and arrest him. When the FBI stopped the transaction as planned, Reid lost his cool and attempted to strangle Gordon! For this assault, Reid was sentenced to six months in prison. In 1981, Reid’s wife found a bomb in their family car, which Reid suspected was planted there by Gordon. However, the accusation hasn’t been proved in the court of law.

Few people can boast of inspiring the illustrious Mr. Martin Scorsese. Dick Smothers’ character in the Scorsese film, Casino (1995) was inspired by Reid as the Nevada Gaming Commission Chairman. If you haven’t seen the classic De Niro film, it’s definitely one you want to check out!