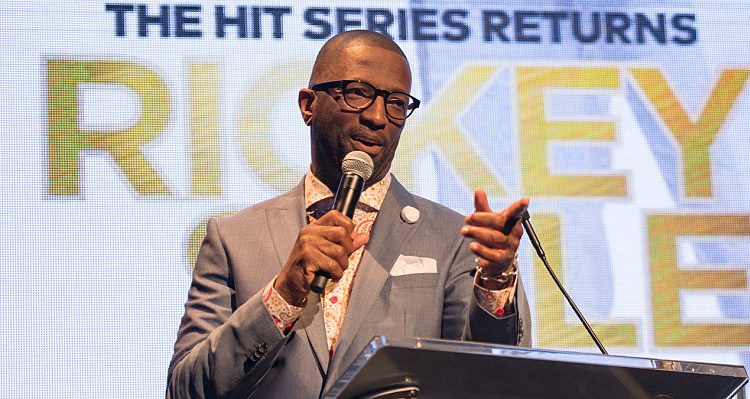 Who Is Rickey Smiley?

Broderick “Rickey” Smiley was born in Birmingham, Alabama, on August 10, 1968. He is the father of six children.

Posted by Rickey Smiley For Real on Tuesday, February 7, 2017

Smiley graduated from Alabama State University. While there, he became a member of the Omega Psi Phi Fraternity and Kappa Kappa Psi National Band Fraternity.

Even though he is best known as a radio host, Smiley also worked as a stand-up comedian and television show host. His style of comedy is particularly notable these days, as he works cleanly with very little in the way of cussing. This style of comedy lent itself very well to his career as a television personality, as well on the radio.

Rickey Smiley began doing well as a stand-up comic during the early 2000s with a set that often included characters like Bernice Jenkins and her grandson. Over the course of his stand-up career, he appeared on shows like the Def Comedy Jam, Showtime at the Apollo, and the Uptown Comedy Club. Given his sets were clean, airing his material would have been fairly easy.

Smiley’s radio career began as a morning show host in April of 2004 on KBFB 97.9 in Dallas, Texas. KBFB, better known as “The Beat” felt that his personality, as well as his brand of comedy, was a perfect fit for their morning show.

By 2008, Smiley signed a syndication deal for The Rickey Smiley Morning Show with Syndication One (Radio One’s syndicated radio division). Moving the home base of the radio show to Atlanta’s WHTA 107.9 or Hot 107.9, the show is a syndicated morning show on numerous urban radio stations across the United States.

His success in radio and comedy also bled over into television and film. He had minor roles in shows like The Way We Do It, Let’s Stay Together, and Star, as well as films like Friday After Next, Stomp the Yard 2, and Baggage Claim.

Time for a new episode of #RickeySmileyForReal!! Tune in to @TVOneTV RIGHT NOW!!!!

Smiley also had two of his own TV shows, The Rickey Smiley Show that ran from 2012 to 2014, and a reality show called  Rickey Smiley for Real, that was on the air from 2015 to the beginning of 2017. Both shows aired on TV One.

What Happened to Rickey Smiley in Dallas?

Radio is a business that goes through changes, and when ratings are down, on-air talent is the first to be changed. In the case of The Beat 97.9, apparently, the ratings are down for The Rickey Smiley Morning Show. And given that Smiley has been on the air in the mornings since 2004, they’ve decided to change things up.

The Beat is replacing The Rickey Smiley Morning Show with Veda Loca in the Morning. So, Rickey Smiley’s 97.9 Dallas days seem to be coming to an end, at least for now.

In a video post, Smiley mentions that he isn’t angry. In fact, he’s a little proud, as Veda Loca got her start working on his show while they were based at The Beat. He also said that he’s sure she’ll do a great job.

In the meantime, regular listeners who don’t want to switch may want to look at the station listing on his website to see if there is a station close enough to still be picked up.