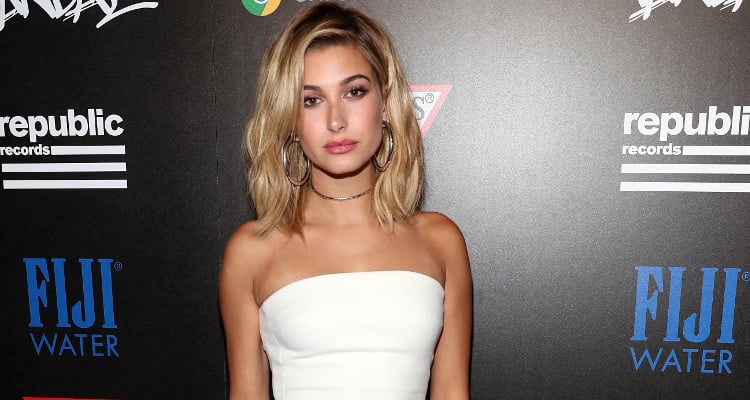 This has been great year so far for model Hailey Baldwin. Her modeling career is on an upswing, especially now that she is the new poster girl for the latest Guess Jeans campaign! Baldwin is sharing her joy with fans on Instagram.

For Hailey Baldwin, 2017 is off to a wonderful start! Baldwin is the new model for the latest Guess Jeans campaign that was released this month. She will also appear in Guess Inc.’s 35th-anniversary campaign in March. To top it off, it seems that Baldwin (who was spotted holding hands with pop star, Justin Bieber late last year in Los Angeles) may have rekindled the Hailey Baldwin-Justin Bieber romance, much to the delight of their fans. According to a source who saw them together, “Justin and Hailey ran through the lobby of the Montage and into an elevator together. They looked happy, giggly and were holding hands.” Ain’t that sweet?

Baldwin posted a photo of herself and two pals on her Instagram account. All three are wearing red dresses with “Kids in Red” written across the photo.

Having the Time of Her Life

Hailey Baldwin’s hot pics flood her social media accounts. Hailey Baldwin’s Instagram account is full of photos of her modeling campaigns, having fun with friends, and on magazine covers. There are a few pictures of her uncle, Alec Baldwin thrown in for good measure. Hailey Baldwin is Stephen Baldwin’s daughter. No wonder the girl is so confident and sure of what she wants! Having been brought up in the entertainment industry, Baldwin is a natural in front of the camera.

Climbing the Ladder of Success

Though Hailey Baldwin is just 20 years old, she has already appeared in Tatler, LOVE, Teen Vogue, Vogue, and W. She also modeled for prestigious brands like Ralph Lauren, Tommy Hilfiger, French Connection, Dolce and Gabbana, and Elie Saab. Now that Baldwin bagged the Guess Jeans campaign, her career has entered new heights. There is no doubt that she is poised for even greater things!