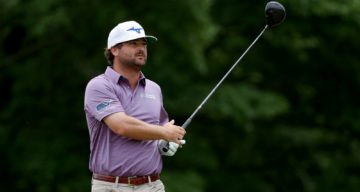 Greyson Sigg during the Final Round of the Visit Knoxville Open at Holston Hills Country Club on May 16, 2021 in Knoxville, Tennessee. (Photo by Dylan Buell/Getty Images)

The next big thing on the greens is Augusta’s Greyson Sigg. The young golfer on the Korn Ferry Tour has already secured his PGA Tour card for next season with a big win at the Visit Knoxville Open. The pandemic ruined his PGA bid last year, but it seems 2021 is Sigg’s year to advance to the big leagues. Golf watchers want to know more about who this rising new star of the course is. So, we turn the spotlight onto the talented golfer in this Greyson Sigg wiki.

Greyson Sigg was born on February 17, 1995, and hails from Augusta, Georgia. He is one of two children born to David and Karen Sigg.

Greyson’s older brother, William Sigg, also played golf. The brothers have faced off on the greens, and Greyson has beat his brother at least once. William and his partner are currently based in South Carolina.

Before graduating from Richmond Academy, Greyson Sigg was already winning accolades in golf, including three consecutive regional championships. A standout amateur/junior player, he knew exactly where he was going to play collegiate golf.

Greyson’s grandfather and mother graduated from the University of Georgia, and a young Greyson had always been a Bulldog fan. In 2012, he signed a letter of intent to attend Georgia.

He majored in sports management and made his athletic debut in the 2013-14 (freshman) season. Among his many titles, he also earned the Jack and Mary Dinos Scholarship, was the Bulldogs team captain in his senior year, and also set multiple records.

Sigg is currently ranked No. 3 on the Korn Ferry Tour. He was a top prospect to enter the PGA Tour depending on his performance this season, and he didn’t disappoint.

Sigg has been in a relationship with a woman named Katie Haack for almost a decade. He isn’t very active on social media, but she occasionally features in his posts.

Katie is the daughter of Chris Haack, the Bulldogs men’s golf head coach and Sigg’s mentor. Coach Haack knows Sigg’s skill and potential best, as the young golf star has been a regular presence in the Haack residence.