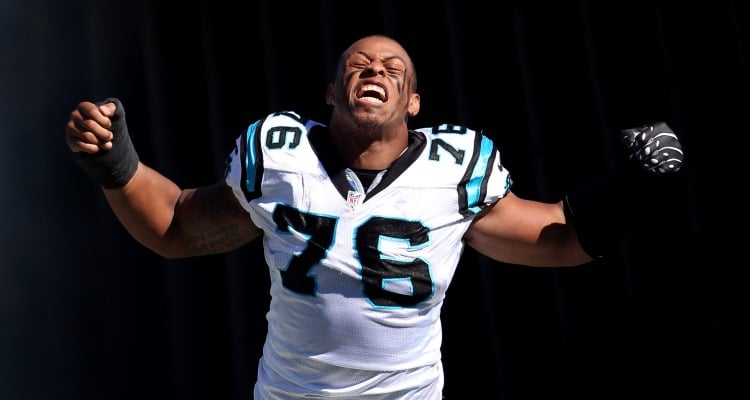 Greg Hardy is definitely excited to switch careers. The former Dallas Cowboys defensive end has caused a lost of controversy for his behavior, and has decided to say goodbye to the pigskin and shoulder pads to don a new uniform in the MMA.

For details on Greg Hardy’s MMA career, and details like Greg Hardy’s height, Greg Hardy’s age, Greg Hardy’s weight, and Greg Hardy’s domestic violence scandal, everything you need to know is right here in our Greg Hardy wiki. Greg Hardy’s Instagram (@overlordkraken) doesn’t reveal very much about his life, but you can visit his Twitter account for recent updates @GregHardyJr.

The 28-year-old has been training for several months and has attracted several promotions who wish to sign him. He’s had no previous extensive martial arts background but he told MMAFighting.com, “I’m very focused and excited to start my MMA career. I’m going to do this the right way; I can assure you of that.” Hardy stands at 6 ft. 5 in., and weighs 280 lbs.

Hardy was arrested for violently assaulting and threatening an ex-girlfriend. On July 15, 2014, he was found guilty and was sentenced to 18 months on probation. He appealed the decision and the prosecutor’s office dropped the charges, explaining their inability to locate the victim, and their discovery of “reliable information” suggesting the two parties had settled. He may have escaped the legal consequences, but he could not escape the consequences to his career and the onslaught of backlash and controversy surrounding his arrest and trial.

The backlash surrounding his abuse scandal escalated after news media outlets began comparing his case with other NFL-related domestic violence cases. As a result, Hardy was deactivated from the Panthers. The NFL placed him on the exempt list on September 17, 2014, which allowed him to draw his salary but could not participate in team activities. This was the end of his run with the Panthers.

Soon after, he was signed as a free agent on a one-year $11.3 million contract with the Dallas Cowboys on March 18, 2015. This did not last long. On April 22, 2015, Hardy was suspended for 10 games after the NFL’s two-month long investigation discovered enough credible evidence that he had “violated NFL policies in multiple respects an with aggravating circumstances.” That punishment was later reduced to a suspension of four games on July 10, 2015. Hardy’s charges were wiped clean from his record on November 5, 2015.

However, this wasn’t the end of the media backlash, or the end of Hardy’s misconducts. Less than a month ago, on September 26, 2016, Hardy was arrested for possessing cocaine in Dallas, Texas.

Hardy is having a rough time with his career and the law, but faithful fans of the footballer are hoping he will do well with his new MMA career. Critics, on the other hand, are cracking dark jokes about the athlete.

Does Greg Hardy have any fighting experience other than….you know… pic.twitter.com/1nvDBkiSn7