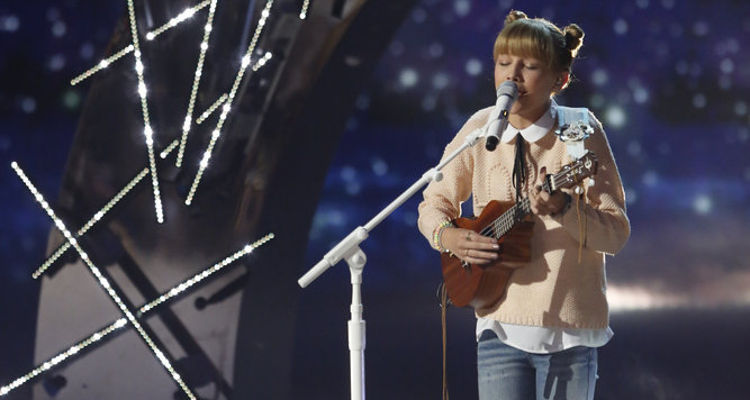 Grace VanderWaal needs no introduction. The 12-year-old singing sensation has captured the hearts of America’s Got Talent viewers everywhere. Devoted fans of the soulful singer are searching for terms like, “Grace VanderWaal wiki,” on the internet to find out more about the musical prodigy’s personal life, but don’t fret; we’ll tell you everything you need to know about Grace VanderWaal right here.

Here are five facts to know about the youngest contestant on America’s Got Talent:

#1 She Began Making Music At the Age of Three

Just got in LA. and decided to switch things up with curls????

Grace VanderWaal was born on January 1, 2004, in Suffern, New York, to Tina and Dave VanderWaal. She has two older siblings; a brother Jakob and a sister Olivia, whom she considers her best friend. She even has two pet dogs to keep her company while she pens her original compositions. Grace’s family’s support has been pivotal in helping her reach where she is today, and her mother Tina is known to get emotional when the judges make their decision. At the tender age of three, this talented powerhouse began cooking up songs in her head, and belting them out on her wireless microphone.

Yes, you read that right. Grace’s young age has made sure she has a head-start on her competitors, even before launching what looks like an incredibly promising career. She is the youngest contestant ever on America’s Got Talent to make it to the final round. Her soul-stirring voice has captivated the judges, who can’t seem to stop singing her praises. Before her AGT audition, Grace had sung her songs for small audiences, but never in front of the endless sea of spectators that comprise the America’s Got Talent viewers.

#3 She Composes Her Own Songs

Since her initial performance on America’s Got Talent, Grace had the judges eating out of the palm of her hand. She stunned the judges with a rendition of her own original song, “I Don’t Know My Name,” strumming her instrument of choice, the ukelele. Judge Howie Mandel was so struck by her performance that he pressed the golden buzzer, which skyrocketed Grace straight to the live show. In the quarterfinals, Grace played another original song, titled “Beautiful Thing,” dedicated to her sister Olivia. She also received a standing ovation from the speechless judges as she crooned her semifinal single “Light The Sky,” and advanced through to the finals.

#4 She is the Next Taylor Swift

Grace warmed even the coldest of hearts with her moving performances. The usually hard-to-please Simon Cowell proclaimed that Grace could be the next Taylor Swift. After stealing the show with her semi-final performance, Howie Mandel stated that Grace would be “bigger than Taylor Swift.” He said, “I predict you are the biggest star to ever come out of this show.” Simon further praised her exclaiming, “There’s something so sweet and so charming about you and so real. I am going to predict we’re all going to remember the moment, in years to come, when we saw Grace sing live for the first time.” Fellow judge Heidi Klum struggled to find the right words and settled on calling Grace “one in a million.”

#5 Her Choice Instrument is the Ukelele

Last selfie while in the shore???? #leavingsoon

The adorable Grace VanderWaal bought herself a ukelele on her 11th birthday, with her own allowance! Oblivious to her parents, she taught herself the instrument watching YouTube videos. After performing for her family, Grace progressed to performing at open mic nights around New York and New Jersey. It’s no wonder then, that Judge Howie Mandel thought her brilliant performance deserved the Golden Buzzer. Surprisingly enough, Grace’s friends had no idea that they were in the midst of a musical genius. The modest musician prefers to keep a low profile and confessed that “Most of my friends don’t really know I sing.”