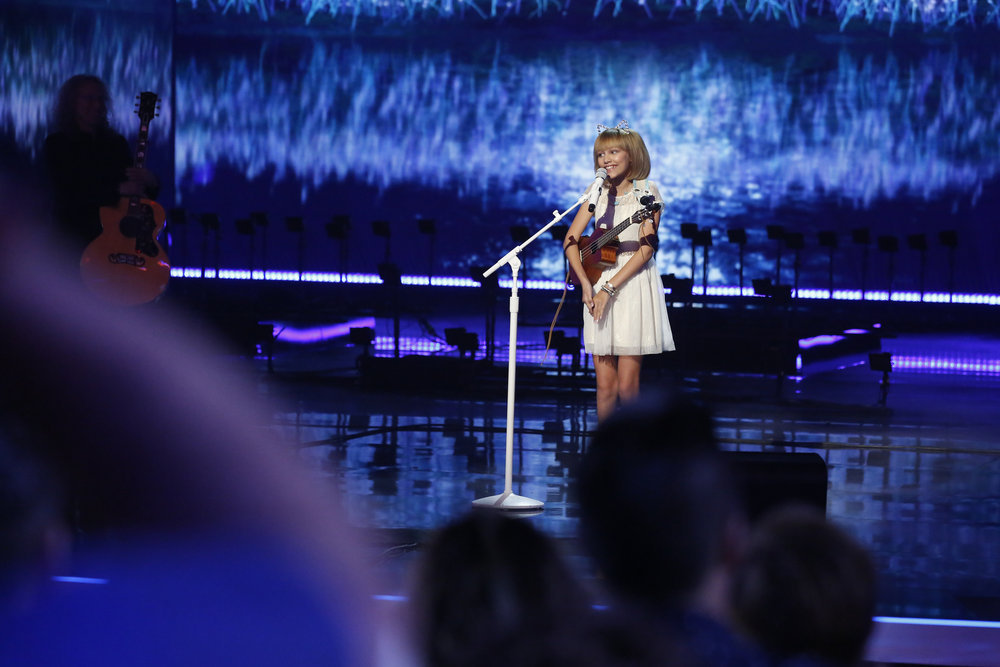 Grace VanderWaal’s parents are the probably the happiest people in the world right now. That’s because their beloved daughter, dubbed ‘Amazing Grace’, has won the top prize in the America’s Got Talent 2016 competition. It rained confetti and praises on VanderWaal, as the judges and America voted her the winner of the show. Grace VanderWaal’s family was there to watch her big moment including Grace VanderWaal’s mother and Grace VanderWaal’s father. The AGT 2016 winner is just 12 years old, but is already a sensation all across America.

VanderWaal started out nervously but as soon as she started singing, it was clear that she was an exceptional talent. She played her ukulele and sang an original song called “I Don’t Know My Name.” She herself wrote the song and composed the music for it. By the time she finished her song, the judges were in awe. Howie Mandel called her “a living, beautiful, walking miracle,” while Simon Cowell named her the “next Taylor Swift.”

The credit needs to be given to VanderWaal’s parents, who have encouraged her and supported her throughout this incredible journey. VanderWaal was a regular 12-year-old girl just a few weeks ago and now she is a household name all over America. In fact, her fans are already posting cover versions of her song, “I Don’t Know My Name” on YouTube! When people start singing your songs, you know you’ve clearly got something special. Vanderwaal certainly has something special, and at such a young age, America has only scratched the surface of Vanderwaal’s musical capabilities.

Grace VanderWaal was born on January 15, 2004 to her parents, Tina and Dave VanderWaal. She has two older siblings, a brother named Jakob and a sister named Olivia. She lives in Suffern, New York with her family and their two dogs. Her family is the reason that VanderWaal has achieved so much at such a tender age. Her mother gets emotional each time the judges have to make their decision. But now, her mother can breathe easy, as it was her daughter he managed to blow the competition away week after week, proving that even the biggest champions can come in small packages!  Her parents were the ones to give her the strength and support she needed to win the competition, and make that million dollar dream come true!

VanderWaal is a prodigy in the truest sense of the word. Her mother, Tina says that VanderWaal was singing songs right from the age of three. Talk about starting young! She bought her ukulele on her 11th birthday with her own allowance. Her parents had no clue, but VanderWaal actually learned to play the ukulele by watching YouTube videos! Now, she is inseparable from her ukulele and owns several of them. After gaining confidence by performing in front of her family, VanderWaal started performing in front of small audiences in New Jersey and around New York. The funny thing is, her friends had no idea that VanderWaal could even sing so well!

The future is very bright for VanderWaal. She has won the prize money of $1.0 million and in October, she will headline her own show in Las Vegas. At such a young age, the music industry could just eat her up, so she will have to depend on her family for guidance and support. Like she said, she’s not made of “Clay” and she will not be molded in any way. She has come so far already because of their incredible support and love, that it looks like Vanderwaal is going to be just fine. In the past, many young musical sensations have lost their way, while trying to navigate the path of growing up in the spotlight. But already at only 12-years-old, VanderWaal seems so level headed and confident in herself, that her music will guide her in all the right directions. It certainly helps that she has an amazing family and support system backing her through this exciting time!