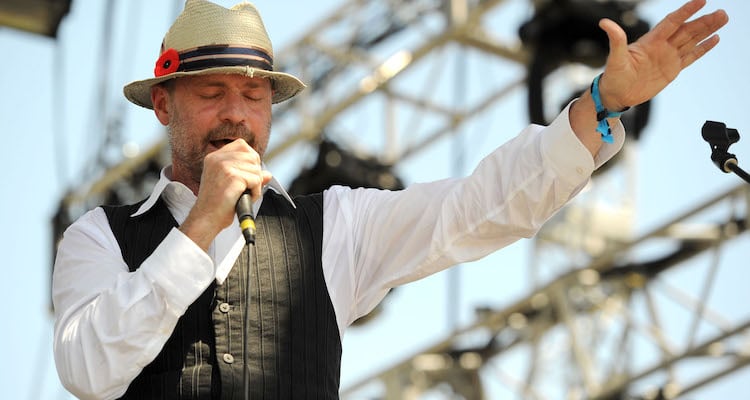 The name Gord Downie might not mean much to people outside of Canada but to the Great White North, he was one of the country’s most beloved musicians, along with his bandmates in the Tragically Hip. Since he was diagnosed with a terminal brain tumor in 2016, we’ve known that our time with Gord was going to be cut short, and unfortunately that time ended last night as Gord passed away. With this Gord Downie wiki, we’ll celebrate the life of this Canadian songwriter, as well as his career and Gord Downie’s cause of death.

Gordon Edgar Downie was born on February 6, 1964, and grew up in the suburb of Kingston, Ontario called Amherstview. Like most Canadian kids, Gord loved hockey but he loved music more. While he was attending high school in Kingston at Kingston Collegiate and Vocational Institute, Gord would end up meeting the guys that would eventually form The Tragically Hip.

The Beginnings of a Band

The Hip, as they are known by their fans, formed in roughly 1983 with the line up consisting of Gord Downie (lead singer), Rob Baker (guitar), Johnny Fay (drums), Davis Manning (saxophone), and Gord Sinclair (bass). Davis Manning left the band in 1986, the same year guitarist Paul Langlois joined. Langlois’s joining the band would be the last line up change until their final tour in 2017.

Taking their name from a skit in Mike Nesmith’s film Elephant Parts, The Hip began to perform locally around the Kingston area, including stretches at local pubs on the Queen’s University campus before they would start to make it big.

Up to Here and Beyond

In 1989, The Hip released their first album, Up to Here and it helped blow the doors wide open to their future success. For the first time since perhaps The Guess Who, there was a band that not only rocked the stage, but completely embraced Canadian life. Their songs mentioned hockey and areas Canadians knew and grew up in. “38 Years Old” was a fictionalized song about a real escape attempt at Milhaven Institution, a prison near the band’s hometown. What’s more, The Hip never tried to hide where they were from in order to make themselves more accessible to other markets. They were Canadian and they were proud of it. This endeared the band even further with fans making them a staple of Canadian rock radio and even reach past to the border areas like Buffalo, where they would gain a solid U.S. fan base.

Eventually, Gord started recording material on his own. Songs that didn’t really seem to fit in with The Hip’s albums would become Gord Downie songs and eventually Gord Downie albums. The first of these would be Coke Machine Glow, released in 2001, followed quickly by Battle of the Nudes in 2004. These songs still had Gord’s trademark vocals but the music was a little quirkier and a little more experimental. Hip fans tend to be not only loyal to their band and it’s lead singer, but are also open to new sounds from the guys. In total, Gord released four solo albums with a fifth album that was due sometime soon.

The Coming of the End and the Secret Path

In May of 2016, Gord along with his bandmates announced that Gord had been diagnosed with glioblastoma, a type of terminal brain tumor. Knowing that at this point he was on borrowed time, Gord went to work on a few different projects. The Hip released their final album, Man Machine Poem the next month and set about on their final Canadian tour. This tour would sell out wherever it hit and demand for tickets was incredibly high. The Canadian Broadcasting Corporation or CBC worked out a deal with the band to broadcast live their final concert in their hometown of Kingston, Ontario. The show was incredibly emotional and was attended by note worthy fans like the Prime Minister of Canada, Justin Trudeau.

In the meantime, Gord had become incredibly passionate about the rights and welfare of the native people of Canada and used his final years to draw attention to this cause, speaking out about it at concerts, making trips to reserves and releasing Secret Path. Secret Path is an album inspired by the story of Chanie Wenjack, a young Anishinaabe boy who escaped from an Indian residential school and tried to make his way home. Clad with little in the way of winter clothing, Wenjack ended up freezing to death. The album was accompanied by a graphic novel by famed comic book creator Jeff Lemire as well as Gord donating all the proceeds to the University of Manitoba’s National Centre for Truth and Reconciliation project.

How did Gord Downie die? Gord Downie passed away October 17th, surrounded by friends and family. As of this writing, his cause of death has not been announced but it’s safe to assume that the brain tumor finally took him. And for fans, there is plenty of material to use to celebrate the life of Gord Downie. There are all of the albums from the Tragically Hip and his solo career. Beyond that, there are Gord Downie’s movie appearances in films like The Trailer Park Boys and Men with Brooms which show off a bit of his sense of humor. There is also his charity work in which fans can still continue to take part. Gord Downie’s net worth is estimated at 11 million dollars, we know that some of it is head toward charity. which shows what kind of person he was in life and in death.