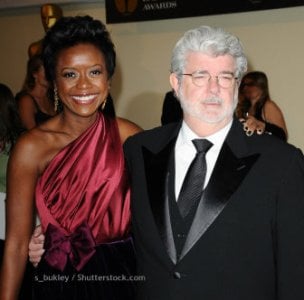 Star Wars director George Lucas, 69, recently tied the knot with his longtime girlfriend, 44-year-old businesswoman Mellody Hobson. But one big party wasn’t enough for this celebrity couple. Just a week after exchanging vows, Lucas and Hobson celebrated their marriage with another star-studded affair. This time, the festivities were held at Chicago’s Promontory Point under a lavish air-conditioned, multi-room tent near the waterfront.

Lucas made sure to pull out all the stops for his new wife. Guests were said to be guided to the tented area by a specially constructed boardwalk decorated with flowers. The entertainment for the evening was provided by Grammy winner Prince, who was backed by a 22-piece band—it doesn’t get much fancier than that.

Lucas and Hobson hosted more than 500 guests, which included some of Chicago’s most influential corporate and political figures, like Rahm Emanuel (mayor of Chicago) and Bill Daley (former White House Chief of Staff). Many of Lucas and Hobson’s celebrity friends were also present, including Robin Williams, Mark Hamill, and Hayden Christensen.

What do you think: Was it necessary for George Lucas and Mellody Hobson to spend so much money on another wedding celebration, or would you do the same if you could?