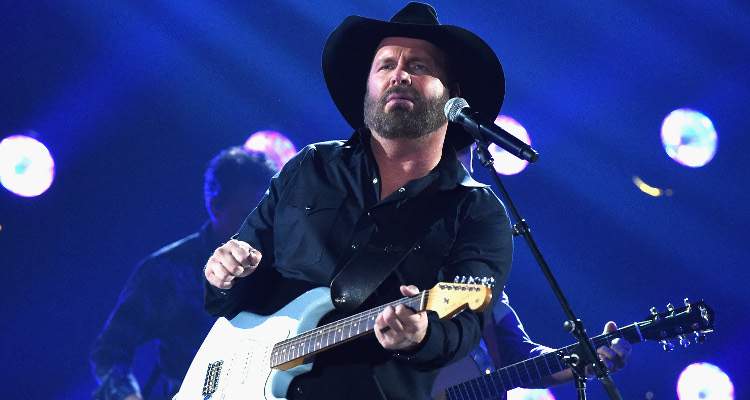 Garth Brooks took home top honors at the 2017 Country Music Association Awards last night (November 8). He plans to share his Entertainer of the Year Award with his wife and crew  who made his long concert tour successful. Garth Brooks is set to wrap his tour before making his 2018 plans.

Country legend Garth Brooks rightly thanked his wife, Trish Yearwood and his amazing crew for winning the Entertainer of the Year Award at the 2017 CMAs. He is coming off a very busy schedule these past few years. He came out of retirement and embarked on a massive record-breaking concert tour with his wife. The Garth Brooks World Tour with Trisha Yearwood is going to wrap up this year. There are only a few opportunities left to catch Garth Brooks and Trisha Yearwood live in concert. Here’s what you need to know about the Garth Brook’s tour dates, venues, tickets, and more.

After making a comeback with Man against Machine, his first album in more than a decade, Garth Brooks hit the road in 2014 for The Garth Brooks World Tour with Trisha Yearwood. With almost 400 shows in North America, Europe, Australia, and South America, it became one of the highest-grossing tours in history.

He even had to add more shows in some cities because fans just couldn’t get enough. But after three years on the road, Brooks and Yearwood are ready to go back home.

The final leg of the concert will be in Nashville, Brooks’ professional home. Before that, he’s got more stops in Spokane and Newark. Tickets for the final shows can be purchased via Brooks’ website or through Ticketmaster. Sales for these tickets go live on November 10. A limit of eight tickets per purchase will be in effect.

As listed on his website, the 55-year-old will be performing in Spokane on November 11, 12, and 14. This weekend, he will perform two shows to crowds in Spokane Arena in Washington.

Brooks’ next stop will be in New Jersey, at Newark’s Prudential Center from December 1 to 3 before heading for the final show in Nashville’s famed Bridgestone Arena at December 16.

While he performed in Nashville at different venues in the past few years, the last time he was at Bridgestone Arena was seven years ago. He performed nine shows in less than a week to raise $5.0 million for the 2010 Nashville floods relief efforts.

The following table will give you a better idea about the upcoming concert dates:

The Garth Brooks World Tour with Trisha Yearwood was his biggest project since coming out of a long hiatus. After three years, the country couple plan to get some well-deserved R&R. “Sleep. Christmas. Sleep. New Year’s Eve. Sleep,” Brooks said about his plans after the tour ends.

But it doesn’t mean the “Friends in Low Places” singer will go into retirement again. “I can tell you my retiring days are behind me … The only thing that’s going to change after December is, it’s just not going to be a constant appearance. You’re going to have to pick ‘em …” said Brooks.

He announced his upcoming schedule for the 2018 Houston Livestock Show and Rodeo and the 2018 Stagecoach Country Music Festival next year. And there will be more concerts from Garth Brooks to look forward to in 2018. “The great thing about the next year, 2018, is, we’re going to play some places for free. That’s what I like — just go for the reason of going there. And you get to play music. That’s cool.”