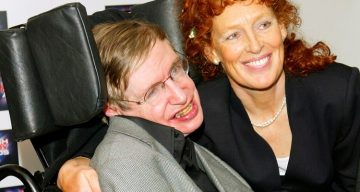 With esteemed physicist and cosmologist Stephen Hawking’s death, many are remembering his unparalleled work in the fields of theoretical physics and cosmology. But there was another side to this genius: his sense of humor! To honor that, we’re taking a look at what we think are the funniest Stephen Hawking TV moments.

Just after midnight on March 14, 2018, the world lost a bright light in the scientific community, an intellectual giant. Stephen Hawking quietly passed away at his home in Cambridge, England. The famed British theoretical physicist and cosmologist was 76 years old. However, he left more than “just” revolutionary scientific theories behind.

Steven Hawking: A Genius Who Made People Laugh

Hawking was a scientific juggernaut. Despite having ALS, a form of motor neurone disease, he was a groundbreaking scientist and researcher, the Lucasian Professor of Mathematics at the prestigious University of Cambridge in England, and the author of many essays and books, including bestseller A Brief History of Time.

Most recently, he was the Dennis Stanton Avery and Sally Tsui Wong-Avery Director of Research at the Department of Applied Mathematics at his alma mater. He also founded the Centre for Theoretical Cosmology at Cambridge.

The brilliant theoretical physicist has 13 honorary degrees and has won many awards, including the Presidential Medal of Freedom, throughout his lifetime. He was a member of both the US National Academy of Sciences and the Pontifical Academy of Sciences, and was a Fellow of the Royal Society.

On top of his genius and all of his mind-blowing accomplishments, Hawking was actually a really funny guy!

It’s something that helped get him through the profoundly difficult times related to his debilitating illness and disability, especially in his early 20s. When asked in a 2016 RadioTimes interview what it is that inspires him to keep going, he replied, “My work and a sense of humor.”

In fact, upon hearing of Hawking’s death late Tuesday night, The Simpsons writer and executive producer Al Jean tweeted out a photo of a Stephen Hawking action figure, with the words:

“RIP Stephen Hawking. A sense of humor as vast as the universe.”

Yes, that’s right; in case you didn’t know, Hawking actually played the character of himself on The Simpsons! 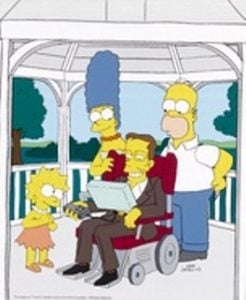 Image: FOX ©1999 THE SIMPSONS and TTCFFC

So, we’re here to pay tribute to the side of Hawking that loved to laugh, to make others laugh. A man that didn’t take himself too seriously and even poked fun at himself, even though he could blow most people out of the water intellectually.

If you saw the movie The Theory of Everything, you saw a representation of this side of the theoretical physicist. But his funny side is also pretty well represented on the small screen, so let’s take a look at some of our favorite TV moments when Stephen Hawking made us laugh!

Hawking lent his voice to four episodes of the hit animated series, The Simpsons. In all four episodes, he provided the voice-over for an animated version of himself.

My personal favorite was his first guest appearance on the long-running sitcom, which aired May 9, 1999 on Fox. “They Saved Lisa’s Brain” is episode 22 of season 10.

In this episode, Homer Simpson’s brainy daughter Lisa Simpson, disillusioned with the low level of intelligence in her home town, is accepted into the Springfield chapter of Mensa (the international society of high IQ).

With the help of Lisa, the chapter manages to take control of Springfield after running the mayor out of the city. But the power is too intoxicating even for the smartest people in the town. In-fighting in the chapter and an angry mob put an end to Mensa’s rule over Springfield.

A grumpy Stephen Hawking arrives on the scene, saying “I wanted to see your utopia, but now I see it is more of a Fruitopia.”

When a riot starts, Lisa is rescued from a bad end by a Hawking in his flying wheelchair.

The episode wraps up with Hawking having a drink with Homer at Moe’s Tavern, talking about Homer’s donut-shaped universe theory. When Homer does an imitation of Hawking, the physicist takes him out by releasing a motorized punching glove from his wheelchair.

Hawking also did the voice for the cartoon version of himself in The Simpsons episode 16 of season 16, “Don’t Fear the Roofer;” episode 20 of season 18, “Stop or My Dog Will Shoot;” and episode 1 of season 22, “Elementary School Musical.”

Although Hawking, a fan of the show, said he enjoyed his stints on The Simpsons, he also said that they’ve led to people thinking he’s a fictional character. But that just sounds like trademark Hawking humor to me!

It seemed like a no-brainer to have Hawking make an appearance as himself on The Big Bang Theory! Having Hawking on a sitcom about “nerdy” scientists (who all practically worship the famous theoretical physicist and cosmologist) was quite a coup for the show creators. And pretty exciting for fans, too!

Hawking (sometimes just his voice) was on seven total episodes of the hit comedy series.

The most memorable, and the only one where he truly appeared “in the flesh,” was an episode titled “The Hawking Excitation.” It was episode 21 of season 5, originally airing on CBS on April 5, 2012.

In the episode, Sheldon finds out that Howard has personal access to Stephen Hawking, who’s doing a lecture at Caltech. Sheldon desperately wants to meet Hawking, who he idolizes. And he also wants to get the theoretical physicist’s opinion on a paper showcasing his own theory on the Higgs boson particle. Howard makes Sheldon jump through hoops, but finally arranges the meeting. At the end of the episode, Sheldon realizes his dream of meeting Hawking, only to have his hero tell him that his whole Higgs boson theory is incorrect…based on one math error! Ouch!

“You made an arithmetic mistake on page 2; it’s quite a boner.”

Sheldon, of course, passes out from the stress. “Great, another fainter,” Hawking quips.

Skip to 0:45 in the following clip to see the scene where Sheldon meets his scientific idol and the hilarity that ensues!

While not in person, it is Hawking’s voice that is featured in two other episodes of The Big Bang Theory: “The Extract Obliteration” (2012) and “The Relationship Diremption.” The physicist’s remaining appearances on the sitcom were done as video Skype conversations in the following episodes: “The Troll Manifestation” (2015), “The Celebration Experimentation” (2016), “The Geology Elevation” (2016), and “The Proposal Proposal” (2017).

Want to see Stephen Hawking “sing” happy birthday to Sheldon? Check out this funny, but endearing scene from the 200th episode of The Big Bang Theory, “The Celebration Experimentation.”

The other animated series lucky enough to have Hawking as a voice actor was Futurama. The sci-fi adult cartoon was the brain child of The Simpsons creator, Mat Groening. It first aired on Fox in 1999, but it later aired on the Cartoon Network and then moved to Comedy Central, until the finale in 2013.

In the series, Hawking again played an animated version of himself, but this time he is a preserved disembodied head in a rocket-powered jar. Incidentally, Futurama’s Hawking could shoot lasers from his eyes! This cartoon version of the theoretical physicist is also a bit of a meanie.

Hawking did the voice for his character in two TV episodes: “Anthology of Interest I” (2000) and “Reincarnation” (2011).

He also voiced his character again in a 2008 direct-to-DVD Futurama film called The Beast with a Billion Backs. Though it was a film, it was considered to comprise the 77th to 80th episodes in the Futurama series. It also aired on Comedy Central.

My favorite scene with “Hawking’s Head” was in The Beast with a Billion Backs.

It’s year 3008 and Bender’s misuse of time travel has created a rift in the universe called “the anomaly.” Everyone is terrified. And scientists are gathering to figure out what exactly the anomaly is and how to fix it.

Professor Farnsworth takes the team with him to the “SPACEANAMOLY ‘08” scientific conference at the Institute for Advanced Book Learning, hoping to learn more about the anomaly.

Later, at the conference, Hawking addresses the entire gathering about the worrisome anomaly, saying, “In conclusion, I understand nothing about the anomaly, even after cashing the huge check I got for writing a book about it.”

Hawking’s character and voice also appeared in the 2017 game, Futurama: Worlds of Tomorrow. You can see the trailer for the game (which features the famous physicist, along with other characters) here:

Stephen Hawking will be hugely missed, not only as a husband, father, family member, friend, groundbreaking scientist, genius, and an inspiration to people with chronic illness and disabilities, but also as a guy who could make people laugh. He was a true pop culture icon and he will be remembered for years to come.