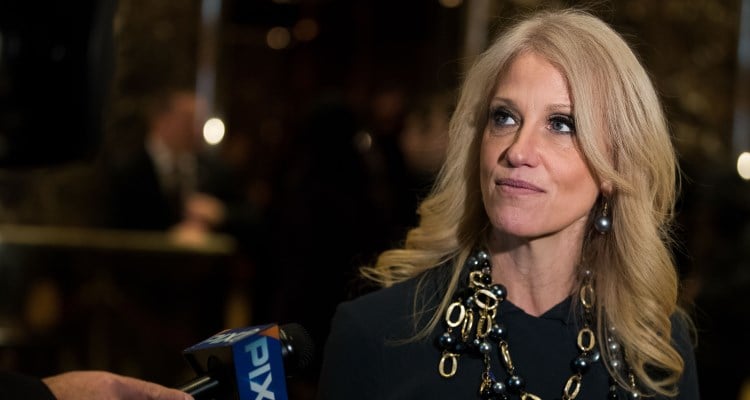 Are you ready for some Tuesday memes? We hope so, because when it comes to political memes, Kellyanne Conway is the only way to go. So, if you’re interested in seeing some of the funniest Kellyanne Conway memes, then look no further! We’ve found the best ones for you right here!

When it comes to the work week, funny morning memes can be the best cure (aside from coffee) to help you start your day off right. And with the recent political climate with President Donald Trump at the center of it, Conway is always the perfect target for memes everywhere, along with her boss.

Most recently, Conway, who is the counselor to the president, is making headlines after a photo was taken of her in the Oval Office, while on her phone. Many though that she seemed right at home in her boss’ office and some even believed her to be barefoot! Is this more fake news? Not exactly—she was preparing to angle herself to take a group shot of Trump and several leaders of historically black colleges. Social media wasted no time in attacking Conway for her “disrespectful” behavior, while others came to her defense. Before you know it, there will be a meme based on her couch gag, too! But until then, here are a few of the top funniest Kellyanne Conway memes.

I Promise to Tell the Whole Truth…

She’s often referred to as the one who coined the now overly used “alternative facts” and “fake news” response, which has become synonymous with the Trump administration. From inauguration attendance to travel bans, people have a hard time believing what comes out of Conway’s mouth.

Is She a Good Judge of Character?

Many don’t believe she’s the best judge of character, given who she chose to work for and there are others who find themselves scratching their heads at her fashion choices.

Don’t Hate Me because I’m Beautiful

Is Conway aging this fast? No—that’s actually X-Men actor Patrick Stewart dressed up in makeup and a wig, but it didn’t stop the the anti-Kelly Conway fan club from taking advantage of the obvious dig!

Do You See a Family Resemblance?

We always wonder who stays up all night to find the worst photos of Conway, and somehow finds a way to use them against her. She’s used to it by now and she may not have scales, but being compared to a raptor is probably one of the nicer things she’s been compared to, if you can believe it!

When was the Last Time You Made this Face?

I'm sorry. I couldn't help this. I can't help but go "Why?" when I hear her speak ? Please dont hate me. #kellyanneconwaymemes #imnotalwayspolitical

It’s no secret that Conway’s job is to defend her boss, but there have been many times that viewers have made this exact face when she refuses to acknowledge the facts.