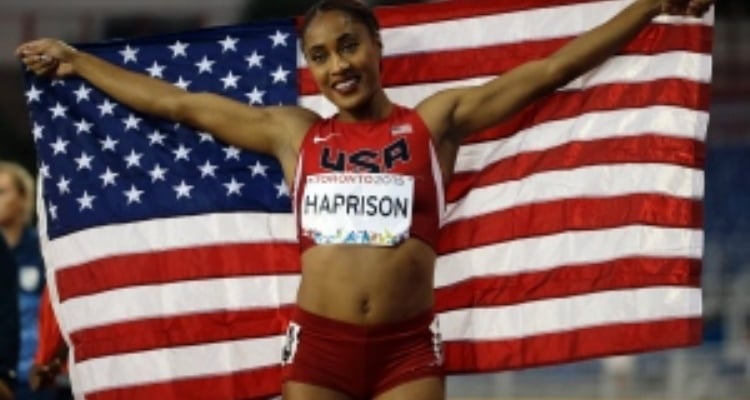 Queen Harrison is the track and field athlete who competed in the 400 meter hurdles at the Summer Olympics in 2008. You may have heard of Queen Harrison’s boyfriend, Will Clay, who is also an Olympic champion. After winning the silver medal during the men’s triple jump final, Will Claye’s girlfriend, Queen Harrison was happily surprised with an Olympic proposal! You may be searching for “Will Claye triple jump” and “Will Claye Olympics,” but when it comes to proposals, let’s be honest – it’s all about the bride-to-be! We’ve got you covered so here are five Queen Harrison wiki facts you need to know:

Three’s the Charm When It Comes to Medals

Did you know Harrison is one of nine children of her immediate household? On her website she also claims to have 12 brothers who she shares her father’s DNA with, from his other relationships. Now that’s a big family! Growing up, her father would wake her and her siblings up to do an intense workout involving push-ups, running, sit-ups and jumping jacks. Harrison believes there was always an expectation for her to be great and achieve whatever goals she set her mind to. It looks like the name was a good fit!

Despite her close-knit family and their consistent encouragement, Harrison felt like she was forced to face adult issues too soon. When her parents were incarcerated, she struggled through insecurity and abandonment issues. Being the Queen she aspired to be, she decided to focus on her academic and athletic efforts and achievements, and it has clearly carried her through!

Dancing, writing, and cooking are just a few of her hobbies outside of her athletic career. She also loves makeup artistry and fashion, which inspires her to model and design. Her website is full of portraits that display her beauty and diversity. This is definitely a well-rounded woman – great catch Claye! Harrison has a passion to help and empower youth, especially young women, and she is setting a great example with her accomplishments! Harrison also writes articles for young women about beauty, makeup tips, and healthy advice. She works with Zumba Fitness as a promotor for their classes, too! What doesn’t she do?

One of Four Proposals

The dynamic duo is just one of the four proposals that happened during the Olympics, so far! There are several adorable photos of Harrison’s reaction during the proposal that will melt your heart. In the photos, which you can find on social media, Claye is rocking an American Flag across his shoulders and as he walks through the crowd to his girlfriend, her mouth drops open as he brings out the engagement ring. There are also photos of her hands, dazzled in a patriotic red, blue and white manicure, and her ring like an orb of crystal, reflected brightly in the sunlight! This is the perfect moment for the athletic couple!