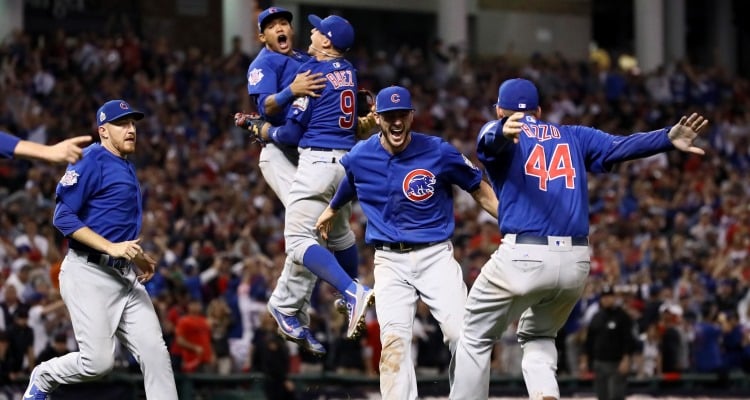 In case you missed it, the Chicago Cubs won the World Series on Wednesday! This came as a surprise to fans, but for Michael Lee, it was simply a case of Deja Vu. Who is Michael Lee? He may have been living in obscurity before, but as of Wednesday night, he is now the world’s most famous psychic—after Miss. Cleo and That’s So Raven, of course!

No, he’s not a real psychic (who plans on telling off his boss, after he wins the lottery) but he is the guy who predicted that the Cubs would win the World Series in 2016, 23 years ago! In order to learn more, fans and fellow bandwagoners have been searching the Internet for terms such as “Michael Lee predicts Cubs win,” “Michael Lee Cubs prediction,” and “Michael Lee Cubs yearbook.”

From his average high school life to his sudden social media fame, we have everything there is to know about Michael Lee and his 23-year-old World Series prediction.

By now, everyone knows that the Cubs defeated the Indians in Game 7 with an 8-7 score, but now all that anyone wants to know, is if the story of Lee’s yearbook prediction is behind the big win. It turns out— like a prophecy— it was already written that the Chicago Cubs were destined to win the World Series in 2016! After 108-year-old drought, the Cubs made it rain with a triumphant victory on Wednesday and it may be partly due to Lee’s prediction. No, Lee isn’t “The Chosen One” but it is a very odd and accurate prediction that he made in his 1993 Mission Viejo High School yearbook.

Under Lee’s yearbook photo from 1993, his quote read: “Chicago Cubs. 2016 World Champions. You heard it here first.” (Seriously, you can’t make this stuff up!)

Why He Wrote the Quote

On October 25, before the final Cubs-Indians game, Lee commented on why he wrote that particular quote.

Speaking with Chicago’s WGNTV News, Lee explained why he decided on the yearbook quote.

Lee explained the quote stemmed from a dream he had when he was a kid. The Chicago native attended high school in California before moving back to his home town, according to WGNTV News.

How the Prediction Surfaced

Lee’s prediction surfaced earlier last week, when an old classmate of his took to social media to post the famous quote and yearbook photo.

Speaking with the New York Post, Marcos Meza said he remembered the yearbook quote back in 2009, after he connected with his friend through Facebook.

“I always thought that was the coolest quote I’d ever seen: ‘You heard it here first,’” Meza told The Post. “Mike said, ‘I can’t believe you remember that! I threw my yearbook away.’ So I pulled out my old yearbook and sent him a photo.”

Meza is a Dodgers fan, but when the team didn’t advance to the World Series, he thought it would be nice to pull out the yearbook prediction.

“I was just waiting, and when the Dodgers got eliminated, I jumped back on the Cubs bandwagon,” Meza told The Post. “From there, it’s gone viral and people are even claiming it’s Photoshopped!”

After the Cubs’ big win, fans from all over couldn’t help but show their support for the new champions. Celebrities like Bill Murray, Hillary Clinton, and President Barack Obama took to Twitter to congratulate the team. Fans were also seen liking and retweeting Lee’s famous prediction picture.

Where is Lee Now?

Though Lee was available for comment last week before the Cubs won, he can’t be found for further comment by any media outlets. It is believed that he still lives in Chicago at the moment.