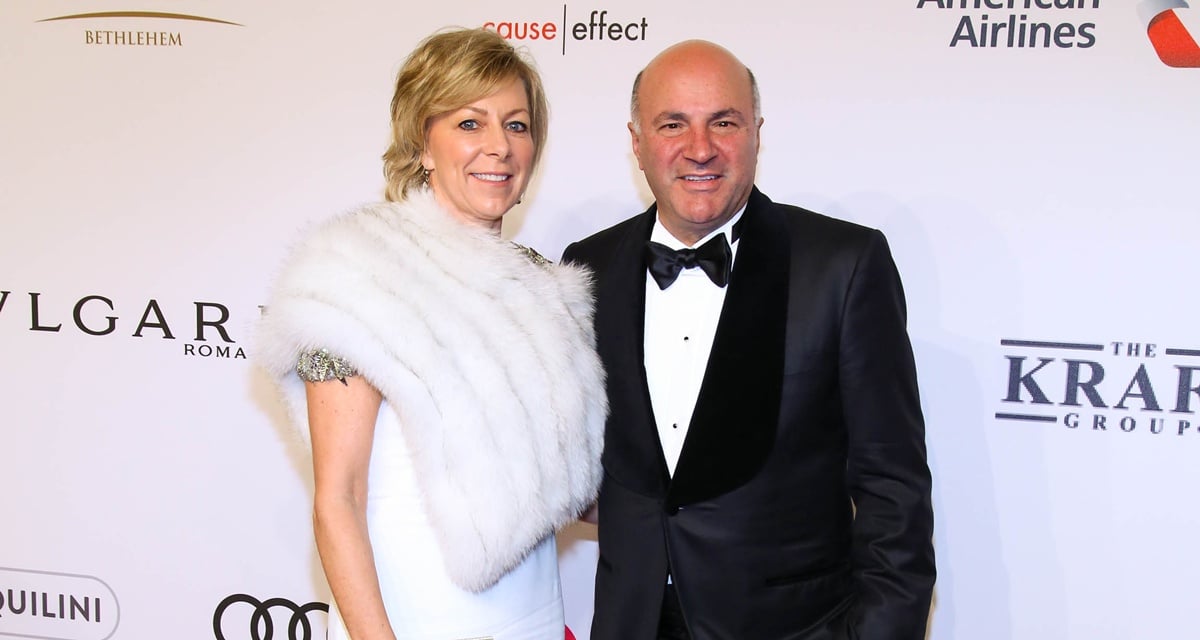 Kevin O’Leary, who is better known as “Mr.Wonderful,” is a great source of entertainment on ABC’s hit show Shark Tank. Despite all his wisecracks and shenanigans, fans of the show consider him one of the smartest investors around. Well, he wouldn’t have reached those heights without the support of his wife Linda—and, of course, the money he saved by throwing a pizza party for their wedding!

Linda O’Leary and Kevin O’Leary have been married for over 27 years now, and come across as a very cool couple. Kevin and Linda are living the high life now, but life was not always so opulent. And Kevin thanks his wife for supporting him in those thrifty years. Here are five facts about Linda O’Leary from her wiki that you probably didn’t know!

Linda and Kevin Threw a Pizza Party for Their Wedding

If we’ve learned one thing about Kevin O’Leary, it’s that he knows how to save money! And when it came to his own wedding, he didn’t really steer away from his ideologies about saving the pesos.

The couple tied the knot on March 17, 1990, and their magical day concluded with the guests being treated to a beer and pizza fest.

“I said to my wife, ‘Why go in debt?’ Let’s invite our friends over, let’s buy a few cases of beer, and I’ll order some pizza,” he explained in an interview.

Whether or not his bride was fully on board is unconfirmed, but looking at the progress they have made, we’re sure Linda is more than happy about the uber-lowkey wedding.

The couple then put the savings into Kevin’s business aspirations, and today the man is estimated to be worth a jaw-dropping $400.0 million!

Married this man 27 years ago today and what a wonderful journey we have had together! He is my true love and I am the luckiest girl in the world! #luckoftheirish? #happysaintpatricksday

She Is a Board Member of The National Ballet of Canada

Along with being the VP of marketing at her husband’s wine company O’Leary Wines, Linda O’Leary is also a board member of The National Ballet of Canada. She is also a part of their Patrons’ Council Committee and is more than proud to support ballet artists.

“Their beautiful and inspiring performances, their versatility, precision, and unity never cease to amaze me. It is so rewarding to get to know them as individuals while supporting their artistic growth and development,” she said as Chair of the Esprit de Corps.

Like father, like daughter. Linda’s father, Albert Greer, is also a recognized member of the arts community in Canada. He is a composer, teacher, and music conductor, for which he was appointed The Order of Canada in 2012. He is a graduate of the University of Toronto with a Bachelor of Arts degree. He’s a tenor soloist and composer of choral music as well.

Mr. Greer has been a teacher at many Ontario schools, such as South Porcupine High School in northern Ontario. He was also the Choral Director at York University in 1980 and has proudly directed many choirs like the North York Teachers’ Choir, North York Chorus, Toronto Youth Singers, and many more throughout his career.

Congrats to my father, Albert Greer, who was appointed THE ORDER OF CANADA for his contributions as composer, conductor and teacher. GO DAD!

How Old Is Linda O’Leary?

At 46, this lean, mean, workout machine is breaking all the old rules about life after 40. O’Leary boxes as a part of her workout, and she’s always up for physically enduring getaways with her family and friends.

Scroll through her Instagram account and you can see her playing golf, paddleboarding in Ontario’s Lake Joseph, doing a headstand on the same paddle board, playing beach polo, surfing with her daughter Savannah, and, not to forget, the partying like she’s no older than 25! The term “girl power” perfectly fits this fine lady who knows how to keep fit, look elegant, and make the most of her life as a mom, businesswoman, and wife.

Had a great workout today at this gorgeous new studio! thanks @kymherjavec5678 #thebodbykym #dancefitness #beverlyhills

She and Kevin Almost Broke Up!

In an interview, Kevin O’Leary once said that a divorce consumes the family wealth. He took his own example. He and Linda lived apart for two years and were at a point in life where they were this close to dividing their assets.

Kevin has always advised couples going through a divorce to take a 90-day period apart from one another.

This not only gives them time to cool off so they won’t make any rash decisions about divvying assets, but it also just might reignite their desire to be with each other.

The same thing happened to the O’Learys. He and Linda had decided to divide their assets, but before making the final decision, they backed out and chose to work on the problems instead.

“We have reunited and kept the family together. I’m glad we did that,” he said.

Linda Comes to the Rescue When People Call Kevin Mean

We all know how nerve-racking it can be to pitch an idea to Kevin O’Leary, but his wife thinks the opposite. He may come across as a cutthroat businessman who wants to see smart people making smart pitches, but Linda knows he’s nothing but a sweetheart otherwise.

This duo embrace the “work hard, play hard” concept like no other, and by the looks of Linda’s Instagram page, Kevin loves his mushy family time with their kids Trevor and Savannah. And he has a sense of humor as unique as he is.

While the couple’s son Trevor O’Leary graduated from McGill University in Electrical Engineering and is currently a DJ who plays at the trendiest parties around town, daughter Savannah O’Leary is a creative video producer at Purpose. She has also worked for the Huffington Post, and is a graduate of NYU’s Tisch School of the Arts.

Most fans in Linda’s comments section agree with her completely, and they make sure to leave sweet messages about how, at the end of the day, her husband Kevin O’Leary has a good heart.

Pepperoni, mushroom or veggie? Kevin earning some extra cash on the side #parttimejob #drivethrough #pizzagigi