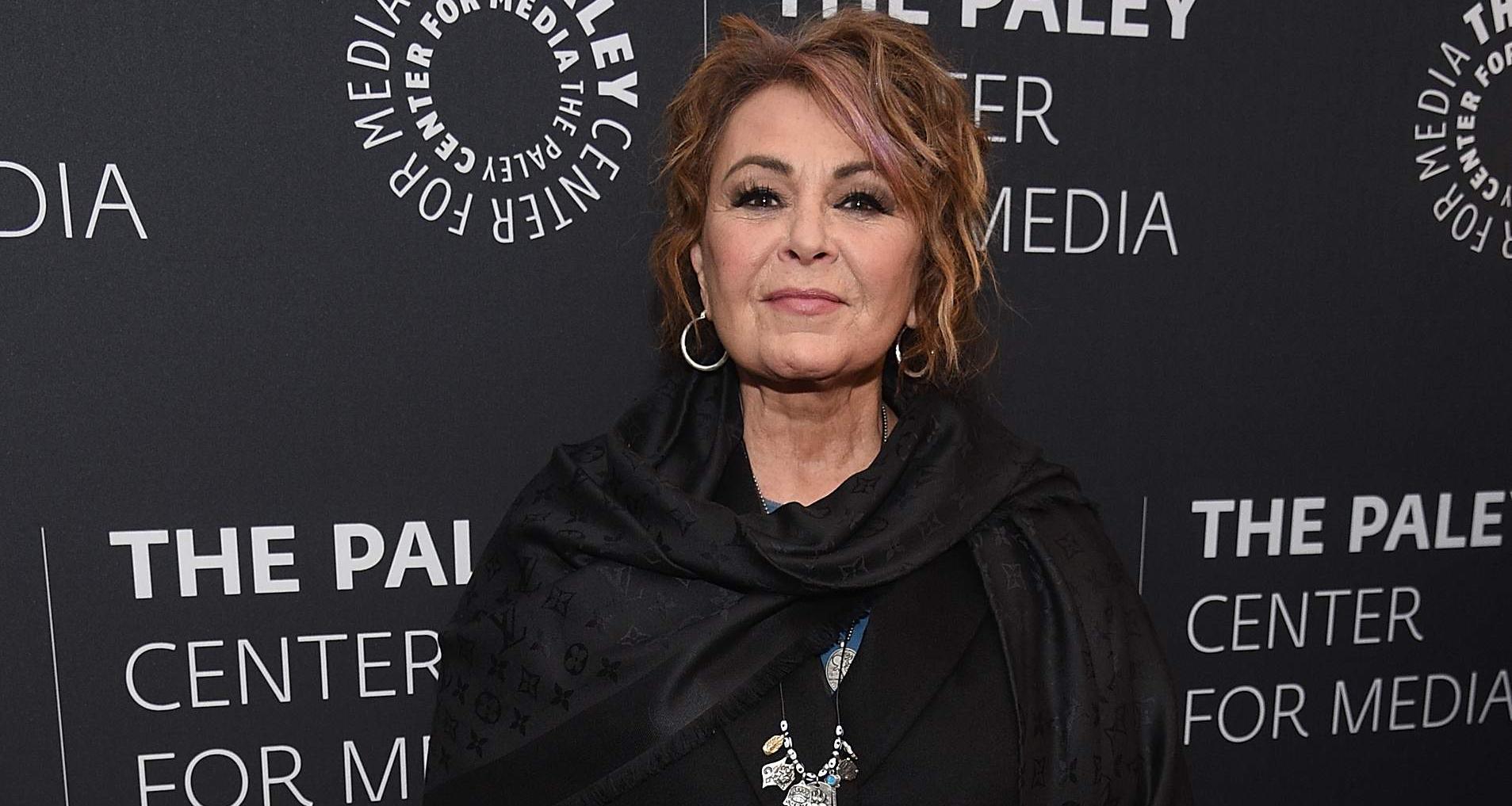 Roseanne Barr attends An Evening With The Cast Of 'Roseanne' (Photo: Dimitrios Kambouris/Staff)

Roseanne Barr performed an off-key rendition of “Star-Spangled Banner,” then grabbed her crotch, and spat on the ground.

Roseanne Barr’s racist tweet about former White House adviser Valerie Jarrett has led to the cancellation of her highly rated TV show, Roseanne. But the controversy is far from over. In fact, it has put her past behavior directly back in the spotlight. Now, social media users are pointing out that Roseanne parodied the national anthem almost three decades ago. Millennials might not know this, but Barr has a long history of uproarious scandals.

Roseanne was revived, and hugely successful. It had even already signed on for another season, so what happened? The hit TV show was canceled following the show’s eponymous star, Roseanne Barr’s racist tweet about Valerie Jarrett. She may have apologized, but it’s still a big deal.

Partly because Roseanne Barr has ignited controversy more than once.

Several young’ns find her tweets jarring, especially those about Valeriec Jarrett or Parkland survivor, David Hogg. Many of today’s youth don’t even recognize her from the earlier seasons of Roseanne, or realize what a huge star Barr was in her day. So, many might not be aware of one of her earliest scandals. Like the time Roseanne Barr sang the national anthem horribly on purpose.

The outspoken (often times appalling) comedian sang the “Star Spangled Banner” at the Cincinnati Reds vs. San Diego Padres baseball game in July 1990. No one knew what to expect from the comedian, who would release her first and only album later that year.

But they didn’t get what they thought, either.

Barr went on to shriek an off-key version of the national anthem, to the point where it was offensive. The crowd at then-Jack Murphy Stadium was very displeased and began to boo her—hard. After positively destroying the county’s most sacred song, she proceeded to grab her crotch and spit on the field, before walking off the mound, waving her arms and laughing.

Her performance managed to go viral in a time without social media for all the wrong reasons. It was on every news station around the country. And this is possibly where much of her notoriety originally came from!

Revisit the entire performance below and pay special attention to the crowd’s reactions:

She went on to talk about the incident several times over her career. She once said that she couldn’t hear over the public address system, and stuck her fingers in her ears to tune out the sound. As a result, her performance sounded ear-grating.

Barr claimed that she wanted to stop singing when she heard the crowd’s reactions. But it took her a great deal of courage to continue shrieking through it to the end.

In the past, she also faced backlash for dressing up as Hitler and eating gingerbread “Jew cookies” from the oven. (Yes, you read that right.) Roseanne was born in a Jewish family, and was unapologetic for the photoshoot. In fact, she’s been unapologetic for most of the controversial things she’s said and done throughout her career; it’s also the reason why so many either love or hate her.

And now, in 2018, Barr is no stranger to voicing her opinions online. Social media users, as one Facebook post elaborates, noted that Barr’s tweets weren’t a one-time lapse. Barr and President Trump have a long friendship, and are fans of each other. So, Barr certainly has a few Trump supporters unofficially in her corner. She also very politically charged and isn’t afraid to give her two cents, if you haven’t already noticed. 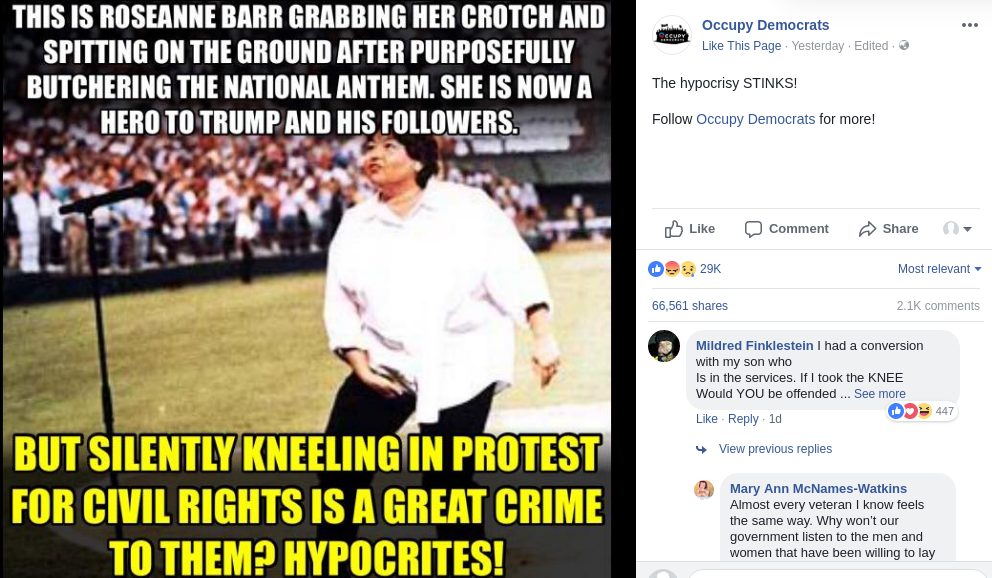 But social media users question how one can support Roseanne Barr, or why ABC even revived Roseanne after the star’s troublesome history.

Some social media users have equated Barr’s drama to Kathy Griffin’s bloody Trump. Others claim that her national anthem performance is more disrespectful and offensive than the NFL players taking a kneel in silent protest.

Was the Performance Intentional?

Long before Eli Young forgot the lyrics or Fergie’s jazzy disaster of the “Star Spangled Banner,” there was Roseanne Barr’s screech-fest.

While Fergie left everyone puzzled, there were those who still clapped. Barr’s performance was not well-received from the get-go. The crowd began booing within the first five seconds of her performance! Even then-President George H.W. Bush, who was on Air Force One, called her performance “disgraceful.”

In a press conference later, Barr apologized for the performance but traded barbs with the President challenging him to sing it better.

Though her vocal talent was hidden at that time, Barr would say a decade later that she originally intended a perfectly good, non-parody, performance. 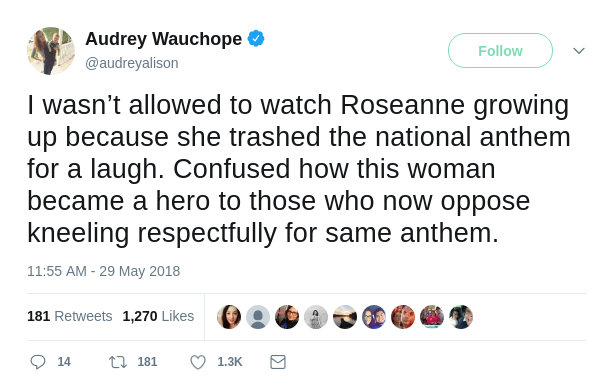 “I was singing in my act at the time – and I am a good singer – I was flattered and fully intended to sing a good version of the song,” she said.

Barr’s parody of the national anthem was meant to be taken with a grain of salt. She went on to clarify that she didn’t mean it in a vicious way. “I thought that it would be very funny,” she said. Even her then-husband, Tom Arnold aggressively defended her.

The crotch-grab and spitting are gestures ballplayers commonly did and poking fun at the athletes’ habits was a comedy trend in those days. But Barr’s seemingly intentional parody of the national anthem by doing those gestures were seen as an insult.

Yet, Barr didn’t see why it was a big deal that time.

“You’re treating me like I rode [an enemy] tank in North Vietnam,” Barr said. “I want it to stop. I don’t want to be like run out of town on a rail, that Jane Fonda right-wing frenzy stuff.”

Nonetheless, the offended public wanted someone to blame. Tom Werner, the owner of Padres and producer of Roseanne, was the unfortunate victim of public blame.

Werner, however, said that the idea for the cringe-worthy performance came from the team’s marketing VP, Andy Strasberg.

Barr later poked fun at her dark past several times over the years. She even joked that her performance was better than Fergie’s. She went on to make a mark of redemption in Comedy Central Roast, by belting out the last few bars of the “Star Spangled Banner” normally, without shrieking, and sans obscene gestures.

Even with all this time that has passed, it looks like Roseanne Barr’s failed comedy gag, along with all her past controversies, are back to haunt her. She regrets them, always, but doesn’t exactly give a clear apology. Her offensive national anthem performance was meant to be a “joke,” just as calling Valerie Jarrett a product of “Muslim brotherhood & planet of the apes” was a joke …except that, again, it made no one laugh.