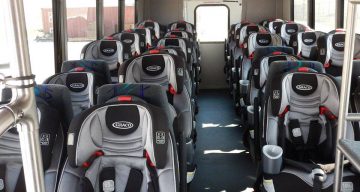 Prison bus for babies at the KCRC. Credits: Facebook

A rumor about a special prison bus for babies at the Karnes County Residential Center caused outrage on social media. But is the news true? We at EarnTheNecklace did some digging to find out the truth.

The rumor about the GEO Group, Inc. starting a new “special prison bus for babies” originated on social media, and quickly spread throughout the Internet. The GEO Group is a Florida-based company specializing in privatized corrections, detention, and mental health treatment, with facilities in North America, South Africa, Australia, and the United Kingdom.

A rumor claims that a prison bus for babies has been started. Credits: Facebook

Prison bus for babies. Your new gestapo at work. https://t.co/potTlIMMdw

Ever since the rumor went viral, people have taken to social media to express their opinions about this supposed new service. Many have criticized the new facility that is supposedly at the U.S. Immigration and Customs Enforcement’s (ICE) largest family detention facility, the Karnes County Residential Center (KCRC).

No Truth in the Rumor

But it is all false! The GEO Group did not start a prison bus service for babies, therefore the rumor has no truth to it. What they have done is provide buses for children between the ages of four and 17, so they can go on field trips to a variety of places like the San Antonio Zoo, the park, and theaters.

This is what WH wants to spends our taxpayers dollars on,Supporting school programs,education,teachers Pay,College tuition for Adults and Youth to further or continue education,
Transportation babies in this prison Bus,
Is A New LOW,Shameful…… https://t.co/K6fTyFZn6Z

Some people have questioned the logic behind spending taxpayer’s money on transporting babies in a prison bus, and commented that this is a new low even for the White House. Some added that the GEO Group, Inc. providing a prison for babies is not a new phenomenon and were not even shocked by the rumor.

Busses Meant for Children, Not Babies

The article from where the viral photo was taken is of a bus that was introduced to provide offsite field trips for children, as part of a contract with ICE. These children were enrolled in educational programs provided by John H. Wood Charter School, located at KCRC.

It is clearly mentioned on the company’s official website that they introduced two buses to carry the increased number of the children for offsite field trips.

On February 4, 2016, they delivered two new fleet vehicles to the KCRC for contractual obligations. One vehicle is an 18-seat passenger bus that is ADA compliant, with a rear wheelchair lift system. The second has 26 seats. Neither vehicles have standard GTI security equipment like steel cages, window bars, or screens.

Both were outfitted with standard commercial grade cushioned seating. Each seat has a convertible child safety seat, and at every loading, children are assisted into the safety seat systems either by a nurse, teacher, or case manager, and secured into the harness system.

A far cry from a prison for babies!